When Chicken Fingers Come Off the Menu 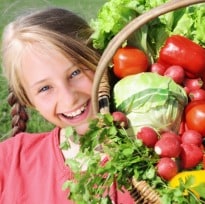 When a friend mentioned last year that her 7-year-old daughter had gone vegan, I stifled a sigh of relief. "Thank God I'm not raising children in Brooklyn," was my smug little thought.

What a fool I was. This summer, my 9-year-old returned from sleep-away camp a vegetarian.
I felt her eyes on me as I frantically chopped up a defrosted chicken before dinner one evening. "How is it OK to eat other animals?" she murmured. "What did they ever do to us?"
I mentally rummaged through and discarded potential answers:

Whereas pickiness was formerly seen as a character flaw, a failure of parenting or just plain bad manners, it can now acquire a veneer of health, mindfulness and principled ethics. Kids aren't being picky; they are choosing.

An April 2014 poll of 1,200 Americans conducted by Harris Interactive for the Vegetarian Resource Group found that 4 percent ages 8 to 18 identified themselves as vegetarians. That's roughly 2 million children, including a half-million vegans. Bookstores teem with volumes like "The Complete Idiot's Guide to Vegan Eating for Kids" and "Give Peas a Chance." Perhaps inevitably, a sequel to the 2011 best-selling book "Go the ____ to Sleep" is scheduled to come out this fall. The title: "You Have to ____ing Eat."

Alas, parents have never had as much control over what their children eat as they'd like. Between the opposing poles of restriction and freedom - the carrot-apple bars and the Hostess cupcakes at the bake sale - lies a vast and unruly playing field of "No, thank you." There are the children who won't eat anything green, the children who will eat only food that is white, the children who insist their cheese be the kind that comes in individually wrapped, artificially colored yellow slices (they know who they are).Even without child-imposed parameters, parents have plenty to freak out about when it comes to their children's eating habits. Allow your kids to consume everything and manage their own choices, and you could add another statistic to the nation's obesity epidemic. Ban lollipops and muffins that don't pretend to be anything other than cake, and you could wind up raising a neurotic diet obsessive or, devastatingly, a child with an eating disorder. At a minimum, every parent in your child's classroom will hate you.

I can see where my daughter's choosiness comes from. Among the elders in my family lies a litany of gastronomic foibles. My father, the son of a meat market owner, refused to eat any food that was white or, he claimed, that began with the letter Y, putting yogurt in a verboten category all its own.

I'm probably worse: I can't eat cheese or butter unless it's fully melted. I have not willingly had a sip of milk since toddlerhood. And I stopped eating red meat at 14 out of pure squeamishness after venturing into the meat locker basement of the Turkish restaurant where I worked. At least my daughter can claim a higher moral cause.

I know I should be glad she has joined the ranks of conscientious consumers, aligned with those 6-year-olds who eschew added sugar and refuse nonorganic fruit. She eats arugula and radishes and is arguably the greenest member of the family. I now have someone to share the evening's salad with before it wilts.

Still, I fear I am doomed to turn into the dreaded Restaurant Mom, tailoring meal planning to each of my children's fancies. For the most part, my other two kids continue to live in a world of chicken and cheese, although pasta now comes with turkey meatballs or chicken sausage on the side, leaving my once-cherished turkey Bolognese recipe dormant. I broil fish, resigned to the fact that one child's plate will remain unsullied while the other two choke down their required dose.

Other parents envy their friends' kids' grades or manners. I envy their eating habits.
"How come their child likes sushi?" I'll wonder. "Why doesn't my kid willingly eat chia?"
Other people's children gobble up Gwyneth Paltrow's "green potato chip" recipe (roasted kale; my kids are not fooled). Other people's children tolerate protein unadorned with breadcrumb coating. Many nights, I find myself mournfully tabulating the cost of the brutally ignored or merely prodded morsels that are scraped off our plates at the end of a meal.

Paradoxically, other parents praise my daughter's chosen path.
"That's fantastic," they exclaim when she tells them, looking at me in admiration, while peppering her with questions about her decision process.
I have to suppress interjecting, "Don't encourage her."

The truth is, with the occasional exception of ice cream (which I find myself foisting on her - "No, not the sorbet!"), my daughter is essentially vegan. Inside my head, some long-dead and forgotten Jewish maternal relative's voice ricochets between "How will she get enough protein?" and "Maybe she'll get over it."

In the meantime, I've learned to cook chickpeas seven different ways, including a stir-fry with cumin that two out of three children will eat. My daughter showed me how to whip up a delicious rosemary white bean dip. She eagerly sticks Post-its into my dusty copy of "Bean by Bean" and leaves it on the kitchen counter.

Perhaps one day, like her mother, my daughter may become prone to the typical American inconsistencies, drinking overpriced bottles of raw ginger-lemon juice before foraging for Twizzlers in the office candy drawer, all the while vaguely wondering whether a wheat-free diet may propel her to a higher plane of consciousness. For now, she's well ahead of me. I can only fret over what to make for dinner tonight.

Listen to the latest songs, only on JioSaavn.com
Image via Thinkstock