Women and Yogurt: What's the Connection? 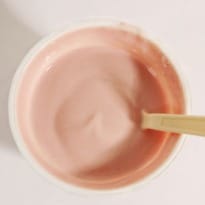 Advertising in western society seems to have decided that yogurt is a product that is enjoyed solely by women. Is this the case? If so, what scientific reasons could there be for this dairy-based gender bias?

When war is seemingly looming, the environment is heading for disaster, we're growing brains in jars and everyone is spying on everyone else, it's vital that we don't lose track of the more important things in life. Like yogurt. And, perhaps more crucially, why is it supposedly only women who eat it?

Yogurt is a fairly innocuous substance, occupying the midpoint between milk and cheese on the dairy spectrum, without being considered as much a staple as the former or as much of an indulgence as the latter. It seems to hide in something of a blind-spot in the minds of most people. The UK buys more yogurt than ever, but 10% of all yogurt bought is thrown out uneaten. There are numerous possible reasons for this, but they're probably boring. Yogurt is boring, let's face it. However, there is one fascinating thing about yogurt; it is apparently exclusively eaten by women.

This sounds far-fetched, but manypeoplehavenoticed this. At some point, someone in western society decided that men don't eat yogurt. To date, the only known example of a man liking yogurt is comedian Richard Herring, who dedicated a whole show to the matter (you should buy it, it's good). But one example from one half of the population isn't statistically significant.

So why this blatant gender imbalance? Is it just sexism, or something more profound? As always, the world of science may offer some answers.

Yogurt is actually a very old foodstuff, going back an estimated 8,000 years. Yogurt was also a staple food of Genghis Khan and his army, and the words "feminine" and "Genghis Khan and his army" rarely go together. However, yogurt is also associated with India. Much Indian cuisine incorporates yogurt. In Punjabi, yogurt is a female noun, and if western culture learned about yogurt from India, this could this be a demonstration of the Sapir-Whorf hypothesis, which argues that the language people use influences how they think and perceive the world.

Also, yogurt is often used to temper the effect of spicy food. Eating needlessly hot spicy food is a typical way to demonstrate your machismo, so eating yogurt could be seen as a threat to your masculinity, if you're a man who cares about such things. And all men do!

The biological usefulness of yogurt is generally well accepted. It can even be consumed by those with lactose intolerance. However, most yogurt advertising emphasises its supposed improvement of the digestive process. Women have less-efficient digestion than men, evidenced by the fact that they apparently never break wind. Anecdotal evidence suggests that many women never even defecate. Obviously this has negative biological consequences. You can observe these directly; simply spend a few minutes explaining to a woman why she's biologically compromised and you will observe her eyes rolling, random sighing or even her face turning red, all likely consequences of internal gas buildup. As a result, it may be essential that they eat more yogurt, in order to maintain a healthy level of digestion.

Yogurt consumption is also believed by many to help you live longer, but as men die younger in general, yogurt may be wasted on them. Also, regular yogurt eating helps prevent vaginal infections, but men are totally immune to these for some reason.

One of the main things known about yogurt is that it contains cultures, or bacteria. "Good" bacteria, that is (although separating all bacteria into either good or bad categories is probably worryingly oversimplifying things). However, bacteria are normally associated with poor hygiene and illness. As has been discussed before, men aren't allowed to get ill. Perhaps the association between germs and yogurt is off-putting to the male members of the population?

It could be that the gender bias in yogurt appreciation has evolutionary origins. There are several "alternative" theories of how men and women developed. One theory argues that females are made of "sugar and spice and all things nice" whereas males are made of "slugs and snails and puppy dogs' tails". If females are composed of clumps of inert compounds that are considered pleasant to most humans, then perhaps they would be more tolerant of yogurt than the colony organism that is the typical male.

There is also another theory, seemingly derived from the notion of panspermia, that men are from Mars and women are from Venus. Venus is the hottest planet in the solar system, so any endotherm originating from there would have a correspondingly high internal temperature, and may appreciate the cooling effects of yogurt. Mars, on the other hand, is a lot cooler. Anything from there may shy away from cooling substances, and appreciate things like spicy food (see above).

Western society is unquestionably still dominated by heterosexual males, and, at the risk of being incredibly crude, perhaps the sight of other men happily consuming viscous white fluid makes them a bit uncomfortable? It's fine if women do it, of course. That's not an issue.

One of the more outlandish theories behind this gender bias is that yogurt is traditionally marketed as a sweet thing, and in the world of advertising, which logically has to cater to as many people as possible at once, males and females are regularly reduced to a collection of rather patronising and simplistic stereotypes. Women like dieting, desserts and looking nice, whereas men like beer, sport and meat. Stuff like that. Ergo, yogurt would primarily be marketed at the former group.

Of course, this is all just speculation. But still, we shouldn't shy away from tackling the big issues like this.