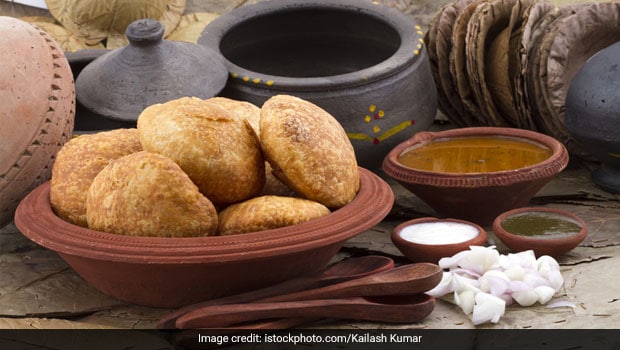 How to make Lachedar Kachori

Prepare the spicy flavourful filling and follow this recipe for a restaurant-like crunch with every single bite of your homemade kachori. Sounds appetising? Try it out!

How to Make Lachedar Kachori

1.
In a bowl, add maida, ajwain, some salt and half of the ghee and mix lightly until it holds shape. Add water in batches and make slightly hard dough.
2.
Let the dough rest until you make the stuffing.

1.
In a pan heat oil, add jeera, coriander, ginger, hing, haldi, besan,red chilli powder and mix properly.
2.
Now add the potatoes and mash until everything is well combined.
3.
Once done, add salt, amchur, coriander and chillies, give it a final mix and take off the heat and let it cool for some time.
4.
Now take the dough and make 4 big roti out of it, keep it aside.
5.
In another smaller bowl, take the remaining ghee, add rice flour and mix until it is a smooth paste.
6.
Now take one roti, add some of this ghee paste to it and spread it evenly with your hands.
7.
Place another roti on top and repeat the same process until all 4 rotis have been layered together with the ghee paste.
8.
Now tightly roll the rotis together and make long dough out of it.
9.
Cut small-sized portions out of the longer dough and roll small rotis out of them.
10.
Make sure to be gentle while rolling the smaller roti and don’t flip sides.
11.
Now take a small roti, add a spoonful of stuffing to it and cover with another small roti.
12.
Press the sides firmly, use water to press if necessary.
13.
Heat a kadhai full of oil and fry them gently in medium flame. The lachedar kachori is ready to be served.