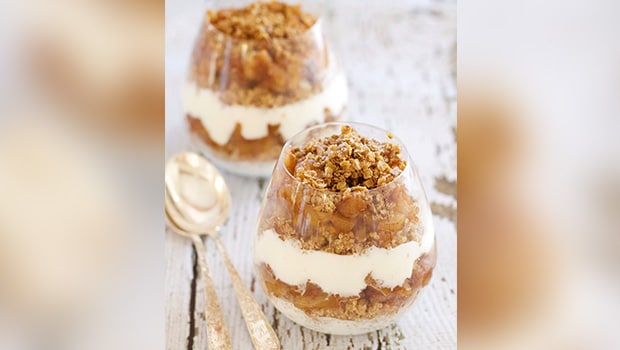 About Quinoa Coconut Crumble Custard Pudding Recipe: Packed with the goodness of quinoa, here is a delicious pudding you are going to love indulging in without any guilt! Crunch of nuts and coconut, oats and quinoa topped with luscious custard pudding makes for a heavenly dessert!

1.
Preheat oven to 305 degrees.
2.
In a large mixing bowl, add cooked quinoa, oats, and chopped nuts. In a separate smaller mixing bowl combine cinnamon, brown sugar and salt. Add the spice mixture to quinoa and oats. Stir in chopped nuts once and combine and add eggs and mix until combined.
3.
Scoop into a sprayed mini moulds and make sure the mould is thoroughly sprayed.
4.
Bake for 15-20 minutes and let cool.
5.
Once cooling done crumble it and store in air tight containers. This can be served warm also like serving cookies dipped with chocolate.

1.
Ace quinoa in a mesh colander. Risen thoroughly with cold water and allow to drain.
2.
In a medium pot, combine quinoa, coconut milk, maple syrup, vanilla extract, cinnamon, honey and salt.
3.
Bring to boil over medium heat. Reduce heat to low simmer and cover, leaving the lid cracked so that some steam may escape. Simmer for 25 minutes, stirring about 5 minutes.
4.
Remove the lid and continue simmering for 5 more minutes or until the pudding has thickened and the quinoa has absorbed most (but not all) of the milk. Remove from the heat.
5.
Prepare the serving glasses or bowls filled half above made quinoa crumble. Then top of it pour the quinoa custard pudding.
6.
While layering the pudding in between also can be added the fruits and nuts.
7.
Pour into the bowls and allow to cool for few minutes before serving (pudding will continue to thicken as it cools) Sprinkle with additional cinnamon, honey, nuts or fresh fruits on top if desired.