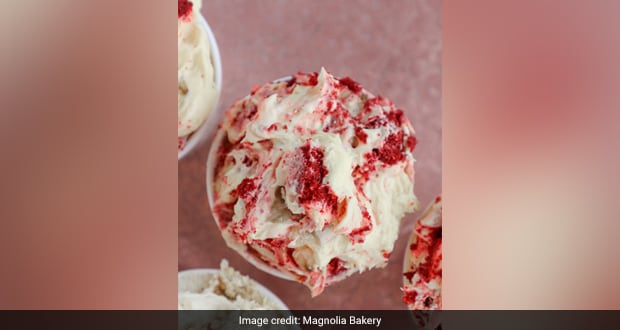 About Red Velvet Banana Pudding Recipe: Here's a pudding recipe that combines two of your favorites - freshly-baked red velvet cake and classic banana pudding - to create a delicious new flavour that’s the perfect way to indulge in some sweetness. Directly from the kitchens of Magnolia bakery, here's something simply irresistible!

HideShow Media
1.
In a small bowl, on the medium speed of an electric mixer, mix the sweetened condensed milk and water together until well combined, about 1 minute.
2.
Add the pudding mix and mix until there are no lumps and the mixture is smooth, about 2 minutes. Cover and refrigerate for 3-4 hours or overnight.
3.
Place the pudding mixture into the mixer bowl with the whisk attachment, add the cream cheese to the pudding mix. Mix until thoroughly combined and smooth.
4.
Place in the refrigerator while you prepare the whipped cream.
5.
In a clean mixer bowl with the whisk attachment whip the heavy cream on medium speed for about one minute until the cream starts to thicken, then increase the speed to medium high and whip the cream until stiff peaks form. Be careful not to over whip.
6.
Carefully add the pudding mixture into the whipped cream and mix on low speed until well blended and no streaks of pudding remain.
7.
Cut the red velvet cake into 4-inch squares. Cut each square into ½” layers. Set aside.
8.
To assemble the pudding select either a trifle bowl or a wide glass bowl with a 4-5-quart capacity.
9.
Spread a layer of pudding on the bottom and layer with enough slices of the red velvet cake to cover the layer, add sliced bananas to cover the cake and sprinkle with 1/3 cup of mini chips.
10.
Continue layering with 1/3 of the pudding mixture, another layer of cake, sliced bananas and mini chips.
11.
Repeat one more time, ending with pudding. Sprinkle the top with crumbled red velvet cake and a tablespoon of mini chips. Cover tightly with plastic wrap and allow to chill in the refrigerator for 4 hours or overnight before serving.

1.
Preheat oven to 350 degrees. Grease and lightly flour three 9 x 2” qround cake pans, then line the bottoms with parchment paper circles (or wax paper). If making cupcakes, line 2 dozen cupcake liners with paper liners.
2.
In the bowl of the electric mixer fitted with the paddle attachment, combine sugar, cocoa powder, cake, flour, baking soda, and salt. Mix on low speed for one minute. Turn mixer off.
3.
Add the butter to the mixer bowl all at once. Mix on low speed for 2- 3 minutes until mixture resembles wet sand.
4.
In a liquid measuring cup whisk together the eggs, milk, sour cream, cider vinegar, vanilla extract and red food coloring.
5.
Turn mixer on low and slowly pour in the egg mixture, mix for one minute. Remove the bowl and paddle from mixer and scrape down sides, paddle and bottom of bowl.
6.
Place back on mixer and mix for one or two minutes longer just until fully incorporated.
7.
Divide the batter among the prepared pans. Bake for 38-40 minutes, or until a cake tester inserted in the center of the cake comes out clean.
8.
Let the layers cool in the pans for 1 hour. Remove from the pans and cool completely on a wire rack.
9.
If making cupcakes: Carefully spoon the batter into the cupcake liners, filling them about three-quarters full. Bake for 20-25 minutes, or until a cake tester inserted into the center of the cupcake comes out clean. Cool the cupcakes in the tins for 15 minutes. Remove from the tins and cool completely on a wire rack before icing.
10.
In a medium-size saucepan, whisk the flour into the milk until smooth. Place over medium high heat and cook, stirring constantly until very thick and bubbly, making a roux.
11.
Remove from the heat and transfer to a glass or metal heatproof bowl. Place a piece of parchment paper or plastic wrap directly on the surface.
12.
Cool to room temperature before placing in the refrigerator. Chill for at least an hour. Can be made ahead up to 2 days.
13.
To make the icing, remove the roux from the refrigerator and bring it to room temperature for about 30 minutes.
14.
In the bowl of the electric mixer with the paddle attachment beat the butter on medium speed for 3 minutes, until smooth and creamy.
15.
Gradually add the sugar in ½ cup increments, scraping down the sides and bottom of the bowl occasionally, until all the sugar has been incorporated beating continuously for 3 minutes until creamy and light in color. Add the vanilla and beat well.
16.
Add the cooled milk mixture. Beat on the low speed for 10-15 minutes, until very smooth and white in color.
17.
Scraping down the sides and bottom of the bowl occasionally.
18.
Cover and refrigerate for 15 minutes (no less and no longer – set a timer!).