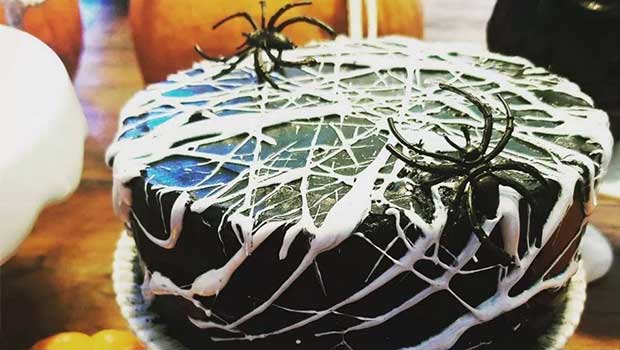 How to make Spider Cake

This sweet and spooky spider cake is sure to cast a spell on everyone this halloween.

How to Make Spider Cake

HideShow Media
1.
Heat oven to 180C/160C fan/gas.
2.
Grease three 20 cm round cake tins and line the bases with baking parchment.
3.
Put the cocoa in a bowl, add 280ml boiling water and whisk until dissolved.
4.
Pour in the stout, mix then well and set aside to cool.
5.
In a stand mixer or a large bowl using an electric hand whisk, beat together the butter, both sugars and vanilla extract until light and fluffy (about 5 mins).
6.
Add the eggs little by little, mixing until fully incorporated before adding more. Once all the egg has been added, spoon in the melted chocolate and mix to combine.
7.
In another bowl, mix the flour, bicarb and 1/2 tsp salt. Add this mixture to the butter mixture in three stages, alternating with the stout mixture (which will be very runny).
8.
Pour the batter equally between the prepared tins and bake for 25-30 mins until a skewer inserted into the cake comes out clean.
9.
Leave to cool in the tins for 10 mins, and then turn out onto a wire rack to cool completely.
10.
To make the buttercream, put the egg whites and sugar in a heatproof bowl and set over a pan of gently simmering water.
11.
Stir with a whisk until the sugar has dissolved and the mixture is warm to the touch. Remove the bowl from the heat and beat with an electric hand whisk on high speed until the mixture has tripled in volume and has cooled down.
12.
Slowly add the butter 1 tbsp at a time while continuing to whisk. Once all the butter has been added, the mixture should look glossy and thick
13.
To assemble the cake, put one of the cake layers on a cake stand and top with a layer of buttercream. Repeat with the other two layers. Spread the remaining buttercream all over the cake, using a spatula or palette knife to smooth the sides. Chill for 1 hr or until the buttercream is firm.

1.
Melt the marshmallows in a heatproof bowl set over a pan of simmering water, stirring from time to time.
2.
Remove from the heat and put to one side for a few mins until the mixture is cool enough to handle.
3.
Use your fingers to grab a small amount of the marshmallow and stretch it out to form long strands (dipping your fingers in vegetable or sunflower oil will help!)
4.
Drape the strands over the cake in a random pattern, so it’s thoroughly covered.
5.
Create a spider using the sugar paste (roll two balls, one bigger than the other, for the body, and thin strands for the legs) and place on top of the cake.
Tags:
5
Share Recipe
Share Recipe