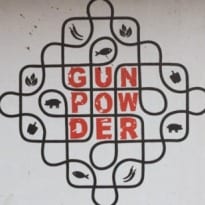 Every once in a while an evening turns out to be so good that you wish you could replicate it, and yet you know that's easier said than done.

After an overdose of visiting restaurants which are known for all the wrong reasons, it was refreshing to fix up a program to go for dinner to a place that's known not for its ambience, ridiculous prices (which these days seem to attract more people than dissuade them) or for who you rub shoulders with, but simply for good food.

It was close to 11pm, and after downing a few beers, we meandered through the narrow streets in Hauz Khas Village in  search of a little restaurant called Gunpowder. After climbing a narrow flight of shady looking stairs, we reached the top of the complex and entered what looked like a stylish dhaaba.  Brick exposed walls, pure cotton tablecloths, basic seating with an open kitchen. Then came the menu which was just two simple sheets of paper. This place is different and it wants you to notice.

Now, I know already that it's known for its Malabar, Chettinad and coastal food of India, and am surprised to see a bunch of foreigners occupying many of the 30-cover restaurant. Clearly, the foreign palate is not so averse to what is supposed to be fiery South Indian fare.

Order given, we got down to drinking some chilled beer, one of the big attractions of the place. It serves beer (only beer in fact) and so we could have our last beers after having consumed many prior to that at one of our houses. The beer was served in some quaint cups with a Teflon coating.  But our spirits were too high to either care or focus. The beer was chilled and that's all that mattered.      Now, this dinner was with my immediate gang of friends, who did not hesitate to loudly proclaim that I shall do all the ordering and then did not let me get in a word edgewise when I tried talking to the waiter.

The result was we ordered almost everything on the menu.
"I want Malabar Paratha"
Order two chicken, two mutton.
This Egg Appam sounds great.
Mutton will be nice, let's do fish with gravy yaar".

I spot something that's going to the table next to ours.
"I'll have what she's having" .  I was having my "When Harry Met Sally" moment.

And then the food was served, it was one dish after the other, and didn't stop for a while.  Let me mention here why we ordered so liberally. One, because the menu was ridiculously well-priced, and because we were hungry at close to midnight.

The first dish to appear and disappear even quicker was a sookha mutton, so tender, so dark, so light.  Then came the prawns and the fish.
" Excuse me boss, you didn't get me the mutton paranthas."
"But, there it is on the table."

This paratha looked like a cross between shredded mutton and a scrambled egg.  I was hard pressed to look for a regular flour base. A dream for someone on an Atkins diet.

For a quick lowdown on the food, the prawns were in a tomato and onion gravy - a tangy masala. The fish was in a coconut gravy, a bit too strongly flavoured for my palate, but then again I am just not a fish curry fan, give it to me grilled, steamed, deep-fried, any which way.  The vegetarian dish was a korma, very neatly spiced with loads of cinnamon. Soondal - a vegetarian starter made of chick peas - was excellent and disappeared before I could take a second look. I avoided a watery looking plate of lentils (a maharashtrian dal that one could avoid, the vegetarian in our group declared) that paled in comparison in sheer looks, in the midst of this otherwise superlative khana. The Malabar parotta was fabulous - soft yet crisp and helped bring out the flavor of the individual dishes.

Listen to the latest songs, only on JioSaavn.com
All in all, every dish tasted different, managed to look different, and had a distinct flavour. My picks : backwater prawn masala, mutton parotta and mutton ularthiyathu.

It was quite clear to me now why this place had only 30 covers and why you wouldn't stand a chance of getting a table unless you had booked well in advance. Oh, and did I mention, you can book a table on Facebook