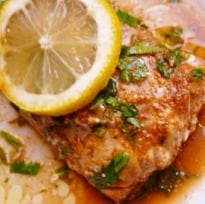 Lemons left drying in the fruit bowl or lolling in the fridge? Our Dinner Doctor squeezes out some zesty recipe tips

Lemons have to be one of my favourite ingredients. Whether I am using them to perk up salads or puddings or to marinade meat or fish, they inject a welcome zesty sweetness to many different types of recipes.

I store mine in a paper bag, rather than the fridge. But I did wonder whether storing them in the fridge would extend their lifespan or whether it might impact on their flavour or juiciness in any way.

So about three weeks ago, as not terribly scientific experiment, I bought nine lemons. Three were stored at room temperature in a paper bag and left on the kitchen counter; three were just left in the fruit bowl and three were stored in a plastic Ziploc bag in the fridge.

The six lemons stored at room temperature all hardened and began to dry out after a week. The lemons in the fruit bowl showed signs of softness in places, as if they were about to go mouldy. The ones in the paper bag had hardened. After two weeks, these lemons were very hard indeed and not very juicy at all.

The lemons in the best condition were the ones stored in the fridge. They hadn't hardened at all and yielded more juice than any of the others. After three weeks, the one remaining lemon in the fridge is still juicy. The last lemon left in the paper bag is just about usable, but only just. The one left in the fruit bowl is looking a bit sorry for itself.

I have two ways of getting as much juice out of my lemons as possible. Either roll the whole lemon on a hard surface, pressing down with the heel of your hand. It helps to break down the fibres in the lemon flesh and release more juice. The second way is to give the fruit a blast in the microwave, in 10-second bursts. I wouldn't warm the lemon for more than about 30 seconds in total, because, as I know to my cost, you end up slicing into a hot and explosive citrus bomb!

Lemon is the perfect addition to any marinade for fish, although don't let it sit too long in the marinade as it will begin to "cook" the fish.

Combine all the ingredients for the chermoula marinade together. If you want a well-blended result then use a food processor.

Spread all of the chermoula marinade bar about 2 tablespoons over the fish fillets, making sure that both sides are well-coated, and leave to marinade for at least 15 minutes but no more than 30 minutes.

Bake the halibut for about 10 to 12 minutes, depending on their thickness, until the fish is cooked through.

Place a fish fillet on top and spoon over any of the cooking juices together with the remainder of the uncooked chermoula marinade.

I often cook for friends' parties and this is one of the dishes I'm frequently asked to make.

Thanks to the British weather, we haven't had much of a summer this year; so this grilled chicken dish is a taste of summer all year around.

Ingredients:
16 chicken wings, trimmed and snapped (or chopped) in half

Combine the grated onion and any onion juices with the rest of the marinade ingredients. Adjust the seasoning to taste. (You could actually bung the whole lot in a blender and whiz up until roughly combined).

Prepare the chicken wings by trimming any extraneous bits of fat or droopy bits of skin. Snip off the wing tips with a pair of scissors. Snap the wing bone joint so that you have two relatively similar sized pieces for each wing. This means that they will cook more evenly.

Pour the marinade over the chicken pieces and cover. Refrigerate for at least 6 hours (or preferably overnight for a fuller flavour). Turn the pieces occasionally to ensure that the flavour is able to permeate the chicken pieces.

Shake off excess marinade before putting the chicken under the grill. Cook the chicken for about 8 to 10 minutes on each side (or until a golden crust has formed). As you turn the chicken baste with more of the marinade.

Other ideas for using up a small amount of lemon

3. My apple butter, a cross between membrillo and marmalade, is made with apples, lemon juice and a little lemon peel. It's perfect with cheese or just spread on toast.

6. Rupert Kirby of Casa Rosada enters into the spirit of using up leftovers by making an intriguing marmalade with piquillo peppers and lemon zest.

8. Use a mixture of breadcrumbs, garlic, parsley and lemon zest as a topping for baked vegetables such as courgettes. It's great as a breading for meat too.

9. Try this lovely zesty salad from Camilla Hawkins of Fab Food 4 All; chicken and tarragon dressed with lemon.

10. Janice Pattie of Farmersgirl Kitchen uses the zest of half a lemon in her lovely spicy rhubarb muffins.

11. If you're able to forage up some nettles, Choclette uses half a lemon to make these unusual nettle cupcakes. The other half is used to ice them.

12. Siobhan McGuinness of Vohn's Vittles uses a little lemon juice in what she calls her "father of all prawn cocktails"!

13. If you have some broad beans, fresh or frozen, add some lemon juice to make this vibrant broad bean hummus spread.

14. Louisa Foti makes this simple, family-friendly pasta dish with a squeeze of lemon.

16. As you can imagine, I had some lemons leftover, after writing this piece. I put my lemons to good use and made a zesty cream sauce for pasta.

17. Carl Legge, a sustainable blogger of the week, makes this classic persillade, a lovely way to preserve parsley in oil with garlic and lemon juice.

Are you like Choclette or Galina, enjoying a slice of lemon in a cup of Earl Grey tea? Do you freeze your bits of lemon to perk up a refreshing G&T? Have you got the perfect lemon marinade or salad dressing? Or have you got any tips on getting more juice from your lemons?