Done with soda-based drinks, iced teas and other coolers? Looking for something more wholesome? These flavourful milkshakes are what you should be looking for. 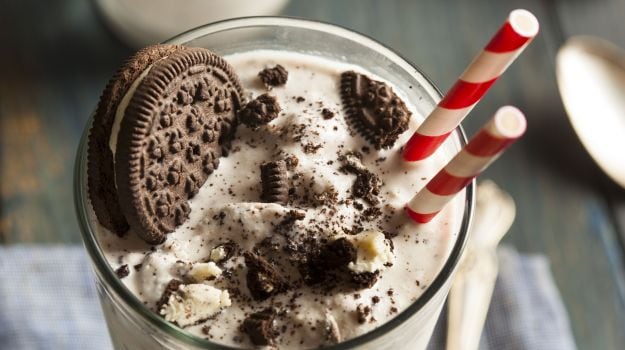 Gone are the days when milkshakes were just supposed to be simple, cold beverages to be enjoyed during summers. The indulgently loaded shakes available today are well capable of being counted as a meal in itself. Done with soda-based drinks, iced teas and other coolers? Looking for something more wholesome? These flavourful milkshakes are what you should be looking for. And we've picked eight best milkshake places across Delhi to help you with the endeavour. Ready for a creamy surprise?

The beautiful double storied cafe with outdoor seating, situated opposite Gargi College, has garnered eyeballs of both college-going students and families for its ambience, delicious food, generous portions and quick service. Another reason to check out the beautiful cafe is its mouthwatering shakes and smoothies. The must-haves include Choco Mocha Shake (where sweet and sinful chocolate is combined with the bitter strong flavour of coffee), Strawberry Cheesecake,Berry Blast, and Chocolate Brownie. Drooling already?

One of the city's favourite hangout spots, Social Offline with its lip-smacking delicacies has earned a special place in all our hearts. The sinfully loaded shakes of Social are both, a culinary and visual delight (much like most of social's food). Try their Mud Pot shake, which is served in plastic mud pot, topped with sprinkles of biscuit crumbs, and chocolate or the Special Social Cake, which is chocolaty and loaded in every part. Sinful, indulgent and totally worth it!

With every new outlet, Big Yellow Door continues to grab eyeballs and for good reason. BYD now has two outlets in Hudson lane, and one outlet in Satya Niketan, bustling at all times with college students enjoying their plates of pizzas, pastas and nachos, and the wholesome BYD shake, which you happen to spot at almost every second table in the cafe. What makes the shakes such a favourite? The generosity with which they pick and use their ingredients to give you the best shake experience. Try their Rocky Road Shake, Red Velvet and Apple Pie Shake.

Ever since its establishment in 2000, Big Chill has continued to be the most popular haven for the sweet tooth cravings in South Delhi. If you happen to be a fan of their gooey mud cakes and blueberry cheesecakes you will also be impressed by its wide variety of shakes, be it the Belgian Chocolate Shake, Midnight Mint Shake or the Chocolate Banana Oreo Shake. Their shakes are loaded, heavenly, scrumptious and worth every penny.

he milkshake royalty is fast expanding its branches into every possible nook and cranny of the city, and we can't be happier. We've all heard about their lip-smacking shakes, we had some ourselves, and each of us, harbor a secret desire to try all their flavours one day. Satisfying the creamy cravings of its loyal customers for decades, Keventers shakes are a must have, if you haven't had your fill already. Butterscotch, mango, chocolate, pineapple, and strawberry, Keventers await you with a blast of flavoured milkshakes in its nearest outlet. What are you waiting for?

Mocha Fudge, orange, banana, Strawberry banana, Strawberry oreo crumble, Chocolate peanut butter, Johnny Rockets's sumptuous list of flavoured milkshakes gloriously adds to the quintessential American fare of Johnny Rockets, which has helped rocket the popularity of the restaurant in such little time of its establishment. Amongst their must-haves are their Strawberry Milkshake loaded with juicy bits of strawberries and vanilla ice-cream and the buttery and creamy, Chocolate peanut butter shake.

7.Scooter on the wall

One look at their frothy, and wholesome shakes on the next table, would make you forget your entire order and call for one of those beauties for yourself. Scooter on the wall's extensive list of shakes is bound to leave you spoilt for choice. Their must haves are, Princess shake( a creamy delight of red velvet cake, strawberry , topped with cream and little heart biscuits), Matcha green hulk( made with the overflowing goodness of vanilla, green apple, kiwi and mint),million dollar shake(loaded with chocolates, strawberry sauce and choclate syrup), and truffle all the way( packing the goodness of the ever delightful chocolate truffle cake, choclates, and coffee)

Promoted
Listen to the latest songs, only on JioSaavn.com
8.Spotlights, Bistro and bar

Tucked away in one corner of the famous BK Dutt Market of Rajouri Garden, Spotlights Bistro and bar is generating quite a stir for its pocket friendly mouth-watering delights. Don't miss out on the Banana walnut and Nutella shake and the oreo cookie and cream shake, if you are in for a creamy shake surprise. We see you slurping already.

CommentsHave we missed out on any of your favourite? Let us know.