A Crodough With Your Tea? London Eats up New Baking Craze 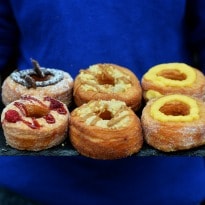 First there was the Cronut, now there's the Dosant and the Crodough. Londoners, it seems, just can't get enough of their doughnut-croissant crossovers.

From hip east London to tea rooms, high-street cafes and sky-rise restaurants, the high-calorie hybrids are flying off the shelves like the proverbial hot cakes.

The craze was dreamed up earlier this year by French chef Dominique Ansel at his bakery in New York, but across the Atlantic it has taken on a life of its own.

Jennifer Rinkoff, the fourth generation of her family working in their bakery in east London, claims to have been the first to import the doughnut-croissant into Britain.

She worked for three days with a 100-year-old family dough recipe to perfect what she calls a Crodough -- the name 'Cronut' already being under US trademark protection.

Made from laminated dough -- flattened and folded into countless layers -- it is deep fried and then filled with a choice of custard, raspberry coulis or toffee apple crumble.

"I saw on Twitter that people were asking where they could get a Cronut in London," she told AFP, as a queue began to form in the small bakery. "So I played with the dough and by the third day it was exactly how I wanted it."

Among those eyeing up the fresh, warm Crodoughs lining the counter was student Abi, 19, who heard about the phenomenon online.

"We decided to hunt them out and they are just so tasty we had to have them. It's like a custard explosion, like donut and croissant together -- what more could you want?" she said.Rinkoff started off baking just a few Crodoughs as a trial, but now sells about 200 a day.

"I wanted to inject a new trend into the business. I think it's maybe more of a craze at the moment but I don't think it's a fad -- I want it to be the next cupcake," she said.
High-rise mash-up

In London's fast moving culinary world, the moreish mash-up has already made its way from back-street bakery to high-rise dining.

At the Duck and Waffle restaurant, located on the 40th floor of the new Heron Tower sky scraper in the City of London, a Dosant has been added to the Sunday brunch menu.

More recognisably a croissant, the Dosant is deep fried, rolled in caster sugar then stuffed with Chantilly lemon custard and sprinkled with chocolate.

For those who can stomach its sickly sweetness, this heart-attack-inducing pastry has the lure of exclusivity.

"There were lots of friends and bloggers and people like that who really wanted to try it but weren't in New York," said executive chef Daniel Doherty.

"We do a limited number, first come first serve. It's through Twitter and Facebook and things like this -- it makes people feel in the know and part of something."

Hybrid treats are also sold at Bea's of Bloomsbury alongside brightly-coloured cupcakes, another US import, made popular by the hit sitcom "Sex in the City".

There is the Townie, a tart-slash-brownie, as well as a Duffin, a muffin-doughnut filled with fresh jam, dipped in butter and coated in sugar.

"There are die-hard Duffin fans who come in for their fix every morning -- and the Townie is more of an afternoon treat," said Courtney King, manager of the Bea's tea-room, near St Paul's Cathedral.

If final confirmation were needed that the hybrid is here to stay in Britain, Starbucks UK has introduced its own Duffin while Greggs, which has 1,600 bakeries across the country, sells a Cronut dubbed.... the Greggsnut.

CommentsAFP photo - Jennifer Rinkoff of the Rinkoff Bakery poses with a tray of "Cronuts", a cross between a croissant and a doughnut, outside the bakery in London.