A Feast of Antipasti, Recipes for the Best Starters in the World 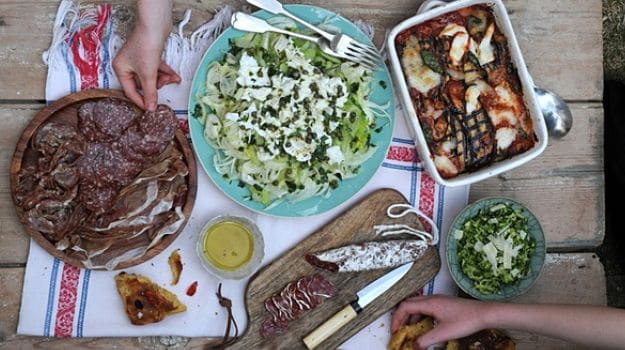 Dangerously good … antipasti, with influences from around the world. Photograph: Jill Mead for the Guardian.

In the last of our four-part series on Italian cooking, we focus on antipasti, second to none among starters, drawing influence from around the globe to pique the palate – just remember to leave room for your mains.

The best feast I ever ate was at an Anglo-Italian wedding in Naples some years ago. The reception was in a 15th-century palazzo, where we walked on to the terrace to find 25 metres of linen-covered tables groaning under the weight of antipasti. Five different kinds of mozzarella, every kind of charcuterie imaginable, salads like rainbows, olives patent-leather shiny and stuffed with almonds, mushrooms fried and pickled, fresh grilled anchovies and too many other delights to list.

We gorged greedily on what we took to be the wedding feast, at which point, a bell summoned us to a seven-course banquet

We English guests descended greedily on what we took to be the wedding feast, and gorged until our eyes were rolling in our heads. At which point, a bell rang to summon us inside for a seven-course banquet. It was only then, retrospectively applying our rusty Italian, that we realised antipasti means "before the meal".

The Italians are dangerously good at starters. Arguably the best in the world. French starters come one after another, in a wearying procession. Spanish tapas are robust and delicious, but lack flights of fancy. Chinese dim sum are endlessly inventive, but too doughy to be eaten regularly.

Only Lebanese mezze can compare to the Italian antipasti in both range and quality. But in the culinary battle between Italy and the Levant, Italy still prevails, thanks to the variety of influences from east, west, north and south that it has assimilated into its cuisine.

In today's recipes alone we have aubergines (originally from India), bread made from American potatoes and southern Italian mozzarella dressed with scented fennel seed from the sun-baked Mediterranean shore.

But beware: if you plan to serve these before a meal, you may want to increase the number of guests. There is enough here for six to feast on or twelve to have as starters.

1 Mix together the flour, semolina and mashed potato in a large bowl, using your fingertips to rub in the potato until it is well distributed.

2 Whisk together the water, yeast and sugar. Pour into the flour and potato mix and bring together to form a soft dough. Knead well for about 10 minutes. Add the salt and knead for a few more minutes. Place in a clean bowl and drizzle with a little olive oil. Cover and leave for an hour or until it has doubled in size.

3 Oil a baking tray well and place the dough into the tray. Using your hands and fingertips, stretch the dough so it almost fills the tray and is about 1-2cm deep.

4 Leave for another 30-40 minutes or until it has doubled in size. Cut the tomatoes in half and place over the surface. Stoned black olives can be added too.

5 Preheat the oven to 200C/400F/gas mark 6. Drizzle the dough with more olive oil and sprinkle with salt and dried oregano.

6 Cook for about 30 minutes, or until the top is golden brown.

1 Slice the aubergines into lengths about ½-1cm thick. Drizzle with olive oil and grill on a preheated griddle pan or in a contact grill until soft. This can be done in batches. Season well and toss in a little vinegar.

2 While the aubergines are grilling, heat the garlic and chilli in a little olive oil. Before they turnbrown, tip in the tomatoes and simmer for about 30 minutes, adding a pinch of sugar. Season.

3 Preheat the oven to 170C/335F/gas mark 3-4. In an ovenproof dish, start layering the components. Start by spreading a little tomato sauce on the base of the dish. Next layer some aubergines. Top with a little sauce and some of each cheese. Rip up a few basil leaves and add to each layer. Repeat the process finishing with cheese and basil.

4 Bake for about 25 minutes or until the top is golden and bubbling.

1 Sprinkle the courgettes with salt and leave them in a colander over a bowl for about an hour.

2 Squeeze out any excess moisture and fluff them up.

3 Place in a large bowl with the rest of the ingredients and mix well.

4 Arrange the salad on a plate with the salami.

1 Scatter the celery and fennel over the serving plate.

2 Squeeze out any excess water from the capers and chop roughly. Mix with the crushed fennel seeds, tarragon, lemon and olive oil. Season and drizzle half over the celery and fennel.

3 Rip the mozzarella into pieces and arrange on the plate. Finish with the rest of the dressing.

Henry Dimbleby is co-founder of the natural fast-food restaurant chain Leon. Twitter: @HenryDimbleby. Jane Baxter is a chef and food writer based in Devon. Twitter: @baxcooka