A Global Guide to Pickles 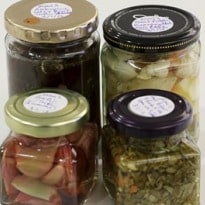 Homemade preserves are a favourite among many cooks around the world. Here are some tasty recipes for kimchi, achar and torshi from Korea, India and Iran

Pickles have a tendency to make our eyes water, and it's not just their sharp taste. For me it's the lemon pickle my grandfather used to make, which brings back memories of family picnics. For Atul Kochhar, chef at London restaurant Benares, it is stuffed chilli pickles that make him go misty eyed. "Our job, as kids, was to help my parents stuff the chillis and put them into sterilised jars," he tells me.

Kochhar says preserves pull on our emotions because of their history of protecting the family's diet through leaner seasons. For the same reason, they are still a mainstay of the home cook. "Homemade pickles taste different because they bring the essence of the person who has made it - who has added the spices they like best. I will always say home cooks are better than chefs at pickles."

The importance of pickles declined when refrigerators became widely available, but there's been a recent resurgence in interest among foodies. But, of course, in some countries pickles have always been central to cooking.

In Korea, kimchi - fermented vegetables - is the national dish and eaten with every meal. A poor-quality batch can be a social embarrassment, according to cookery teacher Kie-Jo Sarsfield. Family recipes are a closely guarded secret, she tells me. But with so many different ingredients it's impossible to create a uniform taste each time, adding surprise and drama to the process. "It's an excuse for conversation because you say: 'Oh come round for lunch, our kimchi is good this time.' But if your husband brought a guest round unexpectedly you would have to apologise if your kimchi is bad." And what happens when you run out? She looks at me, shocked. "You would never run out of kimchi."

One variety of kimchi is enough to create 10 different meals from soups to salad, she tells me. And although it can be made with different vegetables, most Korean families still make a batch of cabbage kimchi before temperatures drop too far. She is scathing about the modern taste for topping burgers with kimchi. Ham or steak work better, she advises.

Korean cabbage is better than the Chinese versions - cut two lengthways (cut the stem and tear the rest) put them in a solution of three cups of salt to 20 cups of water (too much salt and the kimchi will become mushy). Leave this for three hours turning occasionally, until the leaves look slightly wilted.

Rinse under cold water three or four times and drain in a colander until the stuffing is ready.

To make the stuffing peel and trim a Korean radish (if you can't find this try an Indian mooli, which is similar but more watery and less crunchy), slice it into 0.3cm discs and cut it into 5cm strips.

Mix 100g Korean chilli powder, half a cup of salted anchovy sauce (or fish or oyster sauce ), 2tbsp of baby shrimp, one teaspoon of sugar, 3tbsp of crushed or finely chopped garlic, 1.5tbsp of finely chopped ginger in a bowl. Add the mooli and spring onions, and mix well.

Put the salted cabbage into a bowl and pull off a couple of outer leaves, then smear the stuffing in between the layers. Fold over the top of the leaves so you are folding the cabbage in half. Put it in an airtight jar and when the jar is three-quarters full cover with the outer leaves and press them down firmly. Put it in a cool place (such as a garage) for a few days before transferring it to the fridge.

If air gets into the jar, Sarsfield warns, you could end up with "crazy kimchi", which she says "tastes horrible!"

"If you took pickles out of Indian society," Kochhar says, "I don't think it would survive." The country has changed dramatically in recent years, with a growing economy and expanding middle class, but some things stay the same. "I would say 90% of people still live the old lifestyles. In old Delhi, for instance, people still have small houses with flat roofs where they dry their pickles." Vinegar, he says, is seldom used. "We generally rely on sunlight, salt and spices," says Kochhar. But that's the only constant - mango and lime achars are the best-known Indian pickles, almost everything can be made into achar, including meat and seafood. "Meat pickles are very important in places like Rajasthan, which is dry and arid, and where they can't grow many things," says Kochhar.

"They have plenty of sun so whatever little produce they get they can pickle it and use it over the months ahead."

Mustard oil, ginger and garlic, and achari masala or panch phoron - literally five spices (fenugreek, mustard, fennel, cumin and black caraway seeds) - are the basis for many north Indian pickles, along with mango powder and chillis. A south Indian lime achar, however, may just involve lime, crushed chilli and coriander - either salted or matured in the sun.

Like all pickles, achar (Indian pickle) has been developed not just to add extra bite and draw out the flavour of particular dishes, but to ensure ingredients only available in one season can be eaten all year round. For those of us not guaranteed weeks of sunshine to dry ingredients out, luckily there are recipes such as this turnip, cauliflower and carrot pickle for instant gratification.

Wash and peel the vegetables. Cut the carrots and turnips into longish pieces, separate cauliflower into florets. Pat dry on paper towels and leave for few hours to get rid of excess moisture. Heat the mustard oil in a heavy kadhai (wok) till smoking, then let it cool a bit. Fry ginger and garlic until golden, add vinegar, jaggery and the rest of the spices. Add the vegetables and cook for 5mins, toss well, cool and bottle into clean and dry bottles. Your pickle is ready and will last in the fridge for several days.

In an elegant, light-filled house in Bath, Simi Rezai-Ghassemi has prepared a proper Iranian welcome. Spread out on her table, alongside my delicate cup of amber-coloured tea there are glass bowls filled with preserved mulberries, Iranian dates and some Bath fudge. Her mother, Salehe Salehpour-Oskoui, is visiting from her home in Iran's Azerbaijan region, and it is from her that Simi says she has learned to make some of her favourite pickles. The cooking teacher waxes lyrical as she describes the food of the region, from apricots to tomatoes, which gave her her love of cooking. But Iranian pickles - or torshi - are not, she warns me, for the faint hearted. "They are really strong, they slap you around the face."

"With pickles the emphasis is on sour," explains Simi. "And we use herbs to flavour the vinegar and garlic. We eat pickles with most meals - for example it's particularly popular to have cucumbers in brine with koresh (stew)."

In Azeri cooking, unripe grapes are often used to introduce a sour note to food. And at lunch Simi lets me try a bowl of Aash, Iranian soup, with ghooreh (sour grapes pickled in brine), which add a delicious sour pop to the dish.

And I am soon watching in awe as her mother ignores the cutting board to chop the vegetables in the palm of her hand, and later as they show me how to make pretty aubergine pickles, which are perfect for guests, as well as mixed vegetable torshi, and herb torshi - perfect for anything fried.

Although Salehe doesn't follow strict recipes or measure anything, Simi carefully weighs out the correct ingredients - but insists anyone trying to make pickles has to use their own judgment to create their own perfect preserve.

Take some small, tasty aubergines of a similar size that will fit into whichever jar you intend to use (about 120g). And add them to a saucepan containing a hot solution of 70ml vinegar and 70ml water. Put the lid on and simmer for 5-10mins until the aubergines are just soft but not cooked. Cider vinegar will give a less strong taste.

When they are ready, take them out and squeeze them gently to remove the water, slice down the middle and stuff them with a mixture of five chopped garlic cloves, 1tbsp dried mint and ¼tsp salt. Next carefully slide the aubergines into the jar you have picked - which will pack them in tightly. Cover them with 125ml fresh cider vinegar and 1tbsp of water (15ml) (boiled and cooled). Secure the jars and leave them in a cool dark place for a month or more. After opening, slice horizontally into discs and serve. Keep the torshi in the fridge once the jar has been opened. It will keep unopened for at least five months.

Photo: Foodies have been getting into pickles recently, though in many countries preserves have long been a cook's staple. Photograph: Graeme Robertson for the Guardian