A New Chapter for Saffron 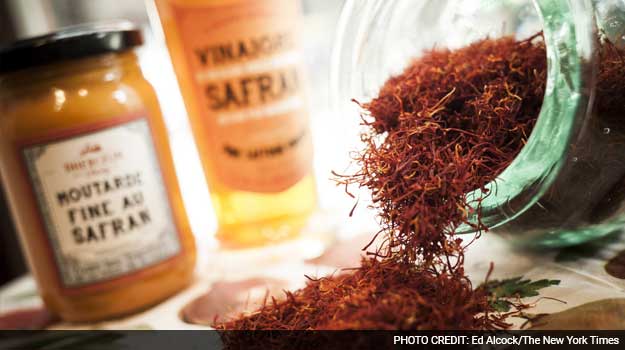 Saffron and saffron-based products at Thiercelin, a spice store, in Paris, Sept. 9, 2015. Amid wild speculation and moves to protect its quality, Saffron is more prized than ever. (Ed Alcock/The New York Times)

Saffron, an ancient medicinal plant and the most expensive of spices, has always had a magical, addictive power. Cleopatra took saffron-infused baths to enhance her allure. Alexander the Great used it to heal the wounds of battle. Many Iranians believe that in its pure form, saffron works as an antioxidant, an antidepressant and a culinary weapon against Alzheimer's, cancer and degeneration of the eyes.

In Iran, which produces more than 80 percent of the 250 tons produced worldwide each year, saffron is omnipresent, in stews, kebabs, rice dishes, sweets. A recent visit to a Tehran supermarket turned up at least a dozen saffron-infused products, including cotton candy, rock sugar to sweeten tea and sohan, a traditional saffron brittle toffee.

It is often said that saffron is worth its weight in gold because it is so difficult and labor-intensive to cultivate and harvest. For several weeks every fall, the crocus sativus flower blooms. At that moment, saffron producers throw themselves into the harvest. They pick the flowers early in the morning, and on the same day gently tease the bright red, three-filament stigma from each flower and dry them. It takes about 150,000 flowers to produce a kilogram (2.2 pounds) of saffron.

Little wonder, then, that the precious powder has spawned a trade rife with the kind of deceptions and distortions typical of traffic in gems or illicit drugs: cheap substitutes, diluted shipments, false labeling. Today, a battle over the future of the "gold of cuisine" is underway, as its world is transformed by speculation and market upheaval.Several scientists and saffron experts have banded together to form a movement they call "Saffronomics." Their mission is threefold: to improve saffron production and marketing; to determine its purity and place of origin; and to impose order on an unregulated market.

At a global conference of Saffronomics in Almagro, Spain, in September, much of the discussion revolved around the huge volume of fake saffron in circulation. "The fraud problem is immense," J.S. Heslop-Harrison, a genetics professor at the University of Leicester, said in an interview. "The use of fakes means people do not realize the special taste and aroma of real saffron."

There is little concern among the experts that adulterated or phony saffron poses a health hazard. Instead, they are driven by a conviction that such an extraordinary product deserves to remain authentic and pure.

At their meeting, they discussed improvements in fraud detection through a variety of tests - from simple spectroscopy to more complex DNA investigations. They want to know whether saffron has been artificially dyed or whether plant compounds such as corn silks or safflower thistle have been added. They are developing sophisticated databases of adulterants and regional varieties.

The turbulence in the saffron market has intensified. The much-anticipated lifting of international financial sanctions against Iran after the nuclear accord last spring has led to brisk saffron speculation inside Iran. (Saffron is several times cheaper here than in Europe, where the retail price can soar to 20,000 euros a kilogram, or about $10,000 a pound).

In the shop Akbar Faramars has run for 20 years in the spice bazaar here in Isfahan, he sells dried fruits, herbs and spices, including wild mint, black violets, sour orange flowers and saffron - in slim 4.608-gram red packets trimmed in gold, for $11 each. "Red Gold of Iran," they say in English.

"Since spring, the price has increased 30 percent," Faramars said. "People who have money are interfering with the market. They have bought a lot and are hoarding it."

In Spain, a major saffron exporter, the market has been disrupted. The country was once a big producer, but has long imported most of its saffron from Iran, then re-exported it as "Spanish." But in late 2014, the European Union began cracking down on the illegal relabeling of all sorts of products, including saffron.

In recent years, Afghanistan has begun producing saffron. In an effort to woo Afghan farmers from opium cultivation, nongovernmental organizations have set up crocus-growing cooperatives there. There is also a mini-revival of saffron production in countries like France, Italy, Spain, Greece, Macedonia, Kosovo and Austria.

For Iranians, there is only one source: Iran. They are convinced that their native "terroir" - that elusive blend of soil, topography, climate and water - is what makes the crocus fields in the Khorasan region in northeastern Iran so special.

In Tehran, Fereshteh Farhi and her brother Farhad have kept alive the ritual of packaging and distributing saffron to friends and family every year. The Sheybani family, on their mother's side, has produced prized saffron on a farm near Birjand in south Khorasan for generations. Every year the Farhis' mother, Effat Sheybani, would receive a kilogram or two of saffron from the farm. She used a scale with tiny weights to measure it, then packaged it in unadorned, sealed plastic bags.

The family has a tradition of cutting the pistils as long as possible to retain the pale yellow stem called dashte. The yellow stem adds perfume to a cooked dish while the red pistils give flavor, the family says. Packaging saffron in long red-yellow strands is a traditional way to prove that it has not been tampered with.

"They tell you, don't ever buy saffron that has yellow because it adds weight and nothing else," said Farideh Farhi, their sister and a scholar of Iran who lives in Hawaii. "But someone I trust told me once that the yellow gives the saffron more scent. I believe that."

There is a divide in the family about the best way to grind saffron. Farideh insists it has to be done as finely as possible with a mortar and pestle. Her sister, Fereshteh, a microbiologist, swears by a small electric coffee grinder.

Grinding is a ritual. A newspaper is laid on the counter to ensure that no saffron is wasted. The strands are put in the electric grinder with a piece of a sugar cube to add friction. The fine powder can be kept in sealed containers for years.

The Farhis have their own rules about handling saffron: Never put it in the freezer. Keep it sealed and out of the light. Do not let it spill - saffron is a powerful dye and hard to remove. And be respectful: Do not use too much, as it is too precious to waste. (Besides, Iranian legend has it that you can die of laughter if you consume too much.)

In Paris, Jean Thiercelin, whose family has been producing, buying, packaging and selling saffron since 1809, shares that feeling of respect. In their shop at the edge of the Marais district, the saffron-based products include vinegar, mustard, syrup and caramels. Thiercelin sells tiny amounts (1 gram) of the finest Iranian saffron in small glass bottles, the three pistils still attached, for 13.90 euros, or about $15.

Listen to the latest songs, only on JioSaavn.com
The saffron is so special that in 2008, three men with automatic rifles burst into the family's plant in Combs-la-Ville hoping to steal the stash. Thiercelin's wife was wounded, but the saffron remained in the safe.

"Saffron is much more expensive than cocaine," Thiercelin said. "So after that, we pretty much stopped talking about it."