All You Need To Know About Bell Peppers 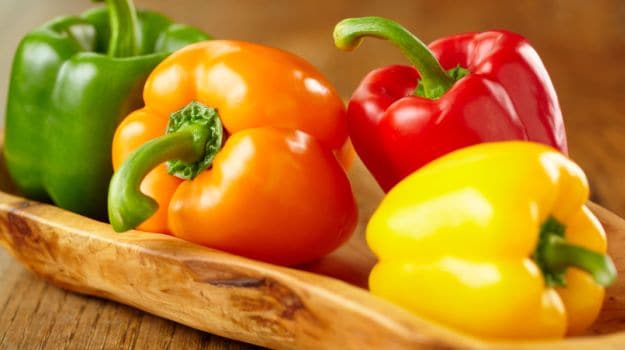 Bell peppers, also known as sweet peppers, are a part of the nightshade family, which includes tomatoes, potatoes and eggplant. These less pungent varieties of pepper are available in different colours such as yellow, red, green, purple and orange. The substance 'capsaicin' that is known to control spiciness in peppers is found in very small amounts in bell peppers, which makes them less 'hot', hence, earned its name as the sweet pepper. But, the appeal of bell peppers goes way beyond their stunning good looks and sweet-spicy taste. Rich in antioxidants and vitamins, sweet peppers are packed with many health-benefiting properties. Here're 4 health benefits of adding bell peppers to your diet:

1. Good For Eyes, Skin And Bones

Bell peppers are rich in vitamin A and C, which support healthy eyesight, especially night vision, as well as bones and skin health. They are a rich source of a carotenoid called lutein that helps in lowering the risk of macular degeneration of the eyes. According to the book, 'Healing Foods', by DK Publishing, "Bell pepper contains vitamin C, necessary for the synthesis of collagen, the main structural protein in the body that maintains the integrity of blood vessels, skin and bones."

(Also Read: Load Up On These 7 Nutrients for Healthier and Stronger Bones)

Bell peppers are rich in vitamin A and C.

It is believed that due to the presence of capsaicin - the substance that boosts our metabolism - bell peppers may enhance weight-loss efforts. Research has shown that capsaicin keeps immature fat cells from developing into full-fledged ones, which supports weight loss. In other words, capsaicin is known to increases our metabolism without increasing the heart rate and blood pressure, unlike its 'hot' cousin - red chillies.

According to the book, 'Healing Foods', "Red peppers have significantly higher nutrient levels than green, including lycopene, which helps to protect against cancer of the prostrate, cervix, bladder and pancreas." Being rich in antioxidant and anti-inflammatory properties, bell pepper may provide several anti-cancer benefits. The risk of cancer increases due to chronic excessive inflammation and chronic unwanted oxidative stress. These factors can be offset with regular intake of phytonutrients having antioxidant and anti-inflammatory properties. As per a study published in the Journal of Food Agriculture and Environment, "Peppers were reported to contain moderate to high levels of neutral phenolics or flavonoids, which are important antioxidant components of a plant-based diet. Flavonoids are reported to possess many biochemical and pharmacological effects, including anti-oxidation, anti-inflammation and anti-allergy. The intake of these flavonoids was reported to reduce the risk of cancer."

Did you know that applying bell pepper on hair can enhance your hair growth and health? They trigger hair growth through the improvement of blood circulation in the scalp. All you have to do is boil a few dry red bell peppers in water and leave them for 4 to 5 minutes. Once it is cool, massage it on your scalp and leave it for 12 to 15 minutes. Wash off the hair with normal water. The spiciness of bell pepper enhances the growth and health of the hair. Repeat it twice in a week for better results.

Bell peppers not just enhance the taste of your food, but can also boost your health. So, add some bell peppers into your shopping basket, and start reaping their rich health benefits!