Almond Flour: Everything You Need To Know About This Nutritious Grain-Free Flour 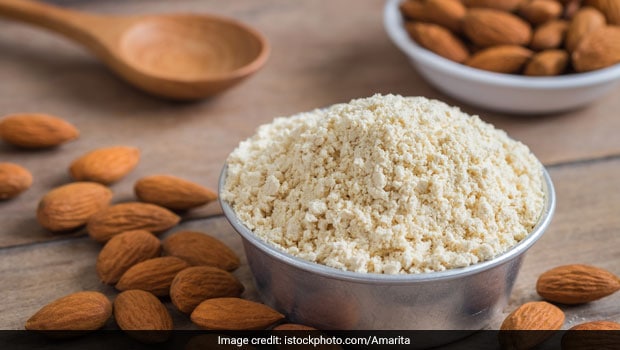 There is a new trend of using grain-free flours, which is gaining traction, as more and more people turn to gluten-free diets. There are a number of gluten-free alternatives to wheat and refined flours, which are being sold in the market and are being increasingly used to replace the conventional grain flours while making everything, from cakes and cookies to savouries. Some of the most well-known gluten-free flours are coconut flour, sunflower seed flour, almond flour, cassava flour, etc. These flours taste and feel different than their traditional counterparts, but these are said to be more nutritious and healthier than the latter. We're having a look at one of the most common grain-free flours available in the market - almond flour. We're looking how nutritious is almond flour and also giving you an easy guide to making it at home.

Almond flour is a little sweeter in taste than the normal flours, but much like regular flours, it can be used in making anything from pancakes to pasta. Almond flour is considered more nutritious than grain flours, even whole wheat flours. It also has the added benefit of fighting inflammation and aiding weight loss. It is made from blanched, skinless almonds, which are ground to produce a powder, which can be used instead of regular flour. Needless to say, almond flour is more expensive than grain flours, due to the price value of the nuts.

Almond flour is usually used in making healthy, gluten-free desserts. Almond flour is used in some diets including paleo diets. It can be either bought in stores or can be prepared at home. Needless to say, almond flour is low in carbohydrates, and hence, can be used in all low-carb diets. The nutrient profile of almond flour is identical to that of almonds, which are anyway known to be one of the best healthy snacks for those looking to lose weight. There's a reason almonds have been associated with brain growth and memory. This is because they are enriched with brain power-boosting nutrients like vitamin E and B6, zinc and protein. Obviously then, almond flour comes with these nutrients too, which makes it a great brain food.

Almond flour is particularly rich in vitamin E, which is a group of fat-soluble compounds, which act as antioxidants and may reduce risks of heart diseases. Some studies have also linked the vitamin with lowered risks of Alzheimer's. Another incredible health benefit of consuming almond flour is the presence of the mineral magnesium in it. Magnesium is important for a lot of important body processes, including regulation of blood sugar levels, reducing insulin resistance and lowering blood pressure.

Also Read: Why Diabetics Should Munch on Almonds for the Sake of Their Heart

Almond Flour is particularly rich in vitamin E, which acts as antioxidant

How To Make Almond Flour

Making your own almond flour at home is pretty easy and so is using it in baking and cooking. To begin with, make sure the almonds you use for making the flour are high in quality. Slice the almonds and then simply toss them in a food processor or blender. Blend the sliced almonds until the texture of the flour is to your liking. Make sure that you pulse the blender, or blend the almonds in a consecutive switch on switch off fashion in the food processor. This is done to prevent the almonds from getting too oily from the heat of the continuous blending. You can store almond flour in a cool and dark place in a well-sealed container. As long as the container is kept away from heat and light, the homemade almond flour should be good for use, for up to a year.

Baking and cooking with almond flour may take some time to get used to in the beginning, but it's as easy as cooking with regular flour. Almond flour recipes may have a few extra steps and slight modifications, but they mostly resemble the regular recipes involving refined or whole wheat flour. So, now that you know how to make it, it's time to go ahead and try this nutritious grain-free flour as a substitute for regular high-carb flours.