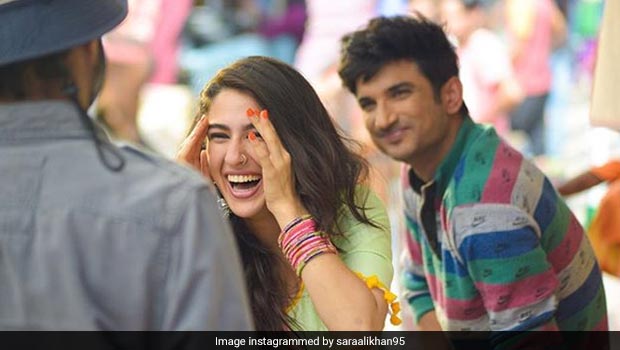 The reviews of 'Kedarnath' are in, and it looks like Sara Ali Khan is shining bright in her debut film opposite Sushant Singh Rajput. The actor is receiving a lot of praise for showcasing her amazing acting chops in the movie that is set against the backdrop of the Uttarakhand floods. 2018 is turning out to be a great year for Sara Ali Khan as the young actor basks in the glory of 'Kedarnath' and prepares for the release of her second film 'Simmba', where she will be seen opposite Ranveer Singh. 'Simmba' promises to be a superhit as is evident from the reaction that the launch of the movie trailer got last week. Sara has been busy with the promotions and trailer launches of the two films since the past few weeks, but she made sure she took a small break and went vacationing in London. The 25-year-old is now back to the grind and is spilling her sass in multiple television appearances and interviews.

Sara Ali Khan sat down for a tete-a-tete with Rohit Khilnani in an interview for NDTV Hop, where she talked about multiple things, including her love for junk foods. When asked what she would like to binge on to celebrate the release of 'Kedarnath', she got really excited and responded with glee, "I would like to have a cheese burst margherita pizza! And I would have a lot of chocolate." She quickly added by saying: "Dark chocolate, because now I've grown to just like that. But like lots (of chocolate)! With sea salt maybe." As Khilnani started to move on, Sara Ali Khan interrupted him to add: "I'll also have mango milkshake!" Seeing her enthusiasm on the topic amused Khilnani who couldn't help but laugh at Sara Ali Khan's delightful and adorable answer.

Take a look at how excited Sara Ali Khan got when talking about food:

Try not to grin at Sara Ali Khan's childish glee while watching this video. We're sure you failed! Khan's love for food is no secret.The actor regularly posts pictures of her delicious meals on her Instagram stories. During her debut in the ongoing season of 'Koffee With Karan', Sara Ali Khan had revealed that she was overweight because she was suffering from PCOD. Her father Saif Ali Khan had responded to this by suggesting jokingly, that Sara's weight issues may have been because of her love for pizzas. Well Sara, we sure can relate to your affection for pizza and wholeheartedly support your enthusiasm for a post-release binge session!

The full 18-minute interview of Sara Ali Khan is available on the NDTV Hop mobile app.