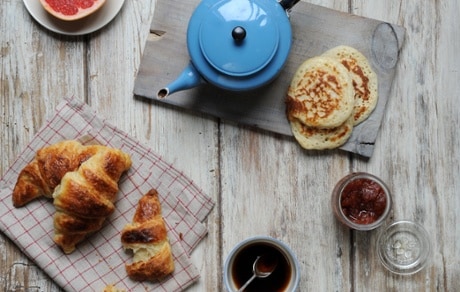 What better way to start the weekend than by whipping up some fresh and tasty croissants or pikelets? There might even be some left when everyone else wakes up - if they're lucky.

Baking in the morning can be disorienting. While everyone sane is still asleep, you might be blearily squinting at the oven dial and pressing pastry into moulds with heavy fingers. You nap on your feet, only to be jolted awake by the oven timer. You're soaring into the first sugar rush of the day before the clock's struck noon. But there's a charm to it, too. It's a quiet time and even a magical one: drowsily sipping coffee in the glow of the oven while the morning frost bites outside. And when your greedy hands are grabbing at the freshly baked results, all that tiredness just melts away.

Pikelets are a kind of flat crumpet. Unlike crumpets, though, which call for fussy moulding rings to help them to hold their shape as they cook, these call for little more than a mixing bowl, a spoon and a frying pan. They're blissfully easy to make and have quickly become a staple food in our house. After you've enjoyed a few hot from the griddle - holey, chewy, dripping with salted butter - I'm sure they'll find a way on to your breakfast tables.

1 and a half tsp instant dried yeast

1 Combine the milk with the boiling water then leave to cool until the mixture's just tepid. In a large bowl, mix the flour, yeast, sugar and salt. Once the liquid is lukewarm, add it to the dry ingredients and beat vigorously for a minute or so. Leave the batter to sit in its bowl at room temperature for an hour, or until it has risen to at least 1 and a half times its original volume, and is filled with thousands of tiny bubbles.

2 Once risen, the batter should be aerated, slightly thicker and more glutinous - give it a gentle stir before continuing. Heat a large frying pan over a medium heat until it's hot. Grease with a couple of drops of oil and turn the heat down slightly.

3 Spoon 1 heaped tbsp or so of the batter into the pan - enough to create a thick pancake 7-10cm wide. Let this first pikelet be the sacrificial test one. Cook for 1 and a half to 2 minutes on one side: it should immediately begin to set, bubbles growing, bursting and pockmarking its surface until it has a holey, crumpet-like texture. (If the batter's too thick, the bubbles won't be able to break through. Just stir in an extra tbsp milk if so.) Once the upper surface sets, flip the pikelet and cook for a further 1 and half to 2 minutes on the other side. Adjust the heat as you deem fit, regrease the pan and cook the remaining pikelets - you should be able to fit a 3-4 in the pan each time.

4 Serve while they're still warm with salted butter and a soft-set jam.

Here's a recipe for those who like a challenge. Although this is quicker and easier than a normal croissant recipe (here you add the butter in chunks rather than in a single slab), it's certainly not a fast bake in the scheme of things. You'll need to start work the day before you plan to eat the croissants and it's a hands-on process, too, with repeated periods of rolling, folding and chilling the dough. But the results - light, flaky, buttery - are sublime.

You can bake these in the evening, to reheat for breakfast, or leave the shaped croissants to prove overnight before baking fresh in the morning.

1 and a half tsp salt

1 egg beaten with a little salt, to glaze

1 Combine the flours in a large bowl then rub in the butter using your fingertips. Add the yeast, salt and sugar. Combine the water and milk in a small pan and heat until the liquid is just about tepid - it's important not to overheat this mixture: the aim is just to take the chill off the milk. Add the liquid to the dry ingredients and work to a shaggy dough using your hands. Don't knead the dough, though, as this will make it tough to roll out later. Add the chilled, cubed butter (it's crucial that it's cold at this stage, otherwise it'll melt into the dough) and gently distribute through the dough. Cover the bowl with clingfilm and leave the dough to rest at room temperature for 30-45 minutes. This resting period will give the yeast a chance to get working.

2 Prise the butter-studded dough from its bowl and roll out on a lightly floured work surface to a rectangle of dough at least twice as long as it is wide, and no thicker than 1cm. Fold the top third of the dough down and the bottom third up, as if folding a letter. Now rotate the dough parcel by 90 degrees (so that what was widthways is now lengthways). Roll, fold and rotate the dough again. You've just given the dough two "turns". Wrap the dough in clingfilm and put in the fridge for 45 minutes, to chill the butter and rest the gluten in the dough.

3 After 45 minutes, give the dough another two turns, remembering to rotate the dough by 90 degrees between each one. You'll probably find that the dough becomes harder to roll as you continue and the fat chunks of butter gradually change to layered flakes then faint streaks. If at any point the butter starts to melt or soften, give the dough a little longer in the fridge before continuing. After the fourth turn, rewrap the dough in clingfilm and return it to the fridge for an hour.

4 The dough is now ready to be rolled and shaped. On a lightly floured surface, roll out the chilled dough to a rectangle roughly 65cm long and 20cm wide. It'll be tricky to roll the dough this thinly, so you'll need to persevere, but just gently roll and re-roll it until the dough's the right size.

5 Cut the dough into triangles 10-12cm at their base and 20cm tall. It's worth using a ruler or tape measure at this point to get even shapes. The triangles should tessellate - imagine six of them lined up with their bases along the bottom edge of the dough, with six more upside-down in the gaps between them. Cut these triangles out.

6 To shape each croissant, stretch the triangle by its bottom two corners, slightly elongating its 10cm base so that it flares out towards the bottom. Now roll the triangle tightly up from base to tip, stretching the tip up slightly as you do so. Leave to prove on a large baking tray lined with baking parchment. Cover the croissants loosely with clingfilm as they rise -usually around 1 and a half to 2 hours Preheat the oven to 220C/425F/gas mark 7fan 200 Degree C/gas mark 7.

7 How long these take to rise will depending on the temperature of your kitchen. They're ready when they've doubled in size and feel marshmallow soft. Alternatively, leave to rise at room temperature for 45-60 minutes - until they're just beginning to puff up - then place in the fridge overnight. By the morning they should be at least 1 and a half times their original size. Let them finish rising for an hour or so, then bake as below. Whatever method you use, just make sure you're patient and give the croissants time to double in size.

8 Preheat the oven to 220C/425F/gas mark 7. Brush the risen croissants with the egg wash then bake in the preheated oven for 20-25 minutes.