Before Soylent: a brief history of food replacements 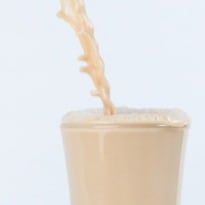 As Soylent readies to make its first official delivery next month, we take a look at other attempts to reimagine what we eat

"What if you never had to worry about food again?" asks the website for much-buzzed about food substitute Soylent. For a slew of reasons, from environmentalism to personal health and "having more freedom with [your] time and money", the company wants to replace our traditional meals - ie ones made of food - with a "default meal" that's "cheap, healthy, convenient and ubiquitous." Their vision for the future of food? A drinkable, beige macronutrient goop.

But the crowdfunding-backed anti-food startup is not the first to ask whether we're doing this eating thing all wrong. As Soylent gets ready to make its first official delivery to 20,000+ curious customers this month, we take a look at other notable attempts to replace, redesign, or radically reimagine what we eat.

Anyone who's seen the Jetsons knows the drill: just pop one pill and all the satisfaction of a hearty meal can be yours without the hassle of eating! But the idea that we would one day get our sustenance in capsule-form was popularized in mainstream American culture long before it was co-opted by science fiction. As Matt Novak writes for BBC's Paleofuturist blog:

In the 1920s and 30s the meal pill showed up in popular media as something inevitable, with a touch of the scary. Satire often tried to soften the blow.

In 1926 a newspaper in Utah ran a series of cartoons poking fun at the idea. In one, a construction worker on a ledge digs through his pockets to realise that he has left his meal pill at home; a grocer plonks six turkey dinner meal pills on to the counter for a lady buying thanksgiving supplies; the ladies of the house reflect on the 'antique' dirty dishes, a relic thanks to the meal pill.

Of course, the meal-in-a-pill remains little more than a caricature of "the future" to this day. Packing all our caloric and nutritional needs into a tiny capsule turns out to be exceedingly difficult - by some estimates, you'd be swallowing more than half a pound of pills per day to replace breakfast, lunch and dinner.

Tang and other powdered foods of the Space Age

Remember Tang, the astronauts' drink of choice? During the 1960s, the instant OJ-substitute was touted as an integral part of a modern breakfast: it was convenient, money saving and chock-full of vitamins. ("More Vitamin C than orange juice" with "no squeezing or unfreezing," according to an early advertisement.) But while Tang was the most emblematic brand, streamlining food into powdered form was a wider Space Age trend: non-dairy creamer got added to coffee, mashed potatoes came from a box, and eventually a whole, instant breakfast fit in a glass. While such products weren't meant as total food replacements, they were replacements for specific foods meant to save us time and money - and even help our health.

Mostly sugar. The drink mix contains "less than 2% of Orange Juice Solids," as well as several types of yellow dyes, maltodextrin (an inexpensive thickening agent which is made from rice, corn, or potato starch, according to FitSugar), artificial sweeteners, and some other stuff you probably can't pronounce.

What happened to it?

Through the 1990s, the powdered, usually orange-flavored drink mix passed as a reasonable - and fun! - alternative to juice. But it turns out that "naturally and artificially flavored" sugar-powder that simulates orange juice isn't as good for you as juice from a real orange. Go figure.

You can still buy Tang in many supermarkets across the US, but sales have plummeted since its heyday as a staple of the American breakfast table. Tang has found a new fanbase in emerging markets like Mexico and the Philippines, however - and parent company Kraft Foods released a new flavor just last week: orange-pineapple.

You can find "liquid nutrition supplements" like Ensure or Boost on grocery store and pharmacy shelves across the country. These "shakes" come in various flavors and can be can be consumed in addition to a regular diet, as replacement for one or two meals a day, or in lieu of food altogether. They were developed mostly for use with medical supervision by the elderly, patients recovering from illness, and others who need help putting on or retaining weight, but have recently been marketed for use by healthy adults. "Cool, creamy Ensure is great for an occasional breakfast or lunch, or a delicious between-meal snack," the website tells us - though such health claims have been challenged.

Ensure Complete is water mixed with sugar (about five sugar cubes-worth per bottle), maltodexterin, "milk protein concentrate," "soy protein isolate," and many other ingredients, including vitamins, minerals, sweeteners and food dyes. You can see the full nutrition label here.

In a most grim example, Ensure has been used via nasal intubation to force-feed hunger-striking prisoners at Guantánamo Bay, but that's far from a normal use case. Ensure, Boost and similar products are available at local pharmacies and grocery stores for anyone who cares to try them, but consulting a physician before making any major dietary changes is recommended.

Soylent makes some bold claims about life efficiency on its website. Drinking powdered macronutrient mix instead of eating food saves you "the time and money spent shopping, cooking and cleaning, puts you in excellent health and vastly reduces your environmental impact by eliminating much of the waste and harm coming from agriculture, livestock, and food-related trash," according to the company. That health claim has been generally rebuked by nutritionists and doctors, who note that a "balanced diet" means more than just a list of nutrients and vitamins - but, let's not dwell on that too much here, others havecovered it. Though Soylent is yet to ship its first batch to an eagerly awaiting public, the support they have received so far shows there is a larger market for food alternatives than some of us may have thought.

What's in its future?

Soylent raised more than $1m via Crowdhoster and got an additional $1.5m in venture capital from Silicon Valley backers. In all, the company says it has sold over $2m worth of their meal-replacement mix ahead of the first shipment, which is scheduled to go out at the end of this month. We'll have to wait and see how many people can sustain the no-food diet, but preliminary reviews are not soencouraging.