Butter Chicken And Naan Are Being Served As 'Indian Taco' In NY, And People Aren't Pleased! 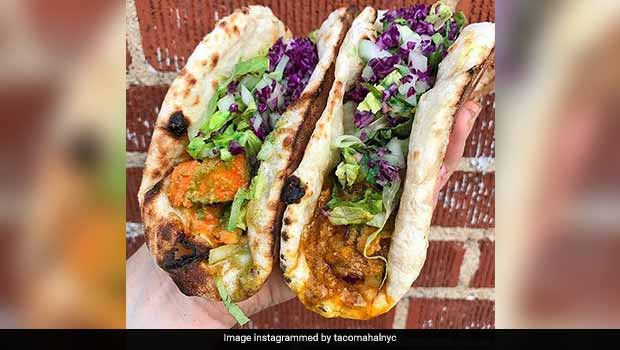 Highlights
We Indians take a lot of pride in our culture and traditions, that are both immensely colorful and varied. Food is a big part of our cultural fabric and the same pride extends to the our culinary wealth too. So while globalized and fusion foods are gaining traction big time in the subcontinent, the regional dishes remain as popular as ever and people are rather puritan when it comes to experimentation involving these dishes.

Butter chicken with naan is one such dish and when one New York restaurant tried to play around with it, Indians were quick to register their discontent about it. Taco Mahal in NYC, recently started selling something called the Indian Tacos. The dish aims at bringing a slight twist to the butter chicken and naan. The dish is basically a typical naan bread stuffed with chicken curry and topped with cabbage, lettuce and onions, folded in the manner of a taco.

The restaurant has become quite popular with lovers of Indian food in New York, because who doesn't love butter chicken? The dish has been receiving favorable reviews from some foodies, but Indians, for the most part, are not thrilled about the Mexican twist to one of our most popular dishes. The dish has been featured on online food blogs and websites and has attracted a lot of negative feedback from the Indian viewers on Facebook and other social media portals.

'Lol that's just Indian food in a naan', wrote one Facebook user. 'You guys folded Naan and called it a taco', wrote another. 'Please just order Indian food from an actual Indian restaurant (no shortage in NYC)', said yet another user. Some others also questioned the restaurant's choice of calling the naan 'Indian', arguing that the bread has roots in Persia and is also widely enjoyed in the middle east and Pakistan, along with chicken and mutton curries.

Well whatever it might be called, the dish still has butter chicken in it and we say, why not stop bickering about what it's name and maybe, just dig in? What's in a name after all!