Can We Ever End the Tyranny of the Easter Ham? 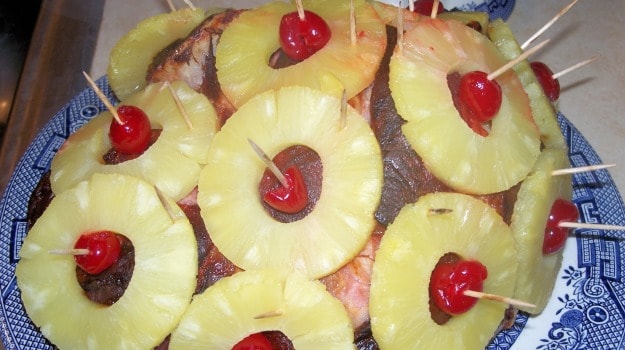 The traditional dish continues to inspire horror when it emerges from the kitchen, studded with cloves and pineapple. But it doesn’t have to

The Easter Ham parked on your holiday buffet – big and fleshy, fat scored, glistening, sticky-sweet and speared with rings of pineapple – may seem lowbrow to you, but it’s a dish with pedigree. Martha Washington made a version of it at Mount Vernon for George. In the midst of World War II, Wallis Simpson published a recipe for it in her cookbook, Some Favorite Southern Recipes of the Duchess of Windsor. And there are those who posit that the origins of the ordinary-seeming glazed, pineapple-y ham are rather exotic: the recipe, they say, is a riff on a feast dish from pre-Christian Fiji supposedly prepared by Fijian cannibals: young, tenderized girls garnished with pineapple and roasted in kava leaves.

Food historiography aside, there are untold thousands (if not millions) of Easter celebrants for whom the traditional Easter ham has and continues to inspire horror when it emerges from the kitchen, studded with cloves and pineapple. People like Robert X (not his real last name), who, as a child in Toronto, loathed the dish with such ferocity that he and his sisters spent the weeks before Easter begging their mother not to make it. “Every year we told her that thing tasted terrible. We said it was a huge mistake,” Robert said sadly. “But she never changed.”

However, Mrs X was not the only one in history to endlessly serve the same holiday dish no matter how gross it tastes, ignoring the pleas of blood relatives and life partners. Food – especially feast food – and its relationship to our deep-rooted conception of ourselves, our families and our cultural identity (to name just a few) has been a subject of our greatest writers since long before Petronius. And for many Christians (believer and atheist alike), Easter is a high holiday, second only to Christmas in its quality of being steeped in remembrance of things past. For the Mrs Xs of the world making That Ham, whether it tastes like over-salted shoes or not, is a way of communicating with their ancestors. A primal nostalgia is satisfied when we cook what our grandparents and their grandparents cooked – when we recreate those long-ago, longed-for, distantly-remembered feasts of our childhood.

Yet, since eating can be one of life’s very greatest pleasures, we must, as George Orwell would encourage us, be brave and face unpleasant facts: does it have to be this way every year? With the repulsive ham? Really? And the answer is: if you want to spend the holiday with a family which has been serving That Ham for Easter for as long as recorded memory, then, yes it has to be a ham. But, maybe it doesn’t have to be a disgusting one. Maybe.

You could be lucky in your taste buds, like Sarah Burnes, a New York literary agent who grew up in Boston celebrating Easter at her grandparents’. They served That Ham – the traditional fat scored, clove studded, pineapple-festooned thing – but Burnes and her siblings loved it. “It was yummy!” she explained. Decades later, she celebrates Easter at her parents’, who still serve the traditional ham, and “everyone in the whole family” including Burnes’ young children “love it, too.” Suspicious, I queried whether her grandparents had been foodies. Burnes laughed. “They got their hams at the A&P.”

But it’s easier today than it almost ever was to make a decent ham. In our nose-to-tail, farm-to-table, organic, locavore farmers’ market food culture, the common home cook with some extra cash to spare in the Anglo-Saxon world has access to ingredients that the greatfoodiesofyore needed to decamp to France and Italy to obtain. If you are hosting Easter and wedded to the traditional offering, it would not be too hard or cost too much to find a good ham (the kind that isn’t pre-sliced and doesn’t need to be soaked overnight), and to read up on what some goodcooks have to say on the subject. You might even contemplate ditching the pineapple and/or maraschino cherries this year.

However, if it is your lot to be a guest at someone else’s Easter celebration, there’s probably no escape from the Tyranny of the Ham. To Mr X (and countless Mr and Mrs Xs throughout the generations), Easter is all about That Ham, so you might as well embrace it. It can be hard to remember – now that we live on Planet Foodie – but sometimes food doesn’t have to taste great to nourish us in all kinds of ways. Bring a bottle of wine and flowers. Savor the feast to welcome spring. It’s been a long winter.