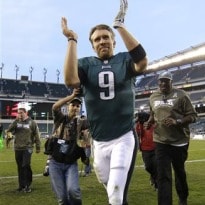 Two cities where the signature food item is essentially a great big pile of meat topped PETA's list of most vegetarian-friendly stadiums.

For the fourth straight year, the Eagles' Lincoln Financial Field -- in the city that invented the cheesesteak -- topped the rankings by People for the Ethical Treatment of Animals. Kansas City's Arrowhead Stadium was second.

The organization cited the Linc's vegetarian hoagie, a faux-steak sandwich and veggie dogs among the "exceptional" options.

At Arrowhead, in one of the country's top barbecue cities, the stadium menu features veggie dogs, veggie burgers and a spicy vegan "Sloppy Jane." Naturally, they come with barbecue sauce.