Here's one thing a lot of restaurant chefs have in common with a lot of kids: they love good, crispy, crunchy chicken tenderloins, a.k.a. chicken fingers. 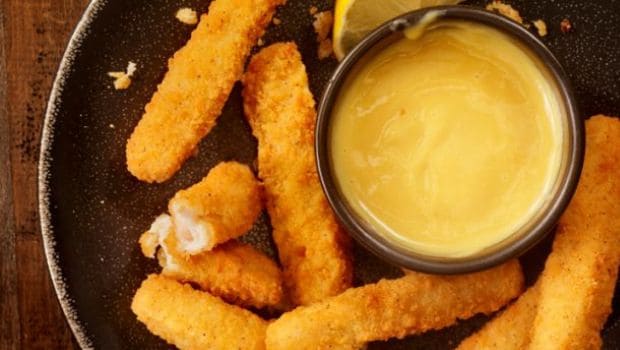 Highlights
Here's one thing a lot of restaurant chefs have in common with a lot of kids, and we're not talking about the wunderkinder who compete on junior cooking shows: They love good, crispy, crunchy chicken tenderloins, a.k.a. chicken fingers.

"They are the easiest thing to cook and eat when you're busy back there," says Ed Scarpone, executive chef at DBGB in CityCenterDC. "Everything's always around to bread and fry them, plus a cheap sauce can be found, or hidden, in the walk-in. We do them every other week, at least."

Scarpone says he knows "for a fact" that his pals who cook in high-end restaurants often bring in chicken tenderloins or order a case of them that will never make it out of the kitchen, starring in staff meals instead. He prefers a spicy coating, and he whetted our appetite with talk of cacio e pepe chicken fingers with a Parm sauce.

The accompanying recipe is particularly kind to those of us who don't have 375-degree oil at the ready. It starts with butter-toasted panko bread crumbs, done on the stove top; that way, the coating becomes nicely golden brown and delicious - in restaurant parlance, GBD - in the chicken's short time in the oven. You can assemble the fresh salsa before the chicken is done.

And because we're thinking chicken fingers go over well with a lot of "grown-up kids" as well (read Eater executive editor Helen Rosner's award-winning ode, published last year in Guernica), an early evening just before Date Night could go like this: Make this recipe for hungry children and babysitter - but not before stashing away a few of the tenders for yourself. Upon returning home, kiss sleeping children's foreheads and then head to the kitchen for your late-night snack.Oven-Baked Chicken Tenders With Pineapple-Apricot Salsa

It's good to have an instant-read thermometer on hand to gauge the doneness of the chicken - or you can just cut into one piece to tell whether it's cooked through.

For the chicken: Preheat the oven to 425 degrees. Place an ovenproof wire rack inside a rimmed baking sheet.

Melt the butter in a large skillet over medium-low heat. Stir in the panko and cook for 5 to 8 minutes, stirring often, until golden brown. Remove from the heat; season (still in the pan) lightly with salt and pepper and let cool.

Whisk together the egg and milk in a wide, shallow bowl until well blended. Place the flour in a separate, similar bowl.

Use paper towels to pat the chicken dry. Cut each thin piece lengthwise into 1-inch-wide strips.

Meanwhile, make the salsa, combining the ingredients in a mixing bowl as you work: Dice the pineapple and finely chop the red onion. Seed the jalapeño pepper half, then mince it.

Cut the radishes, if using, into small dice. Coarsely chop the cilantro leaves and some tender stems.

Cut the lime in half, and squeeze in 2 tablespoons of juice. Add the preserves, then season lightly with salt and pepper, stirring to incorporate.

Listen to the latest songs, only on JioSaavn.com
Serve the chicken warm, with the salsa.