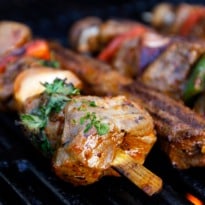 Double up the fun of this Indian Premier League (IPL) season with a string of pubs and restaurants across the country offering tempting deals on delectable food items, funky mocktails and cocktails - all topped with the advantage of watching the cricket extravaganza on big projector screens.

Be it in Delhi, Kolkata, Bangalore, Mumbai or Chennai, the IPL matches, which kickstarts at Kolkata's Eden Gardens Wednesday, is set to grip the young and old alike till May 26.

Cashing in on the craze will be lounge bars, pubs and eateries with some even offering free drinks or shots on every sixer or a wicket - and a whole lot of them adding special decorations to create a suitable environment for cricket lovers.

Zebaa, a newly-opened lounge in the capital's Greater Kailash 2 area, has introduced snack-and-drink packages. It has five different packages - Bouncer, Googly, Stumped, Hat-trick and Power Play, and its ambience has also been modified.

"We have made a nine-foot long bat with the entire IPL schedule on it. Three projectors have been installed in the lounge with loudspeakers, which can help people listen to the commentary," Vinay P. Singh, general manager (Operations), Zebaa, told IANS.

One of its packages has vegetarian and non-vegetarian finger food with a herbal sheesha, six Indian Made Foreign Liquor (IMFL) or six pints of beer in just around Rs.1,500, while another offers cricket fans a one-plus-one treat on IMFL and a 20 percent discount on all food and herbal sheesha.The Stumped package costs a mere Rs.1,100 for a bucket of eight beers.

The lounge is also decorated with the flags of the nine participating IPL teams and a faux cricket pitch made to give the feel of a cricket ground.

Bangalore-based pub Over The Top Terrace Lounge and Enigma have one-plus-one offers running during weekdays and weekends too. Both places have huge LCD screens for the convenience of fans.

"We are expecting the lounge to be jam-packed especially during the semifinals," Vineet Raj told IANS.

In Chennai, places like Radha Regent, Benzz Park and Keys Cafe are offering packages encompassing unlimited drinks and food discounts, while Kolkata, where the first match between Kolkata Knight Riders and Delhi Daredevils will be be held, projector screens and extra LCD screens will be up in several food joints for guests to savour the cricket matches.

Caught n Bowled, The Big Ben, The Tea Trove are some of the places that have their plans set for IPL 6 viewers in Kolkata.

Uber, a lounge in the national capital, is especially cheering for the team Delhi Daredevils and has come up with IPL special drinks and dishes, a few of which are: Viru's mixer, Tangy Warner, Pathan swinger, Exotica Devil's platter, Daredevil alla pizza.

Life Caffe, another lounge in the heart of the capital Connaught Place, is also celebrating the sixth edition of IPL with an exotic menu.

Listen to the latest songs, only on JioSaavn.com
Each dish has been named to represent a team - Daredevil Chicken Wings (Delhi Daredevils), Royal Mutton Boti (Rajasthan Royals), Kolkata Kasundi Potatoes (Kolkata Knight Riders), and Nuts about Bangalore (Royal Challengers Bangalore) are some examples.

There is also Hinglish - The Colonial Cafe, located in Pacific Mall, which has incorporated the surround sound technology, which will help its patrons experience the action of the thrilling game live.