Do children really get sugar rushes? 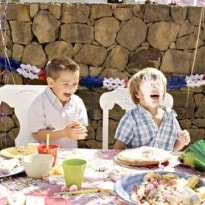 People often get cross when you tell them there's no such thing as a sugar rush. Especially parents. They have witnessed, time and again, their offspring going ape at parties, after mainlining jelly and ice cream. "Sugar high," sigh the grown ups, resigned to the inevitable crash. This observation has been passed down through generations, like DNA.

I must admit I was taken aback when a fellow parent hit me with the news that there is no scientific basis for the belief that sweeties make kids hyper. (It's old news, by the way, which makes it even odder that so many of us still haven't got the memo.) It's such a deeply entrenched assumption, although I had in the past questioned whether I was too quick to blame sugar for my son's ill behaviour (or my failure to control a three-year-old).

Sugar, the food additive, has never seemed more evil. We are addicted to the stuff and it has fully replaced fat as the widely accepted bete noir behind obesity. But one thing that it doesn't do is fuel sudden bursts of hyperactivity. Scientists started looking into this in earnest in the 1970s after an American allergist, Benjamin Feingold, advocated the removal of food additives to treat hyperactivity in children. In 1995, a meta analysis of the 23 most reliable studies (using known sugar quantities, and placebos, and with the children, their parents and the researchers blind to the conditions) was published in the Journal of the American Medical Association. Sugar simply had no discernable effect on the children's behaviour in these studies.

Tricks of the mind

How can millions of parents have got it so wrong? Easily: expectation causes cognitive biases, which cloud judgment. Back in 1994, a study in the Journal for Abnormal Child Psychology assembled a group of 35 boys, aged between five and seven, whose mothers said they were behaviourally sensitive to sugar. Some of the children's mothers were told their sons had been given a large dose of sugar, and the rest were told their boys were in the placebo group. In fact, all children had been given placebos.

The mothers were filmed interacting with their sons and, says the study, "mothers in the sugar expectancy condition rated their children as significantly more hyperactive." Behavioural observations, it continues, "also revealed these mothers exercised more control by maintaining physical closeness, as well as showing trends to criticise, look at, and talk to their sons more."

The other consideration is that sweets and cake are often bestowed on special occasions, when children are already excited, egg each other on and even ham up their general clowning about to satisfy parental expectation.

An indignant friend, who refused to believe any of the above, pointed out that grownups need a sugary pick me up in the afternoon. "It's giving us an energy boost, right?" Well, not according to Luc Tappy, a sugar expert at the University of Lausanne. "What would be the effect on brain energy?" he asks. "I would say not much." Blood glucose is well regulated, you see, to ensure the brain has enough of the stuff, come what may. "You will have almost the same amount of glucose transporting around your brain when your blood sugar is relatively low or quite high," he adds. The only time you'll ever consciously feel a difference in brain energy is if you correct (with sugar) hypoglycemic symptoms such as difficulty in concentrating, incoherent thoughts and anxiety.

OK, so I'm a healthy person who, after lunch, did a few hours of hard brain work at my computer. By tea time, I'm weary and want sugar. Do I have a brain energy deficit that needs treating with sugar? "Feeling tired," says Tappy, "doesn't mean that your brain lacks sugar or energy, but taking a break and eating something maybe allows you to take a rest and give you a psychological boost."

The myth of the sugar low?

We've all been warned about the sugar low, which customarily follows the sugar rush. If you ingest a lot of sugar in one hit, insulin production will be over stimulated (to regulate your blood sugar levels). Some 90 to 120 minutes after you ingested the sugar, all that insulin can bring on hypoglycemia. "This reaction is observed after the ingestion of concentrated beverages" of around 25-50g of sugar, says Tappy, and is easy to produce in the lab. However, it's hard to assess how often it actually occurs in real life. Firstly, people can complain that they feel shaky, weak and have palpitations, and suspect they have low blood sugar, but these are common symptoms and could have other causes such as low blood pressure, or anxiety. Secondly, says Tappy, most of the time you don't take in concentrated sugar on an empty stomach - you will usually have eaten other foods, too, which will slow down gastric emptying.

So it's not that a sugar low is impossible, but these things are never as cut and dried as they are often presented. I am not here to defend the sweet stuff - many of its crimes are indisputable. But why does the sugar rush thesis remains so prevalent? No smoke without fire?