Domino's Has a Robot Delivering Pizzas in Australia! 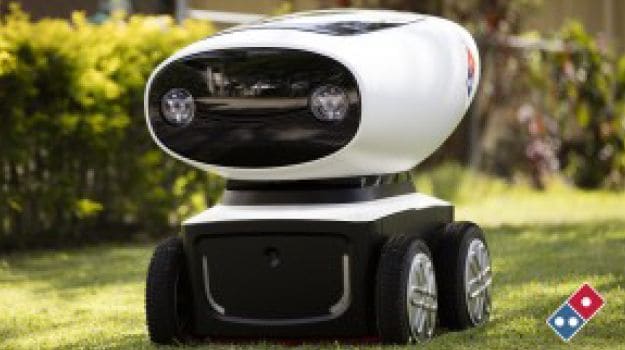 Domino's Australia has developed a prototype model for a self-driving robot that can deliver hot food and cold drinks right to your door. Credit: Domino's

Domino's latest "deliveryman" stands 3 feet tall and doesn't need to be tipped. It has ferried pizzas in Brisbane at a top speed of 12 mph, and the company's Australian master franchise said it's excited for what could come next.

"We have a relentless passion to push the boundaries of what's possible with pizza delivery," said Michael Gillespie, chief digital officer for Domino's in Australia. "As we get further, it's not hard to believe that we might have a store with a couple of [robots] that are doing deliveries."

Domino's has started using a robotic cart named DRU, which stands for Domino's Robotic Unit, to deliver its offerings. So far Domino's has only one DRU. The prototype was developed with an Australian start-up, Marathon Robotics.

The DRU (pronounced Drew) drives on bike paths and sidewalks to find the most efficient, fastest route. Gillespie pointed to its ability to circumvent heavy traffic as a key advantage over vehicles. DRU is not being used on roadways, and legal approval is a hurdle.

"We need to work with government to change regulations," Gillespie said. "Working with them is hopefully going to push new frontiers and new boundaries that people would've thought were possible for many years to come."The Australian master franchisee for Domino's, which has stores in six other countries, has already discussed its robotic deliveryman with the New Zealand government.

Gillespie said he was excited with results of tests because people were willing to walk out of their home, meet DRU on the sidewalk and engage with it. DRU has a compartment that pops open, capable of holding what Domino's describes as an average order of pizza, sides and drinks. DRU is powered by an electric motor that lasts for 12 miles. DRU sends a text message to alert customers when it has arrived.

Gillespie said there are no plans to replace all other forms of delivery with DRU in the near future. He views the robot as a complement to its deliveries in cars and via bicycles. Asked whether delivery drivers should be concerned about their jobs, Gillespie said DRU will create many new jobs for humans, including maintaining a fleet of the delivery vehicles, and loading pizzas into DRU.

Domino's has tested a robotic delivery cart in Australia. In November, a British start-up released a similar looking self-driving robot that uses sidewalks to make deliveries. The robotic carts are an example of the coming rise of autonomous vehicles, which experts say will come in sizes and shapes that are different than traditional cars.

Gillespie said that since robotic devices such as DRU could provide faster delivery in some cases, and wanted to beat competitors to the punch.