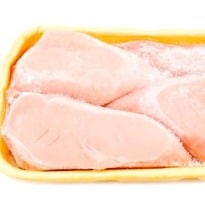 The government's food watchdog has urged consumers to stop washing chicken before they cook it to avoid contaminating their kitchen with Campylobacter - the most common type of food poisoning in the UK - which can cause death as well as serious health problems.

Research for the Food Standards Agency reveals that more than two-fifths of cooks say they routinely wash chicken as part of their food preparations. But the FSA has warned that splashed water droplets can spread Campylobacter bacteria on to human skin, work surfaces, clothing and cooking equipment.

Campylobacter is responsible for most cases of food poisoning, with around 280,000 people affected in the UK each year, and four out of five cases are caused by contaminated chicken. "While most cases result in people suffering from abdominal pain, severe diarrhoea and vomiting, some cases can lead to more significant health problems," the Food Standards Agency said.

In more serious situations, it can lead to irritable bowel syndrome, reactive arthritis and Guillain-Barré syndrome, a serious condition of the nervous system. At its worst, it can kill. Those most at risk are children under five and older people. The campaign is part of Food Safety Week.

FSA chief executive Catherine Brown said: "Although people tend to follow recommended practice when handling poultry, such as washing hands after touching raw chicken and making sure it is thoroughly cooked, our research has found that washing raw chicken is also common practice,. That's why we're calling on people to stop washing raw chicken and also raising awareness of the risks of contracting Campylobacter as a result of cross-contamination."

She said Campylobacter was "a serious issue. Not only can it cause severe illness and death, but it costs the economy hundreds of millions of pounds a year as a result of sickness absence and the burden on the NHS."

Chicken: defrost it, but don't wash it. Photograph: Alamy