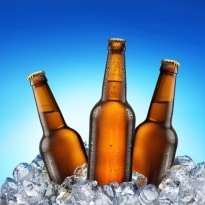 Promoted
Listen to the latest songs, only on JioSaavn.com
VI - John group, the world's largest shaving cream manufacturing company and one of the leading manufacturers of personal care, health care & cosmetics products, celebrated with Spain's beer major - Mahou-San Miguel, the launch of two new beer brands Dare Devil 10000 Premium Strong Beer and Mahou Cinco Estrallas in the Indian market. The party was hosted at The Oberoi, Gurgaon. The evening was hosted by VI John, Arian Breweries & Mahou-San Miguel, the whose and who of Delhi's political, social and corporate were a part of the celebrations.

Packaged in an attractive bottle, Dare Devil has a pale golden color to give a unique smooth and exciting taste. Mahou Cinco Estrallas has a golden yellow color with a grainy, malty flavor which harmonizes perfectly to captivate the tongue and linger on the palate. Dare Devil is categorized as a strong beer targeted at young, modern and adventurous consumers who like to experiment and Mahou Cinco Estrallas is a premium beer targeted at the young, modern, cosmopolitan consumer who wants to enjoy a high-quality premium beer.

Comments
Indian Beer market is at its early stages of development. At present, in India, the PCC is 1.5 liters per year vs. 20 L in comparable markets. Strong demographics, income growth and increasing appetite for beer among young population will fuel growth in the coming years. The beer market in India increased at a compound annual growth rate of 18.8% between 2004 and 2009. The standard lager segment led the beer market in India in 2009, with a share of 92.5%.