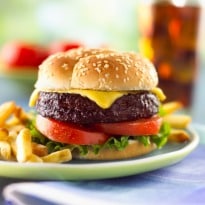 McDonald's and KFC in China faced a new food safety scare after a Shanghai television station reported a supplier sold them expired beef and chicken.

The companies said they immediately stopped using meat from the company, Husi Food Co., Ltd. The official Xinhua News Agency said authorities had ordered the supplier to suspend operations and were investigating. Dragon TV said on Sunday that Husi, owned by OSI Group of Aurora, Illinois, repackaged stale beef and chicken and put new expiration dates on them. It said they were sold to McDonald's, KFC and Pizza Hut restaurants.

The report added to a series of food safety scares in China that have battered public confidence in dairies, fast food outlets and other suppliers. McDonald's Corp. and Yum Brands Inc., which owns KFC, Pizza Hut and Taco Bell, said in separate statements they were conducting their own investigations.

"Food safety is a top priority for McDonald's," the company said on its microblog account. The company said it pursues "strict compliance" with consumer safety laws and regulations and has "zero tolerance for illegal behavior."

Phone calls to the Shanghai office of the food and drug regulator were not answered.

A woman who answered the phone at Husi's headquarters said no one was available to comment. The official Xinhua News Agency cited a company manager, Yang Liqun, who said the company has a strict quality control system and will cooperate in the investigation.

KFC is China's biggest restaurant chain, with more than 4,000 outlets and plans to open 700 more this year. The company was badly hurt after state television reported in December 2013 that some poultry suppliers violated rules on drug use in chickens. Yum said KFC sales in China plunged 37 percent the following month. KFC launched an effort to tighten control over product quality and eliminated more than 1,000 small poultry producers from its supply network.

Scandal-weary consumers on Monday expressed mixed feelings. Chen Lu, 24, an employee of an Internet company, was eating a chicken burger and fries at a McDonald's in central Shanghai that was half-empty at midday, a time when most restaurants are crowded. "My boyfriend called and told me not to eat McDonald's one minute after I ordered this chicken hamburger, but what can I do? I've already ordered and I am in a hurry," she said. "I am worried about my health," she said. "I will try to avoid it, at least for a while. I am pretty disappointed in this brand."

Promoted
Listen to the latest songs, only on JioSaavn.com
Another diner, Liu Kun, a 24-year-old student from Nanjing who was visiting Shanghai, said he was unconcerned. "The incident won't change me eating here," said Liu. "There have been negative reports all the time, McDonald and KFC are the leaders in the industry."

China has suffered a string of product scandals over the past decade in which infants, hospital patients and others have been killed by phony or adulterated milk powder, drugs and other goods. Foreign fast food brands are seen as more reliable than Chinese competitors, though local brands have made big improvements in quality.