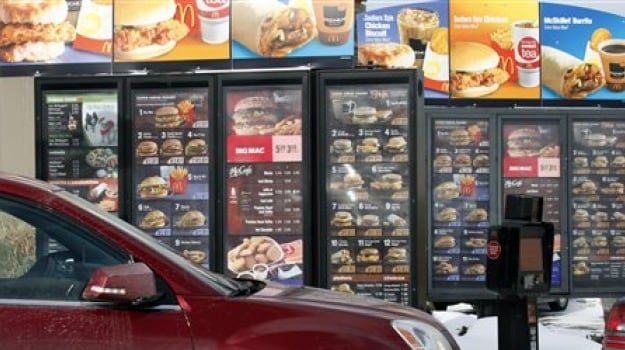 Health experts have long been blaming increased fast food consumption for the rising incidence of obesity and other lifestyle diseases. However, a recent study published in the journal Preventing Chronic Disease reveals something rather surprising.  It states that the average calorie count, sodium and saturated fat content in fast food is similar to what it was in the year 1996. Moreover, the food portion size has not changed much in all these years. While the components seem to have remained unaltered, what has changed over the years is the pattern of fast food consumption.

There has definitely been a sharp increase in the consumption of fast food but with time people have become more aware. In the wake of controversies surrounding fast food giants, most people can be seen switching from processed food items to fresh and healthy alternatives. This has prompted various fast food chains to transform their 'junk food' image. According to Greg Creed, CEO of Yum Brands, which owns Taco Bell, KFC and Pizza Hut, "This demand for fresh and real is on the rise." McDonald's Confronts Its Junk Food Image

As people express distaste for food they think is overly processed, fast food chains like McDonald's, Taco Bell and other chains are trying to shed their reputation for serving reheated meals that are loaded with chemicals. That includes rethinking the use of artificial preservatives and other ingredients customers find objectionable. Recasting fast-food as "fresh" and "real" will be tricky, in large part because it's so universally regarded as cheap and greasy. Another problem is that terms like "fresh," ''real" and "healthy" have nebulous meanings, making it hard for companies to pin down how to approach transformation. McDonald's to Trim Menu, Review Ingredients

One way chains are looking to redefine themselves is by purging recipes of chemicals people might find unappetizing. Already, packaged food and beverage companies have reformulated products to remove such ingredients, even while standing by their safety. PepsiCo, for instance, said it would remove brominated vegetable oil from Gatorade after a petition by a teenager noted it isn't approved for use in some markets overseas. The fast-food chains are indicating they want to jump on the "clean label" trend too -

- Last month, McDonald's USA President Mike Andres outlined improvements the company is working on, including the simplification of ingredient labels. Without providing details, he said to expect some changes in early 2015. The remarks came after the company reported a 4.6 percent decline in U.S. sales for November, capping two years of struggling performance. "Why do we need to have preservatives in our food?" Andres asked, noting McDonald's restaurants go through supplies quickly. "We probably don't." he added. McDonald's Disguises Itself as a Health-Food Cafe

-Subway, a privately held company that does not disclose sales, started airing TV ads for its new chicken strips free of artificial preservatives and flavors. After suffering bad publicity, the company said that earlier last year it would remove an ingredient from its bread that an online petition noted was also used in yoga mats. The ingredient, azodicarbonamide, is approved by the Food and Drug Administration and widely used as a dough conditioner and whitening agent.

-Chick-fil-A said in 2013 that it would remove high-fructose corn syrup from buns and artificial dyes from its dressings. A couple months later, it said it plans to serve only chicken raised without antibiotics within five years.

Carl's Jr. last month introduced an "all-natural" burger with no added hormones, antibiotics or steroids. "We are obviously looking at other products on our menu to see which ones can be made all natural as well," said Brad Haley, the chain's chief marketing officer.

It's not clear how far fast-food companies will go in reformulating recipes. But the nation's biggest chains are facing growing competition. In the latest quarter, customer visits to traditional fast-food hamburger chains declined 3 percent from a year ago, according to market researcher NPD Group. Fast-casual chains, which are seen as a step up from traditional fast-food, saw visits rise by 8 percent. Part of the appeal of fast-casual chains is that they position themselves as being higher in quality.

Chipotle, which touts its use of organic ingredients and meat from animals that were raised without antibiotics, said that sales at established locations surged 19.8 percent in the most recent quarter. On the other hand, Panera has vowed to remove artificial colours, flavours and preservatives from its food by 2016.

The ethos of wholesome ingredients is increasingly being embraced across the industry. But not without some challenges. Dan Coudreaut, Executive Chef at McDonald's, has noted difficulties in changing recipes. In an interview last year, he said that McDonald's is looking at ways to use culinary techniques to replace the functions of certain ingredients. "If you take (an ingredient) out, what are you giving up?" he said.

Michael Jacobson, executive director of the Center for Science in the Public Interest, said that there are likely many cases where artificial preservatives or colours could be replaced with natural alternatives without significant costs. Since their functions vary, companies would have to evaluate recipes product by product.

"Sometimes, food additives can be crutches or insurance policies. If a food is frozen, germs aren't going to grow. But preservatives might be added just in case, or they may be used just because their supplier has been using it for so long," he said, adding that such changes are 'not a big deal' in terms of the overall health.

Michele Simon, a public health lawyer and author of "Appetite for Profit: How the Food Industry Undermines our Health and How to Fight Back," also shared that getting rid of additives here and there won't be enough to change the way people think about fast-food. "That's just rearranging the deck chairs on the Titanic," Simon said. "These companies have a fundamental problem in who they are," he stated.