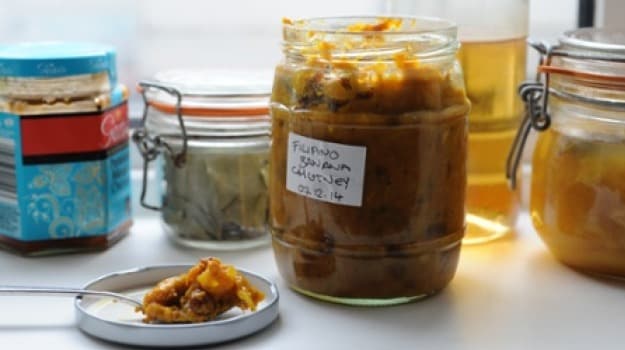 Your condiments zing with unlikely combinations, such as banana and chilli.

This week's theme has been the most practical and productive yet - my cupboards are now stacked with an array of pickled condiments with which to clean up Christmas leftovers.

Fadime Tiskaya's pomegranate and cranberry chutney gives traditional festive flavours a modern twist with the addition of pomegranate and apricot; Shaheen's Scotch bonnet and apple chutney is perfect for anyone with a high chilli tolerance, adding kick to any cheeseboard. The rough texture of TwinnyDip's carrot chutney is a lovely break from the norm, while Myusuf's quick tomato chutney with boiled eggs, zingy ginger and chilli is just the thing you want after a Christmas of hangovers and stodgy food.

Marmaduke Scarlet's winning Filipino-style banana chutney recipe was quick to make, punchy and, like all good chutneys, turned all food that accompanied it into a mere vehicle. Without a doubt, this is my new go-to for using up ripe bananas.

I am a relatively recent convert to bananas and this is the recipe that won me over. It started out as a Filipino-style ketchup, but I prefer this chunkier version. Gorgeous with roast pork or chicken, or as an accompaniment to curries. Stir a little into egg mixture for a spicy frittata, or use with burgers and hotdogs. I like to dollop a load of chutney into mayonnaise to eat with fish and chips, instead of the classic tartare sauce. This recipe has a bit of a fascinating history, if true (I do so hope it is). The story goes that during the second world war, the Filipinos developed a love of tomato ketchup, introduced by Americans. When the troops left, the Filipinos came up with an ingenious way to compensate for the sudden lack of tomatoes - and used bananas instead.

1 Gently fry the onion in the oil over a medium heat until it begins to soften - about 10 minutes. Add the chilli, garlic, ginger and spices. Stir through so that they are well-coated in oil and the mixture is fragrant.

2 Add the bananas, sultanas, vinegar, honey, rum (if using), tomato puree, soy sauce and salt, then bring to the boil. Simmer for 15 minutes, stirring regularly to ensure that the liquid doesn't catch. You may need to add a splash of water. Remove from the heat and set aside to cool for 10 minutes.

3 This chutney benefits from a few days' resting time, to allow the flavours to mellow a little. Will last well for several months in an airtight container in the fridge. For ketchup, whizz the ingredients in a blender until smooth. Add a little water if a thinner consistency is preferred.

From its colours to its flavours, this chutney just speaks of Christmas. Rich, sticky, sweet, sharp and spicy, it goes well particularly well with cheese or cold meat.

300ml pomegranate juice (the juice from 2 large pomegranates is enough)

1 Wash the cranberries, remove any stalks and rotten ones, then set aside to drain.

2 To make the juice, slash the skin of each pomegranate in four places from top to bottom and hold it with both of your hands. Put your thumbs on top and tear it open into halves. Hold each quarter over a large bowl, seeds facing down, and with your thumb and fingertips, release the seeds. Break each quarter into smaller pieces and remove the pith as you work your way in to get all the seeds out. Discard the pith and outer skin. With a potato masher, mash the seeds in the bowl. Sieve it over the pan you will be using to make the chutney with. With a large spoon or ladle, press the fruit into the sieve to get as much juice out as possible - discard the seeds.

3 Put the honey, 70g of the sugar, pomegranate molasses, red wine vinegar, cloves and cinnamon sticks and juice in a saucepan and stir it until the sugar dissolves. Mix in the mustard seeds, cranberries and apricot, then over a medium heat bring to simmer and turn the heat down to let it simmer. The chutney will be ready after 40-45 minutes, when it is reduced almost by half and is thick.

5 Once cooked, turn the heat off, then mix in the orange zest. Take the cinnamon sticks out and transfer the chutney into sterilised glass jars. Let it cool completely before you put the lids on. Store it in the fridge and use within a month.

Father would make his tamartar ki chutney on lazy sunday afternoons. It would often appear at a time that was too late for lunch and too early for dinner, upsetting the balance of the day's meals, but it did not matter because it is a firm family favourite. This express tomato chutney is great topped with boiled eggs and best eaten with hot naan bread.

A splash of water

1 Place a karahi or wok on a medium to high heat, then dry fry the tomatoes. They should soften and release all their moisture - around 10 minutes. Allow some of the moisture to dry out with the heat before adding the oil and salt.

2 Continue to fry the tomatoes until all the moisture evaporates, the oil separates from the tomatoes and the contents of the pan looks like a very thick set jam - 15-20 minutes. Add half of the coarse pepper to the chutney, then reserve the rest for serving.

3 The chutney is ready when it seeps oil and has a jam-like consistency. If it is very thick you can add a splash or two of water to loosen it.

4 Halve the eggs and place them on the chutney, then scatter the julienned ginger, chilli and remaining pepper over the top. Serve it with hot naan, barberry or pitta bread.

This recipe calls for the most basic of ingredients, but it never fails to impress. Invitingly orange in colour, mildly spiced and with the delicious sweetness of the humble carrot, this chutney sits really well on a cheese platter. Great served with a sharp and mature cheddar, a slightly acidic but mild Wensleydale or other sharp cheeses. Without being overpowering, mustard seeds add a mild but uplifting fragrance. If you want a spicier chutney, add a little bit of spice to the mix (see suggestion below)!

Salt and black pepper, to taste

For the optional spice mix

A small pinch of chilli flakes

2 Bring to the boil and let it all simmer on a low heat for about 1 hour, stirring occasionally, until the liquid has reduced to the desired consistency. Season to taste, then transfer the chutney to sterilised jars.

What happens when the red hot Caribbean Scotch bonnet kisses the sun-blushed British apple? You get fiery Scotch Bonnet apple chutney. You will need a slow cooker for this recipe.

1 Heat the oil in pan and gently fry the onion, ginger and garlic until it starts to colour, then add the spices and cook for another 3 minutes. Transfer to a slow cooker.

2 Add the vinegar, apples, Scotch Bonnet, sugar and salt. Cook on high for 1 hour, then turn down to low and cook for 5-7 hours. Halfway through cooking, when the chillies have softened, take them out, cut them open, scoop out and discard the seeds. Mince the chilli skins and return them to the pan. You can leave them whole with the seeds, but I prefer to tread carefully with the chilli at first. When done, put into hot, sterilised jars and seal at once with lids.

Legend has it that the Filipinos developed their own take on ketchup after the Americans introduced it during the 1940s. Photograph: Jill Mead/Guardian