Fish to Brinjal Fry, Take Your Pick at Puja 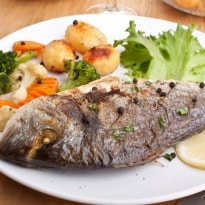 From piping hot luchis and khichdi with a Bengali twist to lip-smacking fish dishes, foodies are spoilt for choice during the five-day Durga Puja, which seems incomplete without community feasts. And, yes, there is no staying away from non-vegetarian fare even though it is a religious occasion.

The Durga Puja festival began Sunday. But the mouthwatering celebration of food that it brings began a day earlier with Anandamela - which raises a toast to women's entrepreneurship as much as to food -- organised in many localities.

As per tradition, women sold handicrafts and other products, but the biggest draw was the delicious dishes prepared by them. For those with a sweet tooth there was 'malpoa', sandesh and chandrapuli (a type of pancake) to be had, while others could gorge on snacks like ghugni and singara, Bengali form of the north Indian samosa.

"This is fun. I sold 100 malpoas and earned Rs.1,000 this Panchami. Even my husband bought the sweets from me at the pavilion," Sharmishtha Ghosh, a young home maker, told IANS.

On Shashti, the first day, women in many households keep a fast during the day, praying for the wellbeing of their families. But in the evening, it was time for luchi - a type of poori - which is typically prepared alongside cholar dal, brinjal fry and some other vegetable dishes.

Rice returns as a staple diet the next day, Saptami, when some households where puja is organised go vegetarian while others relish fish and even mutton and chicken at home or in restaurants.

The puja fervour reaches a climax on Ashtami, when khichuri - a Bengali version of the north Indian khichdi made of rice, lentils, potatoes and cauliflower - is savoured by many.

Many side dishes are also on offer such as doi potol, chanar dalna, dhonka, served with chutney, papad and sweets. Some households and community puja organisers host feasts and the spread is generally vegetarian, beginning with khichuri or luchi.

However, traditionally, it is on the next and penultimate day of the puja - Navami - that people visit friends and relatives and partake of 'bhog' or community feast offered to the goddess first.

The bhog comprises a wide range of items, from luchi and khichuri to vegetable items like beguni or brinjal fry, labra or a dish of mixed vegetables and chutney. The Bengali with the sweet tooth can indulge herself with pantua or payesh.

But nowadays, Navami is considered an occasion by many Bengalis for satisfying their eternal love for fish. This trend is especially followed by the well-off among those organising the puja at home, who treat their friends and relatives on this day.

"There was a time when I only cooked vegetarian dishes till Mahanavami. But now things have changed. Often, and this is mainly true for posh housing complex pujas where all residents eat all their meals at the pandal on all five days, I am asked to cook at least one non-veg item with every meal," Punya Mahapatra, a veteran professional cook, told IANS.

Dashami, the last day of the puja, comes with a tinge of sadness as it is the day of immersion of the Durga idols. But it is also a day of sweets. After immersion, people partake of siddhi chire. Then they exchange sweets like sandesh, bonde, mihidana and gaja.

CommentsThe feast at community puja marquees and at households on the last day ends with a dinner of mutton and rice. As per tradition, the cooking of mutton starts after a signal to the cooks that the idols have been immersed.