Food Tripping: Why Edible Rainbows Have Taken Over the Internet 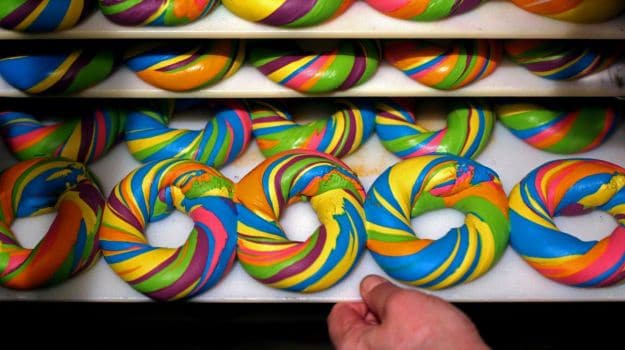 A tray of baked Rainbow Bagels at the Bagel Store in Brooklyn. (Yana Paskova/for The Washington Post)

Dorothy could. But social media cannot get over the rainbow, at least when it comes to food: We're seeing more and more of the color spectrum in our cakes, cookies and even coffee. Last month, a Brooklyn shop selling rainbow bagels reported waits of four hours to get its neon creations. And last week, a polychromatic grilled cheese lit up the Internet. That grown-ups have an appetite for nostalgic kid cuisine is nothing new; but lately, it's as if Funfetti is a virus, and nothing edible is immune.

There are cake balls that look as if they've been made from Play-Doh. Tie-dyed waffles, psychedelic s'mores. Orange peels filled with every color of Jell-O. Multicolored cookie parfait. Cakes with white frosting, but when you slice into them - surprise! A perfect ROYGBIV. Not even matzo is safe.

For makers of colorful icings and food dyes, it's a pot of gold.

"Everybody has a pleasant feeling associated with a rainbow. It's a beautiful thing," said Beth Somers, director of creative content for Wilton Brands, a manufacturer of cake decorating supplies and ingredients. "It's kind of a fun thing to put it into a food format, and just play with it."

Wilton, which sells 24 gel-based hues that can be used in icing and baked goods, has been flooding its Instagram feed with ombre and rainbow-colored recipes for home cooks to try, like its candy curl rainbow cake and rainbow shot glasses. It markets its multi-layer cake pan set as a tool for making the popular rainbow layer cake that has become a stalwart of birthday parties, same-sex weddings and Pride Week celebrations. Although the company has seen a sales increase in its icing colors since 2013, a spokeswoman said she could not directly attribute it to the trend.

For many of the recipes, the only special equipment you need is food coloring. It's "a little bit time intensive, but not hard. There's almost nao skill to it at all," said Somers. So Instagrammers - where these Rainbow Brite creations are incredibly popular - get "a lot of visual bang for your buck," said Somers. And plenty of bragging fodder, too: In our photograph-everything era, the rainbow dishes seem like a form of visual one-upsmanship, with home cooks and professionals alike striving to make the most perfect-looking Crayola box of a cake.

"Sharing on social media, that's such a big deal, the 'Look what I made, I made it myself,'" said Somers. "I think people get so much validation from that now."

"Seeing the colors flow in their structured form makes people feel good," said Brittany Wright, a photographer whose Instagrams of rainbow-colored food, from vibrant citrus to prismatic popsicles, have earned her 160,000 followers.

But not everyone feels good about it. After all, the taste-the-rainbow-trend is at odds with the direction our food culture is taking.

It "seems to be going against the natural foods trend, which is that a symphony of brown is something to be celebrated, ugly food is delicious, heirlooms are beautiful and things don't have to look perfect," said Tess Masters, the author of "The Blender Girl," a gluten-free, vegan cookbook.

According to a 2015 study by Consumer Reports, 62 percent of shoppers seek out foods labeled "natural." And 48 percent think it is "very important" to avoid artificial ingredients, a result 17 percentage points higher than the previous year. Companies such as Nestle and Kraft are phasing out artificial coloring in their products. Some recipes for these rainbow dishes have instructions for creating an all-natural spectrum on your plate - fruit salads arranged according to hue, for example. But all of that seems to go out the window when another artificially colored confection gets the hands-and-bowls viral video treatment.

Baked goods, where we're used to seeing fanciful colors, are one thing. But now there's rainbow savory food, too. In addition to the aforementioned grilled cheese, there have been two types of rainbow pizza. There's also rainbow pasta, made by dumping cooked noodles into bags of food coloring and mixing them together for a plate that looks like a Brice Marden painting. It's only just the beginning. Somers thinks we will see more artificial rainbows on the dinner plate as cooks' creativity reaches new and terrifying depths. What's next: rainbow sausage? Rainbow lasagna? Rainbow coq au vin?

"Meat of any kind seems like it shouldn't be rainbowed," said Somers.

Another hilarious or unfortunate application of the trend, depending on your sense of humor, is its affiliation with unicorns. That's due, in part, to an Internet meme that asserts that the one-horned mythical creatures, um, excrete rainbows and glitter. Which, in turn, has become nomenclature for a number of rainbow-colored desserts: A mound-shaped sparkly, rainbow cookie called Unicorn Poop was among the first of the multicolored creations to ride the recent wave. The work of Los Angeles baker Kristy Therrien (who has trademarked the term), the cookies have been featured on Anderson Cooper's former talk show, "Anderson Live," and have expanded into a line of baked goods that include candy-filled unicorn horns.

The meme even inspired an advertising campaign for the Squatty Potty, a home bathroom aid, with a video depicting a unicorn, er, producing cones of rainbow soft-serve ice cream. "This is where your ice cream comes from: The creamy poop of a mystic unicorn," says the commercial. Makes you think twice about Instagramming that rainbow smoothie, right?

Potty talk aside, many of these recipes aren't necessarily going to turn out looking as good as they do online. Food styling tips and lighting can make the rainbow appear more vibrant on a screen than it will be in your average home cook's kitchen. And as every kid with a multi-pack of Play-Doh learned early on: If you don't keep things separate, and instead mix every color in the rainbow together, you get a muddy, pukey gray-brown. The potential for Pinterest Fails is high. For that grilled cheese, for example, "you're only going to get that rainbow with the cheese pull, and it's really hard to do a perfect pull," said Somers, referring to the just-melted, oozy strands of cheese. "I don't think the visual wow is the same as when you cut into a cake."

And that wow is what this is really all about. How do these Lite Brite bites taste? Well, as long as they look good, who cares? Even Masters concedes.

Watch: This Set Dosa Is Made Without A Drop Of Oil (Recipe Video)
Slurp Alert: Sonam Kapoor's Chocolate-y Treat Will Trigger Major Cravings (Pic Inside)