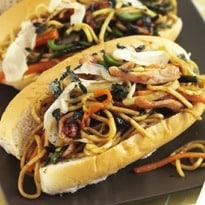 While in the UK and US we might be found wolfing burgers and kebabs after a night out, I like to imagine the Japanese scarfing down fried-noodle sandwiches, or yakisoba pan (yakisoba meaning "fried noodles in sauce" and pan meaning "bread"). Apparently this sandwich is widely available in convenience stores. Noodles are fried with vegetables such as carrot and bell pepper, then seasoned with yakisoba sauce (an intense, umami-rich concoction) and stuffed into a hot-dog bun. The sandwich is finished with strips of pickled ginger, dried seaweed and often sweetened mayo.

Mix together until combined:

To make the sandwich

Heat a wok over a medium-high heat and add a little vegetable oil. Fry the bacon strips in this until they start to turn crispy, then remove them from the wok and set aside.

Fry the vegetables in the same wok you used for the bacon, and when they are starting to color but still retain some crunch, remove them and put them to one side.

Meanwhile, cook the noodles according to the packet instructions, then drain.

Add a little more oil to the wok and add the drained noodles, stirring them constantly. When they are beginning to get crispy in places, add the yakisoba sauce. Stir through the vegetables and bacon, making sure everything is piping hot.

When ready to serve, pile the noodle mixture into the buns and garnish with a final drizzle of yakisoba sauce, strips of pickled ginger and a sprinkling of dried seaweed, if using.