Ganesh Chaturthi: A Ludhiana-based chocolatier shared a picture of a beautiful chocolate Ganesha idol made from over 100 Kgs of Belgian chocolate. 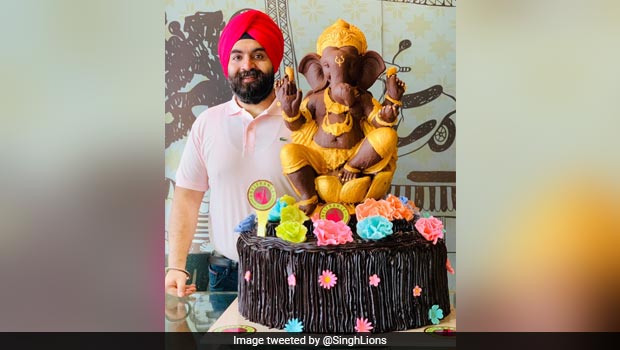 During the festival of Ganesh Chaturthi, pictures of brand new idols of Ganesha start flooding the internet. Snapshots of brightly-painted idols installed in homes and offices around the country start making their way on social media pages which take on a festive hue. Nowadays, the welcome trend of eco-friendly Ganeshas has also caught on. Idols made from various recyclable materials, edibles and greener materials have become quite the rage. But one particular Ganesha idol stood out in this mass of unique Ganesha idols - a chocolate Ganesha made from over a 100 Kgs of Belgian chocolate! The idol has caught the fancy of the internet, not just because of the innovative use of chocolate to make it, but also for the effort and noble thought that has reportedly gone into creating it.

The idol was created in 10 days with the collective effort of 20 chefs and it looks simply marvellous. A picture of the idol was posted on Twitter by Harjinder Singh Kukreja, who revealed that this was the fourth year that they were creating this unique edible idol. Instead of immersing the Ganesha in water as is customary, Kukreja said that the Ganesha will be dissolved in vessels of milk to make chocolate milk, which will then be distributed among underprivileged kids.

Take a look at Kukreja's tweet with a picture of the divine-looking Ganesha:

This is our 4th consecutive year of the Chocolate Ganesha! It took a team of 20 chefs, 10 days and 100+ Kgs Belgian Chocolate to make this eco-friendly Ganesha. pic.twitter.com/EN85okaNx8

The idol was prepared under the guidance of the Ludhiana-based chocolatier. A report on the edible Ganesha by news agency ANI quoted him as saying, "To spread the message of peace and harmony, this project was especially been given to a Muslim artist, who fashioned out a beautiful idol with chocolate."

It was prepared by using 106 Kg of Belgian chocolate. The idol does not leave behind any toxic waste, as is often seen in the case of regular idols made from Plaster of Paris (POP). The paint used on regular Ganesha idols wreaks on biodiversity on beaches and around water bodies as these are non-biodegradable.