Ghewar is a Hit During the Teej Season 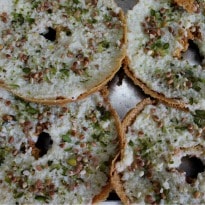 As confection makers experiment with new flavours and colours to suit changing tastes, particularly of the young, the demand for ghevar, or honeycomb dessert, has outstripped that of all other sweets, including petha and pedas, in the Braj area of Agra and Mathura ahead of Friday's Teej festival that celebrates the monsoon.

Ghevar is a circular disc of maida (flour) mildly fried in moulds, soaked in sugar syrup and dressed with rabri or dry fruits. It is available only during the monsoon months and is on sale all sweetmeat shops across the Braj Mandal.

"The taste is obviously impacted by the quality of the cooking medium. Pure ghee flavour is distinct but makes it expensive," Shishir Bhagat of Bhagat Sweets told IANS.

It originated in Rajasthan, where Teej is a major festival, where ghevars are available in many colours and varieties including plain, mawa, malai, very colourful and easy on the palate, he added.

During the Raksha Bandhan festival also called "Saloonau" in the Braj area, bridegrooms usually go to their in-laws with boxes of ghevar. In Rajasthan, and now in Agra too, fenni, also made of flour, is also liked during this season. "Some people dip the Fenni in hot milk and eat it like a faluda," Bhagat pointed out.

Honeycomb dessert can also be made at home."The trick is to pour the maida (flour) batter in boiling ghee at the right temperature. The batter is made of milk, ghee and water is slowly added. The dough is poured into a mould very slowly so that holes or pores are made. Since it's a tricky process needing lots of practice I would suggest you buy it from a halwai (sweetmeat maker)," homemaker Padmini Devi said.

"The reason why ghevar is made only during the rains is that a degree of moisture is necessary. But now, people like crispy ones. The eating trends have changed a lot these days. People want to have ghevar a month before Raksha Bandhan. The desi (pure) ghee ghevar is priced around Rs.300 per kilo while the sugar-free ones are being sold between Rs.450 to Rs.500 per kilo," Bhagat said.

"Mango and chocolate flavours are also available. The packing boxes have also to be circular and made of good stuff to keep them fresh and crispy," Bhagat added.

Amit Sisodia who organises heritage walks through Taj city Agra, said he would soon take tourists to Seth Gali which has a line of sweetmeat makers, to see ghevar being made.

"The Agra cuisine, which includes an array of desi ghee ki mithai (sweetmeats made in pure ghee), is also part of the city's Mughal heritage. The Teej festival used to be a great occasion for celebrations in the Mughal empire, an influence of Rajasthani culture. Ghevars were distributed alongwith other sweets" Sisodia told IANS.

"Despite all kinds of health problems and increasing incidence of diabetes, there is no fall in the demand for Agra's sweets," Siddharth Mishra, a doctor who has developed a Revival Health Programme, said.

3 Quick And Easy Ways To Use The Leftover Chicken At Home
PM Modi Tries Litti Chokha At India Gate: 6 Things You Should Know About The Bihari Delicacy