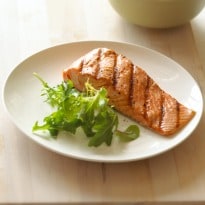 Genetically modified (GM) salmon could soon be on supermart shelves soon after America's Food and Drug Administration (FDA) ruled in its favour.

The FDA has already indicated the AquAdvantage salmon safe for human consumption and published a draft ruling Friday declaring it unlikely to damage the environment.

Their two extra genes make the species grow twice as fast as normal Atlantic salmon and supporters say it could make land-based fish farms much easier and cheaper to run, the Daily Mail reports.

But opponents of the 'Frankenfish' technology warn it could escape and interbreed with wild fish undermining the genetics of the already-endangered Atlantic salmon - known as the 'king of fish'.

They also argue that commercial production of the salmon could be beginning of concerted efforts to concoct other GM animals for human consumption, raising concerns about animal welfare and human health.

There are now few hurdles remaining before the GM fish can be lawfully produced and sold in shops in the U.S., which could put pressure on Britain and Europe to follow suit.

Several government and EU bodies would have to review the technology before it could be approved in Britain, but many government scientists have already backed GM as a concept for increasing food production.

So far, it is only consumer opposition that has blocked the approval of GM foods in Britain, although some products on supermarket shelves already contain GM ingredients and they are regularly found in animal feed.
Listen to the latest songs, only on JioSaavn.com
AquAdvantage salmon are all female, possess three chromosomes instead of the usual two and grow to market size in 16 to 18 months instead of the usual 30 required for Atlantic salmon.

AquaBounty Technologies, the company behind the fish, claim the risk of interbreeding with wild salmon is low because their fish are all sterile and grown in secure containers on land-based fish farms.