Shaking Up The Salt Myth 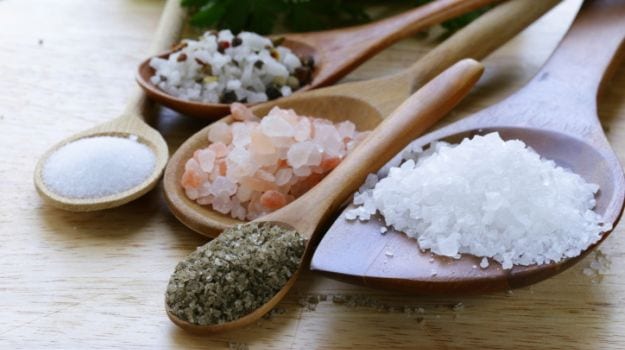 You can't live without salt. You don't want to. Salt is the workhorse of the kitchen, the one ingredient in a cook's arsenal that creates magic. The ability of salt to change the taste of food is a marvel. It can dial down bitterness, bring out sweet tones, turn up the volume on natural aromas and make flavours in your food sing.

The science of salt

It's widely preached that you should eat less salt to maintain healthy blood pressure levels. That claim is a bit of a mystery. Don't take my word for it, but the actual evidence to support it has always been so weak. The idea that less salt is not always better is hard to digest, especially when you've got fast food chains and the processed food industry laying it on thick. Nothing justifies exaggerating, but that doesn't mean the benefits are all a wash.

Salt in its purest form is made of sodium and chloride. Your body can't produce these elements on its own, so you must get them from your diet. Sodium controls the volume of fluid in the body, aides the passage of various nutrients into cells, and maintains blood pressure.

When you eat more salt, your body retains water to stabilize the concentration of sodium in your body. That's why salty foods make us feel thirsty. The more we drink, the more we retain and this can cause a temporary rise in blood pressure. This may persist till our kidneys begin their work of eliminating both salt and water. The scientific question that arises here is whether this temporary phenomenon can trigger chronic problems like hypertension and heart disease? Yes, if we eat TOO much salt.  But then again, hypertension is promoted more by excess fructose than excess salt.

According to the current guidelines of World Health Organization, adults should limit their salt intake to less than 5 grams (about one teaspoon) per day.  Cutting back has a downside as the upper limit has continued to shrink in all these years. Despite its recent bad press, there is no doubt that adequate amount of salt is required by the human body. Low salt diets contribute to an increase in hormones and lipids in the blood. People may develop low blood sodium or hyponatremia that can cause a decrease in mental abilities like attention and memory. It can make you nauseous and cause headaches, muscle cramps, fatigue, loss of energy and restlessness.

Banishing salt is not required or even desirable, but experimenting with new varieties is.

How does salt make everything taste better?

Homer calls it 'a divine substance'. Salt is a flavour enhancer and the most potent one. But, besides that it actually affects the cooking process in several ways.

As a dehydrator, it can help draw moisture out of sweating vegetables, softening them faster. While blanching, a pinch of salt can bring out the colours of the veggies. It hastens the cooking process by breaking down the substances (hemicelluloses) that hold vegetable fibers together. Salting the water can also minimize nutrient loss as pure water is known to draw the minerals from the interiors of the vegetables. Moreover, you must salt the water while cooking starchy ingredients like rice, pasta or potatoes. Salt permeates the ingredients more deeply and improves the flavour.

Salt brings out the best in food.  Food Blogger Reshmy Kurien shares, "I like to soak cherry tomatoes in salt water before using them in salads. This helps in drawing out the flavours and makes them taste just so much better. Even when you caramelize onions add a pinch of salt and cover it for a while. It'll cook faster and turns out with the right crunchiness."

Salt is also key to adding moisture to food.  It works wonders with meat in marinades and for curing. Some chefs suggest that you place the whole chicken in a brine solution (salt  water) overnight before roasting. Reverse osmosis sets in as the concentration of salt in the brine is more than the protein-rich liquid inside the meat and so the water is absorbed by the flesh.  This makes the meat marvelously tender and juicy. The actual method is derived from brining turkey.

In fact, the best way to enjoy the flavours of meat is to only salt it and stuff it with some fresh herbs. Seasoning meat with salt draws out the juices that dry on the surface while roasting. This creates a crisp crust and gives you the perfect golden glow.  Salt can play so much with moisture which is why it is crucial to cooking.

This takes me back to the memory of those tall martbaans that beautifully sat on my window sill soaking up all the sun and the intense homemade pickles that crowned my table, thereafter.  Sadly, the art of pickling seems to be dying. But know that salt plays a lead role in the process of pickling. It is added as a preservative and controls fermentation. When it is left to dry, salt-tolerant micro-organisms grow and produce acids that add flavour to the pickle. It extracts the excess water, concentrates the juices and gives the fruits or veggies a firm texture.

I always appreciate a slight pinch of salt in my desserts. It gives life to all the nutty flavours. The contrast of mellow, sweet tones and the crispness of salt can hit the right spot. The salty-sweet connection defines indulgence for me. Salt in baked goods can also develop textures.

Taste and taste again. A good chef is one who offers a perfect balance of seasonings and salt is one ingredient that sharpens all the other flavours. To make sure, you must add salt in layers and constantly taste your food. If you are adding salt for seasoning and not the above reasons, add it right before serving. That way, salt crystals will hit your palate directly and the flavours will be more impactful.

Choose wisely. Your common table salt is one that is fortified with iodine and may contain additives. It is very fine and dissolves the quickest in food, but there's a wide world out there worth salting out. No two salts are the same. You need to master the art, one flake at a time. The three things that you must keep in mind while taking your pick are the intensity of the salt, the nature of its crystals and where to sprinkle.

(From rock salt to sea salt, find them all here at affordable prices)

Sea Salt: I am huge fan of sea salt, a treasured staple in my kitchen. It is a finisher. Sprinkle it in your salads or over breads. I love to pop a crystal or two with every bite. Sea salt is obtained by evaporating purified sea water at low temperatures. You'll find two types - fine-grind and chunky flakes. It is more intense than the common table salt. Avoid using it in cooking or baking as the big granules don't dissolve easily and may affect the texture

"We serve 'Edamame Sea Salt' where the beans are blanched and finished with a generous sprinkle of sea salt. It gives it a lovely coarse texture," Chef Vikram Khatri from Guppy by Ai.

Another one of my favourites is the Salt Baked Beetroot at Olive. "Beetroot is covered with sea salt and egg whites and then baked for about two and a half hours. It then cut in chunks and served as a salad," explains Chef Sujan from Olive, Mehrauli.

Black Salt (Kala Namak): This one evokes flavours of childhood when my grand mom would offer me a slice of guava or melon rubbed with some black salt. I have to agree, a sprinkle of black salt wakes up all the flavours. Black salt is an Indian volcanic rock salt with a distinct pinkish hue and somewhat sulfurous taste. The colour comes from iron and other minerals. In Ayurveda, it is considered as a cooling spice.

It's a great companion to all your deep-fried snacks. Chef Vikram dishes up a 'Chicken Karage' with a pinch of black salt. "Chicken breasts are marinated with soya, ginger, garlic, rice wine and black salt. These are then deep fried and served golden," he shares.

(Get Kala Namak Delivered to Your Door)

Rock Salt: This is the purest form of salt - unprocessed and raw. Also known as sendha namak, it is used during Navratri fasts across North India. These large crystals were used in traditional ice cream makers to regulate the temperature. It is lower in sodium than table salt and less salty than others. It is usually mined from underground deposits left by dried lakes.

Himalayan Pink Salt: Hand-cut slabs are derived from the natural salt deposits found in the Himalayan foothills and the Punjab region of Pakistan. It is naturally rich in iodine. These blocks of opaque pink salt are known for their pure taste and infuse rich flavours. The pink color is due to the presence of iron oxide.

American food writer and entrepreneur, Mark Bitterman has been playing with finishing salts and Himalayan salt blocks for few years now. In his book, Salt Block Cooking, he explains, "Himalayan salt blocks have very little porosity and because they have virtually no moisture, they can be safely heated or chilled to great extremes."  This makes it very versatile. You can crumble it over your food or cook on. Bitterman uses salt blocks to saute, grill, chill, cure, bake, and even as a platter to serve.  When foods are cooked over these blocks they acquire a delicate saltiness that sets them off perfectly.

(Shop of the best quality and 100% organic Himalayan Pink Salt)

Fleur De Sel: Fleur De Sel literally translates to 'the flower of salt'. It comes from French coast of Brittany and the process of making it tends to be very laborious. It is a hand-harvested sea salt. Therefore, it is exclusive and expensive. It requires the right mix of sun and wind for it to bloom like a flower on the surface of the water. The top layer is then collected by workers.  It is moist and flaky. It melts quickly which makes it perfect for baking and desserts. It's earthy, delicate flavour lingers on the tongue. I'd use it for special occasions.

Promoted
Listen to the latest songs, only on JioSaavn.com
Kosher Salt: Chefs love this salt, its coarse texture and large crystals. The name comes from its use in koshering meat as per Jewish laws which involves removing blood from the meat. The large crystals allow it to cover more area without being fully absorbed into the meat. This along with the roughness of the crystals makes it perfect for curing meat. The flakes are flat unlike the cubic-shaped table salt crystals. Since the grains are larger than table salt it doesn't stick to your fingers and it is easy to add just the right amount. It lends a light crunch and a subtle salty flavour.

CommentsThe sea of seasonings is vast, but it's important to know how it all shakes out. Salting mindfully with a basic understanding of its properties is the way to go.