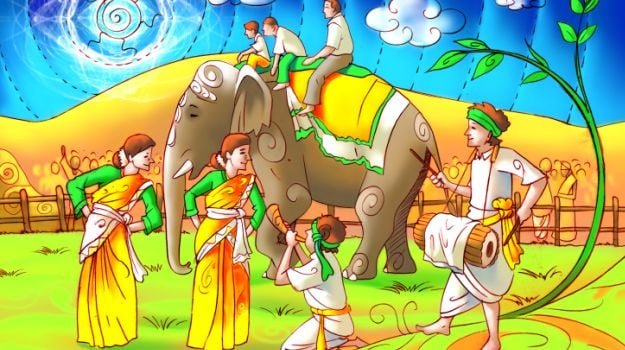 The ongoing festivities of Bohag Bihu mark the traditional Assamese New Year. It is celebrated on the first day of the Hindu solar calendar. Like other harvest festivals of the country, Bihu also involves the farmer community thanking God for the good harvest coupled hoping for abundance in future as well. The word 'Bihu' is believed to have originated from the word 'Bishu' which means 'to ask for peace', the word gradually transformed to 'Bihu' as per the local linguistic preferences.

Bihu is widely celebrated thrice in a year signifying the three distinct farming cycles. Bhogali bihu, also known as Magh Bihu, is celebrated in the month of January and marks the end of the harvest season. Then comes the Bohag Bihu which is a celebration of spring, colours and revival. This is the traditional Assamese New Year which also signals the start of the fresh harvest season. Bohag Bihu (Rongali Bihu) is celebrated in the month of April and coincides with other similar festivals like Baisakhi, Vishu as well as the Tamil New Year. It brings along a lot of festivities, singing and dancing. People celebrate by singing and dancing to the traditional Bihugeets. Young women can be seen performing the traditional Bihu dance. KongaliBihu is observed in the month of October.  While the crops are still in the growing stage, people offer praying and perform a small puja to ensure good harvest and agriculture produce.

The Bohag and the Bhogali Bihu involve ocooking of certain food items like green leafy vegetables (xak) to celebrate the successful harvest and the abundance of crops. Other food items that assume significance during the festival include coconut, jiggery, rice, sesame, milk and milk products. A few communities indulge in brewing fresh rice beer and cooking meat.

Since BhogaliBihu celebrates the end of the successful harvest season, it primarily involves making the best use of the agricultural produce - by feasting! Mass feasts are organized across the state. People visit kith and kin to exchange greetings and home cooked food.

If you are in mood for some traditional Assamese food, look no further! We have four sensational preparations that come straight from the local kitchens of the beautiful state. Recipes that are time-tested and screened by our best chefs. From a tangy and piquant olive-jaggery chutney, heartwarming pumpkin oambhal to the traditional Assamese fish curry and the well-loved dhekia Xak - this Bohag Bihu, celebrate with the best from Assam.