Heston Blumenthal Served up Another Michelin Star for Dinner 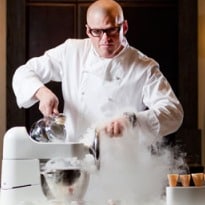 Heston Blumenthal, mingler of lab and kitchen, purveyor of gastropod porridge and architect of out-sized exercises in edible nostalgia, has added a sixth Michelin star to his growing empire.

The latest edition of the annual guide to the best food in the UK and Ireland has decided to award a second star to the chef's London restaurant, Dinner by Heston Blumenthal, because of its "glorious celebration of Britain's culinary heritage".

The latest star joins the three Blumenthal has won for the Fat Duck at Bray and the single one he holds for The Hinds Head pub in the same Berkshire village.

Arnaud Bignon's The Greenhouse, in Mayfair, London, also received a second star in the 2014 guide, which gives the UK and Ireland a combined total of 167 stars.

Blumenthal said he was overjoyed to win a second star for Dinner, adding: "It's been an incredible two and a half years for Dinner and this is just simply the highlight. As a Brit, I am very proud that a restaurant inspired by and celebrating historic British cooking has been recognised today."

Ashley Palmer-Watts, who heads the team at the restaurant, said he was "just blown away".

The guide's editor, Rebecca Burr, said that like many big-name chefs, Blumenthal had managed to find and train people who shared his passion and commitment to unflaggingly high standards.

"When Dinner opened, it really did reach a very high level but already from those early days we did think it was destined for more, but we needed to see consistency - which is a bit of a byword for Michelin - across the menu on every dish," she said. "They serve pretty big numbers there but what sets them apart is that they're celebrating our culinary heritage and that's really great to see."

Among the 15 restaurants to win a single star were Wilks, "an unpretentious neighbourhood restaurant" in Bristol, and Campagne, "a contemporary Kilkenny restaurant run by a dedicated couple".

The relentlessly hybrid flavours of Peru have continued their northern conquest, with the London restaurant Lima becoming the first Peruvian restaurant to win a star in the UK or Ireland.

Gabriel González, its co-founder and managing director, said the award - while totally expected - was deeply appreciated.

"It's a massive morale boost for the team and everyone is happy," he said. "But now it's time to work harder and maintain quality and delivery."

González, who believes Peruvian food is "the most sophisticated gastronomy on the South American continent", offered several reasons for the capital's newly discovered appetite for Peru's fresh and diverse cuisine .

"First of all, the products are very high quality and very healthy, which goes in line with today's eating habits," he said. "There's also a balance of flavours - acid; sweet - and it's just a very good combination, colourful, light and fun."

Photo: Heston Blumenthal at Dinner, which the Michelin guide decided to award another star because of its 'glorious celebration of Britain's culinary heritage'. Photograph: David Levene for the Guardian