How Japanese Whisky is Taking on Scotch 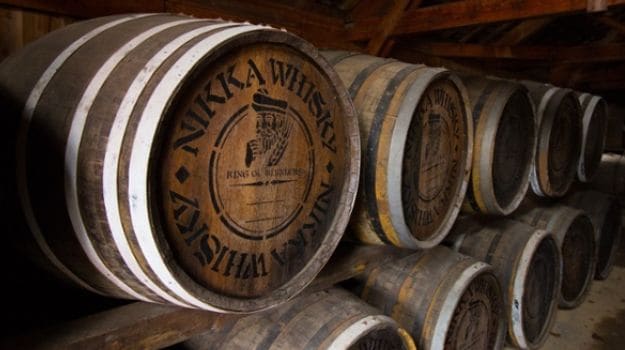 Nikka is a pillar of the Japanese whisky industry. Photograph: /flickr

Why a Japanese tipple could topple the Scots’ top drop

Whisky traditionalists will be in for a shock when they visit the Highlander Inn at Craigellachie. For, alongside an exhaustive list of whiskies from all over Scotland – some exceedingly rare – there’s a sizeable selection from Japan. This is because the head barman was for many years a certain Tatsuya Minagawa of Kyoto. After a spell abroad, Minagawa returned to the Highlander in January this year but this time as the owner.

This link between Japan and Scotland has an illustrious history. In 1918, Masataka Taketsuru made the journey to learn the secret of distillation. He studied chemistry at Glasgow University and then worked as an apprentice at two distilleries, Hazelburn and Longmorn. While in Scotland he met and married Rita Cowan – much to both families’ disapproval. He returned to Japan with his wife and founded Nikka, a company that, along with Suntory, is one of the pillars of the Japanese whisky industry. He built two distilleries: Yoichi, on Hokkaido, and Myagikyo on Honshu. A fictionalised version of their story was broadcast earlier this year on Japanese television called Massan with Charlotte Kate Fox playing a character based on Rita Cowan and Tetsuji Tamayama as the godfather of Japanese whisky.

It’s a familiar story, the Japanese student coming to Britain to learn how to make a product and then returning home to make it better. A similar thing happened with the British motorcycle industry just after the war when representatives from Kawasaki and others toured Triumph. The nascent Japanese whisky industry was built on Scottish components: Scottish stills, Scottish barley and even, it is alleged, Scottish water, were shipped to Japan. Likewise, the Scotch whisky industry has been complacent about foreign competition. The historian, literary critic and whisky aficionado David Daiches once wrote: “Whether any country will ever be able to produce a Scotch-type whisky that is really comparable to genuine Scotch whisky in nature and quality remains doubtful.”

Well, Daiches, now deceased, would have a pleasant surprise if he could try the Nikka Pure Malt Black, a blend from Taketsuru’s two distilleries. It combines chocolatey richness with fiery pepper and great purity of flavour. He’d probably have fallen out of his chair last November when the Yamazaki Single Malt Sherry Cask 2013 won the Whisky Bible whisky of the year, the first time this award has been won by a non-Scotch. Jim Murray, the chairmen of the judges, described it as a “wake-up call” for the Scotch industry.

I think the Scots relish the competition with the Japanese. There’s a mutual respect between the two industries. What must have really stung was that the top-placed European whisky was the Chapter 14 Not Peated, which is from England! You’d be a brave man to order that at the Highlander.