How stress affects your food: from distorted tastes to comfort eating 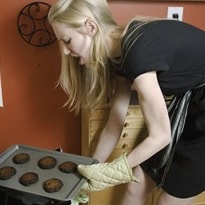 Depression, or just plain anxiety in the kitchen, can play havoc with your tastebuds - and when you're feeling low, you may not be able to gauge how fatty your food is either

Cooking for guests, when you're not used to it, can be hard on the nerves. It's often the stress that is the sole cause of things going wrong - from the jangly clanging of heavy metal utensils dropped on the floor, to kitchen accidents with burned arms, sticking plasters, and so-so food often the end result.

As if reducing you to a clumsy fool isn't enough, anxiety can also distort your perception of taste (which, to be clear, you do with your tongue) and smell (which dominates flavour discernment). It seems logical enough that the mental kerfuffle would divert attention from your senses to some extent, but it actually messes with the chemistry of your tastebuds, too, highlighting how unimaginably complex taste really is. Taste is, to use the scientific jargon, plastic.

A tale of two neurotransmitters

Before Lucy Donaldson of Nottingham University tells me about her groundbreaking work in this area, she has caveats. It is a young field of research that is, she says, still poorly understood, but generally, anxiety and depression (which often co-occur) seem to impair taste and olfaction. An influential 2006 study that Donaldson worked on pinpointed two neurotransmitters that people with anxiety or depression are often low in, as possible causes of the the change in taste perception. The team tested healthy people's taste sensitivity after taking antidepressants that boost levels of these neurotransmitters. When the subjects had enhanced serotonin levels, they were 27% more sensitive to sucrose, and quinine tasted 53% more bitter. And with heightened noradrenaline levels, bitterness was 39% stronger, while sensitivity to sourness increased by 22%.

Therefore, if enhancing levels of these neurotransmitters leads to increased sensitivity, it's certainly possible that lower levels in people with anxiety or depression is what impairs their taste ability. Potentially then, a taste test could help psychiatrists discern whether anxiety and depression patients would benefit more from prescription drugs or talking therapies - those without taste impairment may not have a chemical imbalance in the brain that would respond to antidepressants.

Donaldson's team also wanted to investigate whether these changes in taste function occur up in the brain or on the tongue. So they started testing their subjects' sensitivity soon after giving them the antidepressants. "People got really quite sensitive compared to the control group, to sweet and bitter tastes particularly, within about an hour," she says. It takes around four hours for the drugs to get into the brain in significant amounts. "Our hypothesis," she says, "is that the drugs are working on the chemical transmitters in the taste buds themselves."

It has become accepted in recent years that there are fat taste receptors in our mouths. In June this year, a study by Paul Breslin of Rutgers University looking into the role of mood in taste found that taste sensitivity in his more anxious or depressive subjects (none of them were at the more acute "clinical" end of the scale) was especially dulled against fat. "We were taking skimmed milk and heavy cream and mixing them together to give varying levels of fat," he explains. Not being able to discern how fatty a food is when mildly depressed or anxious has obvious health implications in that it could, as it says in the study, "foster unconscious eating of fatty foods".

What is also interesting in Breslin's study is that his subjects were tested after three different mood-inducing video clips. Happiness was induced by a scene from An Officer and a Gentleman. Sadness was induced by a clip from The Champ. And (I love this), the neutral control clip was from a documentary about the processing and usage of copper.

All of the subjects were able to discern the rising scales of intensity in their taste tests before mood induction. But those higher up the subclinical-depression-and-anxiety scales were unable to tell fatty from not-fat milk after both the happy and sad clips. "If they had high emotional content, they tended to suppress their activity," says Breslin. "This was shown over a few different taste attributes - fat being the more prominent one." Perhaps this explains why food tastes of cardboard when you're around someone you've badly got the hots for.

Stress has the opposite effect

Short-term stress, meanwhile, can swing things the other way and turn the volume up on your smell and taste. Last year another group of scientists found that when they made healthy people stressed, they became more sensitive to glucose and salt. Stress and anxiety are, in clinical terms, different conditions, although they do reinforce and perpetuate each other: "Stress is a nonspecific biological response to a stressor (environmental, physiological or psychological) an organism encounters, and anxiety is a cognitive response with feelings of worry, nervousness and apprehension." It makes sense that, when under stress, the senses would be on red alert.

So perhaps if you're an anxious person, and then get stressed in the kitchen, the two will cancel each other out, taste-wise. You'd probably still be a clumsy fool though. Many medicines, including antidepressants, can produce bitter or metallic tastes themselves, but have you ever noticed things tasting different according to mood?

Photo: Kitchen anxiety: no two ways about it, those biscuits are not going to taste good. Photograph: Olivia Barr/Getty Image

How To Make Kashmiri Kadam Saag - The Comforting Broth Loaded With Good Immunity
Bored With Regular Noodles? You Must Try These 4 Types Of Noodles