How to Cook Perfect Gumbo 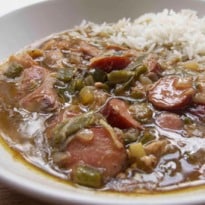 Ask a Cajun who makes the best gumbo and the answer is usually 'mamma'. But should it contain okra or filé powder? Now you're asking.

The spectre of gumbo has loomed large over this column for some months: unable to find a source of filé powder in the UK, it has been twice delayed. The thing is, gumbo is sacred to Louisianans. Everyone's mother or grandmother makes the best version and often it involves several hours standing over the stove, stirring, probably with a special bald cypress wood spoon. I am not from Louisiana and my mother makes stuff like Irish stew. What hope did I have?

But despite contriving to both go on holiday and move house, I finally ran out of excuses - though my fears about nailing the essence of gumbo, the stew that runs through the veins of any self-respecting Cajun, still ran high. Sure, I've eaten some good gumbo in my time, in Louisiana and elsewhere, but making the stuff myself, well that was a whole different kettle of crabs.

According to Howard Mitcham, author of Creole Gumbo and All That Jazz (and, wonderfully, a noted "bohemian, raconteur and 'renaissance man'") gumbo is "an improvisational thing, like early jazz. You just take off with whatever tune is handy and then you travel ... A Creole cook can take a handful of chicken wings or a turkey carcass or a piece of sausage or a few shrimp or crabs and whip up a gumbo."

As the Mitcham quote suggests, there are about as many gumbos as there are mammas in Louisiana: the internet is full of regional variations, always lovingly described as the original, the authentic, the best. It can be as thick as porridge, or as thin as soup; caramel coloured or dark mahogany; bursting with seafood or chock-a-block with squirrel: as Sara Roahen, adopted daughter of New Orleans, and author of the vastly entertaining Gumbo Tales, explains, "It's an intensely esoteric topic ... whatever style a person grows up eating tends to remain her ideal for eternity. If you disagree with that idea, it's clearly because you're impaired in some sad, fundamental way."

So, if you were weaned on gumbo and you don't like my recipe, I can only apologise to you and your mamma. Here goes.

Roahen explains that, surprisingly, the meat is relatively unimportant to the true gumbo aficionado. "Ask any Louisianan cook what kind of gumbo she makes and she'll likely answer with her thickener of choice: roux, okra or filé ... For my first few years in New Orleans, the mode of thickening a gumbo seemed trifling compared to what kind of meat it contained (duck, chicken, hen, rabbit), what kind of sausage, what kind of fat and what role, if any, seafood played. But a gumbo might burst with all of the above plus dried shrimp and turkey gizzards, and if it also contains filé, often it's simply called filé gumbo. No subtitle. Okra can be similarly definitive."

On this basis, and because gulf shrimp, catfish, blue crabs and the like tend to be hard to come by in these parts, I decide to make life easier for myself with a chicken and sausage gumbo. Of course, even this wasn't quite as easy as it sounds - many recipes call, rather vaguely, just for "chicken", both raw and ready-cooked. But in my opinion, any stew worth its salt should include slow-cooked meat and for that, you can't beat legs. Cooking them on the bone adds richness to the gravy but I'd remove the skin, which becomes slimy and chewy after two hours in the pot.

Browning the meat over a high heat first, as Gwen McKee suggests in The Little Gumbo Book, boosts the flavour of the entire dish: Cajun Paul Prudhomme deep fries the legs in a spiced batter. But once the meat is added to the stew, the batter loses its crunch, so this seems like an awful lot of effort for sadly little reward.

The sausage element in the dish's homeland is generally the spiced, smoked pork andouille but the closest agreed equivalent seems to be Polish kabanos, available in many British supermarkets and eastern European grocers.

I also tried chorizo, on the basis it's both smoky and spicy but, although delicious, it makes everything taste unmistakably Spanish. Kabanos lend a subtler savoury note to the gumbo - don't add them at the beginning of cooking, however, or they'll become rubbery.

This, then, is the essence of gumbo. McKee, a native of Baton Rouge, claims "no self-respecting Cajun would dream of making gumbo without a roux". This isn't roux as we know it, however - toasted to within an inch of burning. Roahen notes many New Orleans cooks use their own skin as a colour guide ("Sporting the pallor of bechamel sauce myself, I cannot emulate this technique," she confesses sadly).

It can be anything from Jamie Oliver's "peanut butter" to Prudhomme's "dark red brown to black" - nerve-wracking stuff indeed, which can take up to an hour of coaxing to achieve. The bitter, slightly smoky flavour isn't to everyone's taste and is decried in some Louisiana circles as a modern, cheffy affectation. But I prefer it to the "nutty brown" version in Roy F Guste Jr's 100 Greatest New Orleans Creole Recipes, which is so mild it could pass unnoticed as a British chicken stew. (Guste Jr is the great-grandson of the founder of New Orleans' famous Antoine's Restaurant, which serves a considerably darker version.)

American magazine Cooks Illustrated pooh-poohs the notion that the roux needs to be cooked as gently and slowly as possibly, deciding sensibly that 20 minutes is the maximum amount of time anyone wants to stand over a pan - in any case "testers discerned little difference in flavour", according to their New Best Recipes book. Starting with really hot oil makes a considerable difference, although I find the 200C oil Prudhomme uses, fresh from frying the chicken, a bit too scary to work with.

Once I've nailed the technique, I try making roux with lard and butter but find them too heavy - chicken fat will provide the necessary richness in any case.

Okra, that much-maligned vegetable, is another popular thickener - indeed, a poster on the food forum egullet.com gives a recipe for okra gumbo "done the old-timey way in Vermilion parish, Louisiana", which bypasses the roux altogether in favour of okra cooked so long and slow that it breaks down completely, to thicken the sauce. It's good but once I've added a litre or so of stock, noticeably thinner than the other gumbos. I like the flavour and texture of the okra itself though - definitely one for the pot.

Traditionally okra was used in summer, when it was in season. The rest of the time, filé powder, made from ground sassafras leaves, proved a happy substitute. These days, you can get okra all year round and some cooks believe that filé goes with meat and okra with seafood, or vice versa, but I find recipes using both, including one from Roy F Guste Jr which adds filé to a gravy already thick with roux and okra. It's too much: thick, gloopy and distinctly vegetal, I think I'll save the filé for people to sprinkle to taste, as McKee suggests.

I like my gumbo quite thin - the sort served in a bowl or a cup, rather than on a plate. This demands plenty of liquid: McKee uses water, but I think the chicken stock used in the other recipes makes a better sauce.

The egullet poster My Confusing Horoscope adds tomato sauce, contrary to the general opinion that tomatoes are only acceptable "above the I-10". But wherever you're from, I don't think the gumbo needs the extra flavour: the smokiness of the roux and sausage and the sweet herbaceousness of the Cajun "holy trinity" (onion, celery and green pepper) should be sufficient. Tomatoes, like chorizo, just take over.

Many recipes suggest adding hot liquid to hot roux, McKee and Prudhomme included. This, I notice, makes it very difficult to blend and I understand why when I read the Cooks Illustrated recipe which, on advice from food science guru Harold McGee, uses cold liquid instead. "By adding cooler stock, the roux and the stock have time to blend thoroughly before the whole mixture comes up to temperature and the starch gelatinises, resulting in the smooth consistency we were seeking." Bingo.

Most of the gumbo recipes I try are pretty conservative on the spice front: seasoning the chicken with black pepper, salt and cayenne is about as far as Prudhomme will go, and Guste adds nothing but salt. McKee, however, suggests a Cajun seasoning involving garlic and onion powders, nutmeg, dried parsley and optional monosodium glutamate. I like the bay leaf she adds to her gravy but I'm not sure about all the spices: the gumbo doesn't seem to need them - ditto the Worcestershire sauce she adds. Her use of Tabasco, however, is inspired: as well as heat, it supplies a piquancy which rounds things off nicely.

Cooks Illustrated replaces the green peppers with red, on the grounds that they prefer their "sweeter, fuller flavour". I like the slight bitterness of the green - and even if I didn't, I'd never dare mess with the Holy Trinity. I've seen Live and Let Die.

1. Remove the skin from the chicken and dust with salt, black and cayenne pepper. Leave to sit for at least half an hour (you can prepare the rest of the ingredients while you're waiting).

2. Set the flour, onion, pepper, celery and stock out beside the stove. Heat the oil in a large, heavy-based pot (not non-stick) over a medium-high heat and then brown the chicken well, in batches if necessary. Set aside.

3. Turn the heat down slightly and scrape any bits off the bottom of the pan, then stir in the flour. Stir over a medium-low heat until it reaches a deep, rich brown colour, about the shade of melted milk chocolate. (If you are very brave and like bitter flavours, you can take it to dark chocolate.)

4. Tip in the onion, pepper and celery and cook, stirring, for a few minutes until softened.

5. Gradually stir in the stock, little by little, until you have a smooth sauce, scraping the bottom of the pot as you do so.

6. Add the chicken back into the pot, along with the bay leaf, and bring to a simmer. Turn down the heat, cover and simmer for an hour and a half.

7. Add the okra and sausage, stir, replace the lid and simmer for a further 45 minutes.

8. Remove the chicken (keeping the pot on the heat) and, when cool enough to handle, strip the meat from the bones and put it back into the pot, along with the Tabasco sauce and salt and pepper to taste.

9. Either serve immediately, with long grain rice and filé powder - if using - to taste, or allow to sit for a day, then reheat to serve.

Gumbo - so many possibilities, so many questions. If you're a native, how did your mamma make it? Where serves the best version, in Britain or the US? Is Polish sausage really the best substitute for andouille and where can you buy filé powder this side of the Atlantic?