How to Cook Rice, Pulses and Meat in a Pressure Cooker 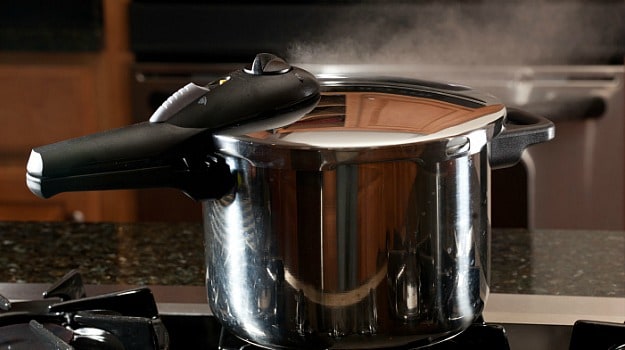 Remember the heavy metal pot of the 90's, rattling on the stove, poking your paranoia and waiting to explode? And the times when you walked into the kitchen and saw the night's dal dripping from the ceiling, and you mother cleaning it off, one tile after another. Aren't we glad those days are a thing of the past? But we hope your cooker isn't.

Savvy ovens, efficient microwaves and compact grills may have been introduced to your fully equipped kitchen, but so have new and improved versions of our favourite culinary relics.

Before the pressure cooker, cooks tried to make this mechanism using stones to weigh down the lid of the cooking pot. This led to the invention of a sealed lid by one Frenchman, thus giving birth to the first pressure cooker. If the thought of it exploding in your kitchen is what stops you from using one of these speedy cooking pots, then drop the worry. It used to happen many, many years ago when a lot of these products were put out in the market, despite failing product safety tests. This doesn't go to say that modern cookers can't go 'boom', but the chances of it happening are relatively low.

Earlier, the only version of the cooker available was one with a weight and a jittery top. But now, you've also got electric cookers, some of which can be enabled by your smartphone.

Is the Food Cooked in a Pressure Cooker Healthy?

Cooking in a pressure cooker is good for more reasons than you can imagine. For starters, it retains all the important vitamins and minerals which are probably lost in other cooking methods. Secondly, the food is cooked about 70 percent quicker than usual and also requires lesser energy. Meat remains moist which is why you'll see that a lot of home cooks make Indian curries in a pressure cooker. Vegetables also retain their colour, texture and taste. You also won't have oily splatters spread over the kitchen top.

But a large set of people believe that using a pressure cooker isn't healthy at all. That's because the food is cooked at an extremely high temperature which kills nutrients. And also because it negates common logic about slow cooking being healthy. But I'm about to disprove the theory.

How does a pressure cooker work?

As the name suggests, a pressure cooker traps steam in the cooker and uses the vapour from water to cook. An important safety measure to be noted at this point would be that you shouldn't open the lid of the cooker while it still has steam in it. You might end up getting hot steam or hot food over yourself.

Be it risotto, the sublime short ribs or the delicious cheesecake, your pressure cooker is the most fascinating kitchen appliance that can do wonders to the flavour of your food.

Like all the other devices you own, the pressure cooker also comes with a manual. One that you should read before you add it to the pile of old newspapers. But in case you've already tossed it out, go through these brief, but thorough guidelines.

1. Cooking with liquid - Since the working principle of the pressure cooker is based on steam, you need to add the right amount of liquid. Use at least one cup of water, but don't fill up the cooker more than half way.

2. Heat It Right - Another important detail you must keep in mind is 'heat'. For food to be cooked, it requires a lot of steam which is created once the water is hot enough. So start your cooking with high heat and once the water comes to a complete boil, turn it down. In case you feel the pressure drop, turn up the heat.

3. Timing - Timing should be as important, if not more, as heat. The higher the pressure the lesser time it needs to cook. So once your water has come to complete boil, pressure will build gradually. And depending on what you're cooking, you'll have to know when to stop.

Now that you get the basics of a pressure cooker, it's time to get down to specifics because as the saying goes - 'the devil's in the detail'. You can use a pressure cooker to cook anything under the sun - beans, lentils, meat, rice, vegetables and even desserts.

No two pulses are the same and so all of them have different cooking times and require different amounts of heat. Usually, it depends on the age of the lentil and beans. If you come face-to-face with lighter pulses like pigeonpea (arhar or toor dal), yellow moong, green moong or Bengal gram (chana dal), then the ratio of lentils to water should be 1:2.  Then, cook them on a low flame and lower the heat gradually.

If you want to cook chickpea or kidney beans, then first, soak them for at least 8 hours. Drain the pulses and cook them in a lentil to water ratio of 1:3. Once the pressure has been released, take off the lid and let it rest.

Note: Add about one and a half tablespoon of olive oil and 1 teaspoon of salt to the pressure cooker. This prevents the lentils and pulses from foaming.

Like pulses, the amount of heat and cooking time also depends on the kind of rice you're cooking. In the case of white rice, the ratio of rice to water should be 1:1.5 and you should start by cooking it on high heat and then once the pressure is at its peak, reduce the flame and cook for about 3 minutes. In the case of brown rice, the ratio should be 1:2 and it should be left on high heat till the pressure builds. Then, reduce the flame to medium and let it cook for about 17-18 minutes.

In case you want the rice to be stickier and softer, add one fourth cup of water.

Note: Brown or wild rice is not heavily milled like the other rice varieties and thus, contain very little starch. You don't have to rinse them that before cooking and they have a naturally tendency to stay as separate grains.

To perfectly cook veggies in the cooker, first make sure you cut them evenly. A sure shot way to retain important vitamins and minerals is to put the veggies in a steamer basket with minimum water in the cooker. The leftover water can also be used as stock.

Green veggies and carrots - It's ideal to cook green veggies on a high flame. But use the 'quick release technique' to relieve pressure as this helps retain the colour of the veggies and prevent overcooking.

Cooking potatoes and other root vegetables - In case of root vegetables, use the 'natural release technique' since they are hard and the cooking time is more than that of green vegetables.

Need to tame your stubborn poultry meat? Then your pressure cooker will be your new best friend. The pressure cooker, if used correctly, can tender even the toughest of meat. But it's important to sauté the meat before cooking it.

Also be sure to not put too much water because it's meat's worst enemy. The meat itself releases enough liquid and juices for it to braise in. You can also sprinkle some herbs and spices before you shut the lid. Use the 'natural technique' to release pressure as the leftover pressure gradually cooks the meat.