How To Use Pressure Cooker: An Ultimate Guide To Cook Quick Meals 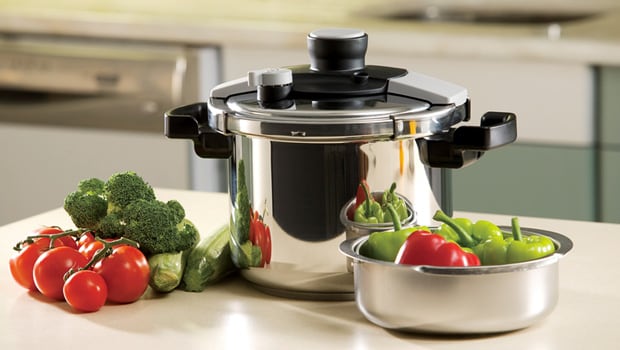 When it comes to cooking food, a lot of us resort to quick and easy measures. In today's fast-paced world when most of us have tight working schedules, it is difficult to take out a large chunk of time just for cooking. To make our daily cooking task easier, the invention of pressure cooker has come to great help. A pressure cooker helps in cooking food quickly and also helps in retaining various vitamins and minerals. This cookware can be an amazing timesaver and can cook meals in minutes.  However, if you haven't yet used a pressure cooker, it's important to understand the mechanism of the cookware.

Let's learn how to use pressure cooker:

(Also Read: How to Cook Rice, Pulses and Meat in a Pressure Cooker)

It is important to understand how to fill a pressure cooker

2. Get On To The Pressure Cooking Process

There are various ways to cook different types of foods like rice, grains, vegetables, meat or seafood. For instance, before adding meat in the pressure cooker, it is always good to season or marinate it beforehand. The instructions or cooking-guide on the box of your pressure cooker can come quite handy here. Each recipe/food needs different amount of water to be added; hence, do consult a user manual so as to determine how much water is needed to pressure cook the meals.

Now, it's time to get started with the cooking process. Once the first two steps are done, seal the lid of the cooker properly; be very careful with this step. Also, make sure that the whistle on top of the cooker is placed properly and there is nothing stuck inside its passage. Then, put the pressure cooker on the stove and bring it on high heat/flame. After a while, the water inside the cooker will transform into steam. The pressure inside the cooker will rise and once it reaches its peak, the steam will eventually get released from the whistle.

(Also Read: Pressure Cooking Versus Open Cooking: Which One is a Better Cooking Technique?)

Seal the lid of the cooker properly

Once the pressure cooking process is done, you can either allow the steam to get released naturally, which will usually take about 20-25 minutes or you can alternatively also place the cooker in the sink and run cold water on the lid. With this method, the pressure level inside the cooker will drop quickly.

Once the pressure cooking process is done, release the steam

Once you are sure that there is no pressure at all inside the cooker, carefully open it and transfer the food in a serving plate. While opening the lid of the pressure cooker, check if there is any sound or any steam escaping. If there is no sound, then it means that all the pressure has been released from the cooker.

You can prepare a variety of dishes in a pressure cooker. Here are two exotic desserts that you can prepare using this handy cookware:

Don't have an oven? No problem! You can bake this delicious and moist chocolate cake in your pressure cooker. The method is similar to that of using an oven. Make the batter and put it in a baking tin. Place the baking tin in a pressure cooker (do not add any water), close the lid and let it cook for about 30 minutes on low flame. This is one of the easiest methods to prepare a chocolate cake. Hurray!

Do you think it's hard to put together a perfect caramel custard? Well, this recipe is for you. Put the batter in a heat-proof mould and place it on top of a steel cup inside the pressure cooker. Fill some water in the cooker but make sure that the level remains below the custard mould. Seal the pressure cooker and let it steam for about 20 minutes. Voila! Delicious caramel custard is ready to be served and savoured.

Now, that we have shared with you some handy tips on how to use pressure cooker, start using it and experiment with different dishes.