How to Cook the Perfect Cheese Grits 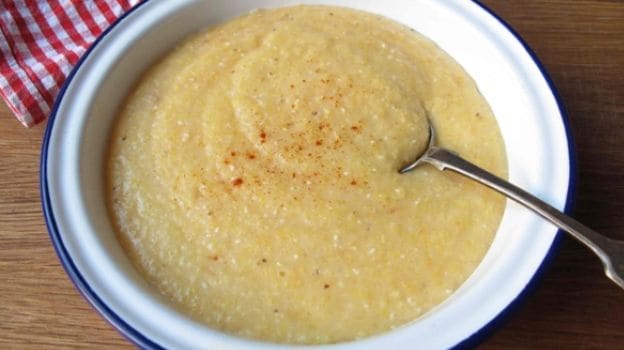 Do you use grits, cornmeal or polenta; cook them in stock, milk or water; and add garlic, onion or chilli? Can grits ever be too cheesy - and are they best with bacon for breakfast or shrimp for supper?

In Britain, grits are those annoying scratchy things that fly at your windscreen in the depths of winter. In the American South, they are breakfast. And not just any old breakfast either: this sloppy corn porridge is a source of fierce regional pride. As the official prepared food of the state of Georgia, grits have become a byword for Southern identity.

The Charleston Post and Courier has even suggested grits are the key to world peace, declaring that given enough grits, "the inhabitants of planet Earth would have nothing to fight about. A man full of [grits] is a man of peace." Peacemakers or not, they are making inroads in the UK on the back of the mania for all things Americana: the Lockhart in London does a quite superlative version with shrimp, and they have popped up on the menu at Red's True Barbecue in Manchester, Squid & Whale in Glasgow, Stovells in Surrey and Norse in Harrogate. But the best way to appreciate this humble Southern classic is at home, preferably with a pitcher of sweet tea and a soundtrack of the blues.

Related: How to cook the perfect cornbread

Tracking down the raw materials for grits is surprisingly tricky in Britain. It is easy enough to find polenta and cornmeal in larger supermarkets but, according to Brad McDonald, the Mississippi-born chef at the Lockhart, all corn is not made alike. He is very firm on the issue: "Polenta is not a substitute for hominy grits. I would never suggest that you make that substitution. Never. Cornmeal is also a completely different product altogether. If you are writing about perfection, you can't suggest any substitutes; you have to begin with the real thing."

McDonald directs me towards Anson Mills of South Carolina, purveyors of goods from "organic heirloom grains" - the creme de la creme of corn dealers. They explain that traditional grits are made from softer varieties known as "dent" corn, which taste different to the harder "flint" corn used for polenta ("more corn flavour upfront ... with supporting floral and mineral notes"). Also, for historical reasons, the two products are milled in a different way, which means they behave differently in the pot.

Unfortunately, although Anson Mills does ship its fine products across the ocean, the minimum order quantity is 10lb (4.5kg), and my freezer is not quite large enough to absorb the excess. However, after much poking around in the back end of Google, a US candy importer in Aldershot saves my bacon. I order stoneground grits, old-fashioned grits and quick grits - the first two coarse, the last rather finer. The more expensive stoneground variety boasts a distinctive speckled appearance that is proof it has been made from the whole kernel, rather than having its hull and germ removed to extend its shelf life. This, connoisseurs believe, is what gives stoneground grits their particular flavour and texture, as well as improving their nutritional value.

The difference is striking: the stoneground grits, both the yellow kind I buy online and the blue variety kindly gifted to me by Dan Doherty, chef at Duck and Waffle and closet grits enthusiast, taste distinctly of corn. The other two are great vehicles for other flavours, but overwhelmingly bland on their own. I can't, however, detect any significant difference in flavour between the various colours. Soaking the stoneground variety, as Edna Lewis and Scott Peacock suggest in their book The Gift of Southern Cooking, is important to allow the skimming off of any remaining chaff, which will make the end product as gritty as the name suggests.

Purists, McDonald tells me, say that you should only cook grits in water with a little salt. Like Lewis and Peacock, he goes for a 50/50 mixture of water and milk; the notorious Paula Deen cooks them in "half and half" (the closest UK equivalent is single cream with a dash of milk) and butter; Kentucky chef Amber Huffman uses chicken stock; and chef Sarah Mastracco goes for equal parts chicken stock and milk. The Joy of Cooking and Virginia Willis, a self-proclaimed grits missionary and the author of an entire book on the subject, prefer water alone.

I find the stock, though delicious, overpowers the flavour of the corn, while the cream makes things distinctly sickly. Milk and water is very nice, but to my surprise I prefer the cleaner taste of those made with water alone, rather than the sweetness of dairy.

Whichever road you go down, however, the most important thing is ensuring you allow enough liquid for the grits to cook. Mastracco goes for a ratio of one part grits to two parts liquid, which simply isn't enough, and I end up with a lengthy washing-up job on my hands. Four to one, as espoused by most other recipes, is about right.

The other important thing to bear in mind with grits is, as with polenta or porridge, low and slow is the way to go. McDonald tells me: "The idea here is to apply only enough heat to let them steep in the liquid and properly fluff up." With stoneground grits, this means up to an hour of patient cooking, but the results are well worth the effort: smooth and creamy, rather than gluey and gritty.

McDonald advises me to stir them constantly to prevent them sticking, which is a very real danger. I find that if I use a heavy-based cast-iron pan, as he suggests, set on a very low heat, I can afford to step away from the pot occasionally, during the first half of cooking at least. (Mastracco suggests covering the pan and leaving it largely to its own devices, which, believe me, is a terrible idea.)

The Joy of Cooking and Deen supply recipes for grits that are simmered then baked. This gives them a completely different consistency to the slightly sloppy, creamy texture I'm aiming for, but they make an excellent side dish.

Lewis, often touted as the standard-bearer for Southern cuisine, is of the opinion that "people should really leave grits alone", and I have some sympathy with that - the onion used by the Joy of Cooking and the garlic in Huffman's recipe completely overpowers the flavour of the corn. Butter and salt are the only musts, as far as the traditionalist is concerned - even a spot of double cream, which Peacock favours to finish the dish, is an unnecessary dilution of the flavour.

However, the greatness of cheese grits cannot be denied. I try Deen's monterey jack and Mastracco's parmesan, but neither measures up to the flavour punch of a good cheddar. Deen, who is not what you might call a calorie-counter, claims: "Sometimes I will accidentally trip when I'm walking across the kitchen with a block of cream cheese, and it falls in there ... You just have to go with it and say, 'Oops!'" Reading this, I instantly resolve to install non-slip flooring by my hob - her grits are so rich and claggy and cheesy, they make me feel a little sick, even without the addition of the extra grated cheese at the end ("because you can never get enough of a good thing").

The Joy of Cooking stirs in cayenne pepper, and McDonald adds a "solid dash" of Tabasco, on the basis that "the vinegar in it opens your palate and allows more flavour in". The chilli heat of both proves an excellent partner for cheese and toasted corn, as anyone who has ever enjoyed a plate of nachos will know all too well. It also means that, although grits are a solid choice for a weekend brunch, especially with a rasher of bacon and a fried egg, they also make a very fine accompaniment to a more substantial meal, whether that is the classic shrimp and grits or something of your own devising. (I happen to think they go very well with sprouting broccoli, but then I do write for the Guardian.)

1/2 tsp cayenne pepper or smoked paprika, or good dash of Tabasco or other hot sauce

Put the grits in a large bowl, cover with cold water and stir. Leave to sit for a minute or so, then skim as much of the floating chaff from the surface as you can, and drain.

Bring the water to a simmer in a large, heavy-based pan (a cast-iron one is ideal). Dissolve the salt in it, then stir in the grits. Turn down the heat very low, and cook, stirring very regularly, until the grits start to thicken - they should be steaming rather than bubbling.

Stir continuously until the grits have thickened to your desired consistency - a fairly sloppy porridge is usual, which will probably take about 45 minutes. Take off the heat and stir in the butter, cheese and cayenne, paprika or Tabasco to taste.

Grits: one of those things you have to grow up with to truly appreciate, or polenta's humbler but hotter cousin? If you are a fan, how do you like them - plain in the morning or poshed up at night? And are there any British-grown grits lurking out there?