How to cook the perfect falafel 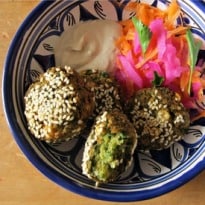 Do you make falafel with chickpeas or broad beans, what do you serve them with - and are they the best vegetarian fast food ever?

They do fast food properly in the Middle East: chargrilled meaty wraps; crisp, wafer-thin pastries; and, of course, the almost ubiquitous falafel fritter. Once almost exclusively the preserve of the vegetarian in the kebab shop, more authentic versions, heaped with nutty tahini sauce and punchy salads, are increasingly charming British punters away from the burger van. Hot and crunchy on the outside, fluffy and herby within, it's no wonder so many countries want to claim the falafel as their own.

The Oxford Companion to Food reckons that falafel's "extremely ancient" origins lie in Egypt, where it is still an immensely popular snack. It is also one of the national dishes of Israel (thanks, according to Claudia Roden, to Yemenite immigrants) as well as showing strongly in Lebanon, Palestine, Syria and Jordan.

Indeed, you can find good falafel everywhere from Baghdad to Bawshar - but, unless you live near one of the small, but growing, number of decent vendors here in Britain, your best bet might be to make your own. Thankfully, it's really quite simple.

Naively, I'd assumed that falafel was always chickpea-based, and stocked up accordingly. How much I had to learn. Yotam Ottolenghi and Sami Tamimi, both of whom have fond childhood memories of stuffing themselves with falafel in Jerusalem, and Sharon Salloum, chef and author of the Syrian recipe book Almond Bar, use just chickpeas ("It's all about the chickpeas," Salloum explains), but all the other recipes I try deploy broad beans as well - indeed, Roden, who uses only beans, reckons they're "far better" that way.

The Comptoir Libanais cookbook and Anissa Helou's Modern Mezze both go for a mixture, Helou observing that Egyptian falafel, like Roden's, is softer than the Lebanese and Syrian version, "perhaps because it is made with only fava [broad] beans". She's right - Roden's variety are fluffy, almost melt in the mouth. The Comptoir Libanais preamble further explains that "the starch in the fava beans does a better job of holding the mixture together", which makes sense as I find Salloum's falafel particularly prone to crumbling - Ottolenghi and Tamimi add flour and water to the mixture, presumably to act as a kind of glue, while reader and falafel fanatic Richard Caddick tells me he adds egg to his.

Beans are thus a must - I found them at a Middle Eastern grocers, but they're available online. (Look for the ready peeled sort; peeling the things is fiddly enough work to make even the dampest supermarket falafel start to look attractive.) However, like Helou, I miss the chickpeas in Roden's recipe; they add a certain nutty flavour, and, more importantly, as they're harder to grind down very finely, a pleasing variation of texture to the dish, so like her, I'm going to use a mixture of the two.

Opinions are divided on the most desirable texture for a falafel mixture. Comptoir Libanais reckons the pulses should be very finely minced rather than pureed, while Helou and Roden insist on "a soft, smooth paste", with the latter suggesting that "the longer you process, the better". As previously mentioned, the beans make the mixture easier to shape, and this seems to be particularly true if it's very finely ground. I do like the nubbly crunch of Comptoir Libanais' version, however, so to ensure a contrast, I've decided to leave half my chickpeas coarsely ground.

Everyone uses some sort of raising agent, whether bicarbonate of soda or baking powder, to make their falafel extra fluffy. As there doesn't seem to be much in the way of acid in the recipe, I'm not surprised to find that Ottolenghi and Tamimi and Roden's baking powder proves more effective.

The naturally bland pulse can absorb a good deal of flavouring - whether onion (Ottolenghi and Tamini, Helou and Salloum), spring onions (Roden and Comptoir Libanais) or garlic (all of the above). I find raw yellow onion rather a harsh addition, preferring the greener taste of the spring variety. Roden, who, like Helou, uses a striking amount of garlic, describes her falafel as "so much better than anything you can buy - very herby, spicy and garlicky" and I'm inclined to agree: the more garlic the better here.

Comptoir Libanais uses celery and green chilli, neither of which I'm particularly keen on; the celery is surprisingly dominant, and the heat of the green chilli feels like it belongs to a different dish.

This wouldn't be a Middle Eastern recipe without heaps of fresh herbs. Forget the sad little supermarket bundles and try to find yourself a proper market stall bouquet, if possible. Parsley is popular, used by everyone but Helou, but so is coriander, which makes its way into all the recipes. I like a combination of the two - the sharp, pepperiness of parsley and the aromatic freshness of coriander, both in sufficient quantity to turn the mixture a bold green colour.

Ground coriander and cumin are also pretty much a given, and I like the fiery sweetness of Helou's Lebanese seven-spice powder, with its ginger, cinnamon and allspice, which balances beautifully with the savoury garlic and peppery herbs. Some recipes use cayenne pepper, paprika or chilli flakes too - I find the warmth of the ginger sufficient for a dish that is rarely hot as opposed to spicy, but if you feel the need, add a shake to taste.

Salt is also extremely important in a dish that, badly seasoned, can tend towards the dull, which is why it's a good idea to fry up a little to test the mixture before shaping.

Chilling the mixture before cooking helps with the shaping. The size of the falafel seems to vary, from the 40g Comptoir Libanais monsters to Roden's diminutive 4cm discs. She and Salloum recommend shaping tools, which I discover inside a box of Lebanese falafel mix in the grocers, but I find the Roden-sized versions too crunchy; making them bigger allows for a greater variation of texture between the crisp outer and fluffy interior.

Ottolenghi and Tamini roll their falafel in sesame seeds to coat, which looks handsome and makes the exteriors extra crunchy.

Deep-frying proves, sadly, the best option; Comptoir Libanais does give a shallow-fried variation, but it is disappointing enough that I can't recommend it. Remember, if you put enough salad on top, it's basically health food anyway.

Soak the chickpeas and broad beans in separate bowls of plenty of cold water overnight. Drain and tip on to a clean tea towel to dry.

Put all the beans and half the chickpeas into a food processor and whiz until smooth (be careful not to overload your processor). Add the spices, salt, spring onions and garlic and whiz again, until well combined. Finally, add the remaining chickpeas and fresh herbs and pulse until chopped and well combined, but not pureed - the mixture should still be lumpy with chickpeas.

Heat a little oil in a small pan over a high heat and fry a teaspoon of the mixture to check the seasoning. Adjust if necessary, then stir in the baking powder. Chill the mixture for at least 30 minutes.

Roll the mixture into small, flattish balls, about 5-6cm across, and roll briefly in the sesame seeds.

Heat 5cm oil in a deep pan to 180C/350F, then fry the falafel in batches and drain on kitchen paper. Serve with tahini sauce, toasted flatbreads and plenty of salad.

Where do you stand on falafel? Chickpea or broad beans, coriander or parsley, chillies or sweet spice - or are you yet to be converted to the joys of the deep-fried pulse? What do you serve with yours (salad ideas particularly welcome), and what is the best you've ever had?