How To Make Karupatti Halwa - A Popular Dessert From Tamil Nadu

The process of making Karupatti or palm jaggery in Tamil Nadu is quite similar to how Nolen gur is made in Bengal. 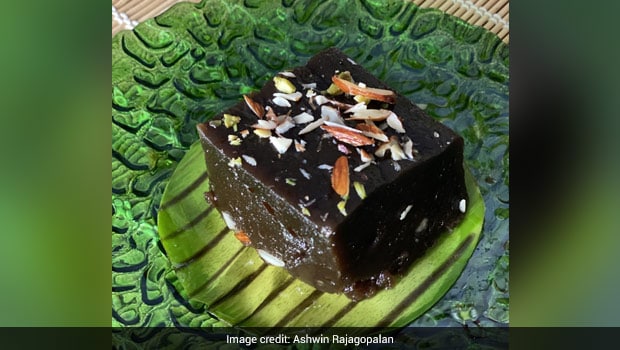 There's a mellow, almost smoky sweetness when polished white sugar is substituted with palm jaggery. When it comes to Indian sweets, I'm usually torn between Bengali delicacies and traditional South Indian sweets like Adhirasam. Just like my soft corner for Bengali sweets with Nolen Gur, I enjoy sweets that use Karupatti, a popular sweetening agent in Tamil Nadu.

The process of making Karupatti or palm jaggery in Tamil Nadu is quite similar to how Nolen gur is made in Bengal. An earthen pot is placed under a palm sapling that is skilfully sliced. The sap that oozes from the sapling is collected in these pots usually in the cooler months of the year. The pots are coated with slaked lime to ensure that the sap does not ferment. The unfermented juice is filtered and then boiled till it bubbles in iron vats. Once it's cooled it is poured into moulds - most farms use coconut shells for the moulds. Once it is 'set' in these moulds, the karupatti or Karuppu (black) patti is ready for consumption.

Pollachi (in Tamil Nadu's South West and close to Coimbatore) and its surrounds are among the most photogenic pockets of Tamil Nadu. This area is a recurring backdrop for many Tamil films set in a rural milieu. It's also in the heart of the Kongunad region that were under the reign of the famous Chera dynasty during the Sangam era (1st to 4th century CE). The region's cuisine is distinct and has finally been put under the spotlight at a time when micro-cuisines across India are enjoying much deserved recognition. Chef Sheik Mohideen who helms the Savya Rasa chain of restaurants (that serve authentic Southern Indian cuisine) is proud of his Kongunad roots. He spent a lot of time in the region in his quest for authentic heirloom recipes. His travels took him to a farm near Pollachi where he watched local farmers make jaggery. His Karupatti experience didn't end there. He also got to sample a delicious sweet made with Karupatti. Chef Sheik believes that one of the reasons why Karupatti has emerged as a popular sugar alternative among the health conscious, is its rich iron content.

Karupatti has emerged as a popular sugar alternative among the health conscious.

The locals call it Kongunad Karuppati Halwa; this is now one of the best sellers at Savya Rasa. There are different versions of this sweet in Tamil Nadu. I've also enjoyed sweets like the Karupatti Mysore Pak or Karupatti Jangiri at Ananda Sweets in Coimbatore that are popular with dessert fans who don't like their South Indian sweets cloyingly sweet. It's the same reason I am fond of the Karupatti Halwa, a melt-in-the-mouth, gelatinous sweet crafted with reduced palm sugar syrup, rice flour and ghee. The textures and the gloss of this sweet add to its appeal. You can try making this sweet at home; you can also find versions of this sweet for sale on online platforms.

. Sugar - 100gms (Can be adjusted based on your palate and the sweetness of the palm jaggery)

1. Soak the jaggery in a litre of water and make a syrup by boiling and then straining it.

1. In a thick pan or a vessel heat the jaggery syrup and allow it to reach the boiling point.

2. Add the rice flour to the boiling syrup and stir constantly till the mixture gets thickened.

3. Add ghee at regular intervals and stir it constantly till the mixture does not stick to the pan. This is a key step.

4. Grease the tray or bowl with ghee and transfer the cooked mixture.

5. Top it with sliced almonds and pistachios; allow it to set.

6. Cut them in to desired shapes.