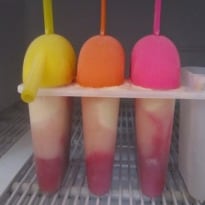 Summer holidays, a heat wave: cue endless requests for ice lollies. I bet my children that I could mak a better ice lolly than those sold for a pretty penny by the hypnotic Mr Whippy van. They were anything but convinced.

Certainly, my homemade ice lollies wouldn't come with any whizz-bang wrapper with rocket ships or space aliens or the hankered after (by the eldest in any case) lurid blue colouring, but I knew, taste-test style, mine would win hands down.

And I was right - in the words of my seven-year-old: "These are better than the van and even better than that London ice-cream shop." So it's settled - for optimum taste and icy satisfaction, get some ice lolly moulds and make your own.

By all means make extra and serve the poached peaches, raspberries, raspberry sauce and vanilla ice-cream as a pudding, using leftovers to make these - you don't need much to fill an ice lolly mould after all.

If using fresh peaches, first make a stock syrup of 50:50 water and sugar (enough to submerge the peaches in the saucepan) and bring to the boil. Lower the temperature and add the peeled peaches.

Simmer for 8-10 minutes until the peaches are soft and cooked through and leave to cool in the liquid.

Blitz the poached peaches in a food processor with a little of their cooking liquid to make a thick smoothie (if using tinned, use a little of the surrounding juice)

Reserve 2 raspberries each for the bottom of the moulds, blitz those remaining with the ½tsp sugar and pass the mixture through a sieve.

To assemble the ice lollies, add the whole raspberries to the moulds, spoon enough of the raspberry sauce to cover a third of the mould, add the peach smoothie to bring the mould up to two thirds full and finally fill the remaining third with the slightly softened ice cream, pressing it down flush to the top of the mould. Add the ice lolly holders and freeze until solid.