How to Make Perfect Cornish Pasties 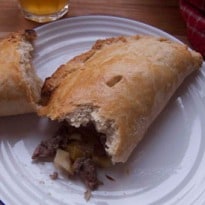 Traditional recipes call for shortcrust pastry encasing beef, potatoes, swede and onion - but do you prefer cheese and onion, chicken and vegetable or even a clanger or a bridie?

As a fully paid-up emmet (a derogatory Cornish term for tourists, which I can't resist pointing out derives from the Old English word for ant), I feel almost as nervous venturing a recipe for a Cornish pasty as I did exploring the exotic landscapes of the Southern gumbo and the Goan fish curry.

In my defence, pasties were once enjoyed throughout these isles - C Anne Wilson's excellent history of British food records whole chickens and joints of meat getting the pasty treatment back in the 15th century, as well as porpoise-meat versions for religious fast days. The Cornish, with typical grit, have just hung on to their packed lunches a bit more stubbornly than the rest of us.

Indeed, they have even gone so far as to defend them against corruption with a European PGI, or Protected Geographical Status, which dictates that, to be worthy of the name, the pasty must be a robust savoury pastry filled with raw beef, swede, potato and onion - and, of course, be made west of the Tamar.

The old story that the Devil was afraid to cross that river thanks to the "well-known habit of Cornishwomen of putting everything into a pasty" suggests the strictness regarding ingredients was not always the case - certainly the 1929 book Cornish Recipes Ancient and Modern, issued by the Cornwall Federation of Women's Institutes, supplies 15 recipes for pasties, from apple to turnip, with none given greater weight than any other. But there we are. As an emmet, I'll be sticking to the official version, whatever the history. Although, I apologise, the Guardian refused to send me to Cornwall to make it.

Those same Cornishwomen claim that "any good pastry may be used but it should not be too flaky or too rich". What is important is that the pasty should be "robust", as the PGI makes clear - originally, according to the Oxford Companion to Food, all pasties would have been made "to recipes and baked in a way that would make it too tough to be eaten". The shell was just there to protect the filling, both from the heat of the oven, and for ease of transportation (pasties were, of course, popular with the county's tin miners).

These days we prefer to eat the stuff, but still, Gary Rhodes' suggestion of puff pastry in New British Classics, while delicious, does not yield the kind of pasty that one could merrily pop into a pocket and take down the mine. No backbone, these fancy foreign pastries.

Everyone else uses a variation on shortcrust - the WI version, using lard, is crumbly and a bit dry, while the all-butter pastry I take from Ann Pascoe's Cornish Recipes (a little book published and printed in Cornwall in 1970, and given to me by a kind Cornishwoman-in-exile in Hackney), is better but, conversely, too soft.

Mark Hix goes for a mixture of butter and lard in his British Regional Food, which is crisper, but my favourite variety comes from the Cornish Pasty Association [PDF]. The CPA uses a mixture of shortening and margarine (Richard Bertinet explains in his book Pastry that margarine "gives the traditional flaky softness required"), and strong bread flour rather than the usual plain because you "need the extra strength in the gluten to produce strong pliable pastry". Almost fluffy inside, it's definitely sturdy enough to survive dropping down a mine or two, but I think, perhaps heretically, that it lacks a little flavour, so I'm going to replace the shortening with lard. If you don't eat pork, however, feel free to stick with their version.

As those Cornish bakers explain, it's essential to rest and chill the pastry before baking the pasties: it makes it far easier to roll out, and means they keep their shape better in the oven. They wait for three hours, but, impatient as ever, I find two quite sufficient.

The 1922 Cornish pasty recipe supplied in Florence White's Good Things in England, and attributed to St Ives, uses beef steak and calves' liver in the filling, but these days, of course, only steak is permissible. The WI vaguely talks only of "fresh steak", but I find the best cut to be skirt: Mark Hix's rump (ahem) doesn't have quite the right texture, and the chuck I also try doesn't seem to have enough fat, and consequently makes the resulting pasties rather dry. Skirt, which comes from just below the diaphragm of the cow has an excellent flavour, and, when cooked slowly and gently like this, a tenderness other cheap steak cuts lack.

Mark Hix cocks a further snook at Cornish convention by precooking the meat and vegetable filling. Browning meat obviously improves the flavour, but with pieces this small, it also dries it out slightly.

No debate here: carrots are "sacrilege" as the Cornish Pasty Association points out: the swede adds all the sweetness this dish needs. Older recipes tend to be vague on exact details but potatoes should be waxy, as the CPA makes clear, rather than the floury ones Mark Hix uses, so they keep their shape when cooked.

There's also no need to precook them as he does: as long as they're cut into equally sized pieces, they'll cook through in the oven, and the delicious, caramelised sweetness of his sauteed onions is wrong here. There's still a hint of the harsh flavour of raw onion in the other versions that seems an essential part of the pasty's flavour.

I'm not quite sure why Gary Rhodes cuts his vegetables into thin slices and piles them up in neat layers - perhaps to ensure a little of each in every bite? - but it makes his pasties hard to seal, and looks a little weird to my mind. Definitely not the kind of artful presentation I've ever encountered in their homeland.

Although the meat and vegetables will cook in their own juices in the pastry, adding a bit of liquid to help things along and create a little gravy, certainly doesn't hurt; I find the WI recipe sadly dry. There's no need to go quite as far as Mark Hix, however, who puts an awful lot of work into his filling, reducing stock and Worcestershire sauce to coat the meat in a deep, savoury stickiness - delicious, yes, but quite different to the plain flavours of the traditional pasty, which need no such embellishment.

A drop of water is quite sufficient - Cornish Recipes uses a mere 3tbsp - but Gary Rhodes' butter is even nicer, adding a subtle richness to proceedings. I can't resist the Cornish Pasty Association's blob of clotted cream, however; two Cornish classics in one.

To ensure a crisp, golden pastry shell, and a tender, juicy filling, start the pasties off in a hot oven, as Mark Hix, Gary Rhodes and Cornish Recipes suggest, then, once they've got a healthy glow, lower the temperature to cook through. And make sure you leave them to cool slightly before devouring - burnt tongues are strictly for emmets.

To make the pastry, put the flour into a mixing bowl and grate in the lard. Add the margarine and salt, and rub the fat in until the mix becomes crumb-like. Mix in just enough cold water (probably about 175ml) to bring it together into a dough - a food mixer is useful here, as it will take some time. It's ready when it comes cleanly away from the side of the bowl. Wrap and chill for 2 hours.

Cut the beef and vegetables into evenly sized dice. Mix and season well.

Roll out the pastry on a lightly floured surface to about 5mm thick and cut out circles to your desired size.

Divide the filling between the pastry, leaving space around the edge and top each with a dollop of cream or butter.

Brush the edge with egg wash, then pinch the edges together to seal. Crimp as desired, and cut a small hole in the top of each.

Preheat the oven to 200C/gas mark 6 and brush the pasties with egg wash. Bake for 20 minutes until golden brown, then turn the heat down to 160C/gas mark 3 and cook for another 20 minutes.

Are Cornish pasties your favourite kind, or will you admit to a sneaking fondness for cheese and onion, chicken and vegetable - or even porpoise? Does anyone have any other regional pasty recipes to share (do the Bedfordshire clanger or the Forfar bridie count?), or are us emmets all whistling into the Atlantic wind where pasties are concerned?