How to Make the Perfect Cucumber Sandwiches 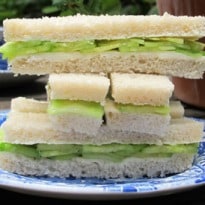 They may seem simple, but cucumber sandwiches can be a soggy, dull disaster. Where do you stand on peeling, slicing, seasoning and salting, should you cut the crusts off - and is the addition of Marmite an abomination?

Yes, this week's column really will consider the best way to make this simple summer sandwich. I make no apologies for the fact, because, if the round I had last week (in a hotel with some pretensions to Doing Things Right) was anything to go by, the country is in sore need of a refresher course.

Bread the consistency of wet cotton wool, a textural horror only relieved by its dry, slightly curling edges, filled with slimy, unseasoned wedges of cucumber and a greasy substance I suspect (though of this I have no proof) to have been margarine - the trauma was enough to send me screaming into the arms of a stale scone.

The whole point about cucumber sandwiches is that, unless done really well, they're as dull as the sum of their ingredients. They glory in their own delicacy: rumour suggests the nutritional redundancy of a thin, white bread sandwich filled with a fruit that's 96% water was intended to celebrate the sedentary lifestyles of the Victorian upper crust. Certainly they're not going to sustain anyone through a hot afternoon at the plough, but it's this very insubstantiality that attracts me - they're perfect for afternoon tea, because, unlike a ham or a cheese variety, they won't spoil your appetite for dinner.

Should you need any further persuading of the merits of this excellent dish, the cucumber sandwich was last year lauded by American scientists as the best thing to eat to regulate body temperature and stave off dehydration during a heatwave. Admittedly, their formulation recommends wholemeal bread, crusts left intact, and spread with mayonnaise, but hey, what do they know? They're American.

Peeling is mandatory, presumably in case some pesky fibre creeps into this most refined of meals. Rose Prince also removes the seeds in the New English Kitchen, but, although sogginess is fatal in a cucumber sandwich, I find I rather miss these liquid centres - the sandwich seems almost dry without them. If, for some reason, you have to make them in advance, however, seeding would be wise.

Anton Edelman, a former maître chef de cuisine at the Savoy, slices his cucumber into strips lengthways. This naturally results in some slices boasting a preponderance of seeds, which is less than ideal. Perhaps at the Savoy they throw such bits away, and at £48 a person for afternoon tea, they can afford to, but I'll be sticking with the more usual rounds.

Leslie Geddes-Brown, writing in Country Life magazine, dunks these briefly in white wine vinegar before layering them on the bread. I can see where she's coming from: the burst of acidity is pleasant, but it also spoils the fresh flavour of the sandwich, giving it just a hint of gherkin.

Lemon juice would probably work better, but after salting the cucumber, as recommended by Gary Rhodes in New British Classics, Prince and Simon Hopkinson, I don't think it's necessary. The salt draws out some of the liquid from the cucumber, leaving it firmer and less prone to sliminess, while also bringing out the flavour - 20 minutes is quite sufficient, though: I find Prince's overpoweringly saline after an hour.

A soft white, the softer the better, seems to be the order of the day - this is definitely not the place for chewy sourdough or wholesome wholemeal. It should almost melt in your mouth once you cut the crusts off, but not quite: I'm not one of those people who think that there's any place for cheap white sliced of the type often fondly known as "plastic bread". Real bread also comes in the soft white variety, and worked a treat in most of the sandwiches I tried.

Hopkinson uses pain de mie, which he describes as "a firm-textured, almost creamy-tasting bread with the palest yellow, fine crumb". Rich with milk and butter, it's too sweet for my cucumber sandwich. Dave Cruz, on the Opra Winfrey website, goes for brioche, a yet richer bread, full of butter and egg, which is even less suitable as far as I'm concerned, as well as being quite hard to slice neatly.

Although Rhodes concedes you could use mayonnaise instead, there doesn't seem much point: butter and cucumbers are a winning combination. As any experienced sandwich maker will know, it also acts as a handy seal between filling and crumb, protecting the latter from any dampness that threatens to make it soggy.

Edelman beats his with creme fraiche and chopped egg to make a more substantial layer: delicious, but it makes the cucumber an also-ran. Cruz, meanwhile, eschews it altogether in favour of cream cheese, which makes his more a cheese sandwich with added cucumber.

Geddes-Brown uses salted butter, but most other people specify unsalted, with good reason. I rarely buy it otherwise, but this is one place where its creamy sweetness comes into its own in contrast to the salty, refreshing slices of cucumber.

No further salt required, obviously, after treating the cucumber, but pepper is very welcome. White pepper, as suggested by Hopkinson and Bee Wilson, is preferable here: it delivers the same spicy hit as black pepper, but without the accompanying aromatics, which compete with the cucumber for flavour.

Cruz also uses chopped mint in his sandwiches, which seems to be a popular choice in the States. It is an excellent partner for cucumber - I'd say together they sum up the taste of a British summer - but again, too dominant here.

Joanna Weinberg admits to spreading her sandwiches with Marmite in How to Feed Your Friends with Relish. I have never found a situation in which Marmite wasn't welcome, but I will concede that a really refined sandwich demands a little more subtlety in the flavour department. (That said, give it a try. It's great.)

I won't weigh into the quarters v triangles v fingers debate, except to say that fingers, the most time-consuming and dainty of the lot, are to my mind the most suitable here. I will second the advice of Hopkinson, and urge you to press the sandwiches down firmly as you cut: it will make them neater. And where a cucumber sandwich is concerned, neatness is really rather important.

Cut the cucumber into slices as thin as you can make them, and put in a colander or sieve. Sprinkle lightly with salt (don't go overboard) and leave for 20 minutes. Taste to check you haven't oversalted them: you can rinse them at this point if so.

Lay out a few pieces of kitchen paper on the work surface, place the cucumber slices on them, and pat dry with more paper.

Lay out the bread and butter each slice generously. Arrange the cucumber on half the slices, overlapping each round, and sprinkle with ground white pepper. Top with the remaining slices.

Pressing down firmly, cut the crusts off, and then cut into neat fingers, triangles or quarters of roughly equal sizes. Serve immediately, with good tea.

Cucumber sandwiches: are you a fan, or are they a silly Victorian affectation that deserves to go the way of the top hat and the whalebone corset? And if not, what do you like to do with this most refreshing of summer crops?

Perfect cucumber sandwiches. All photographs: Felicity Cloake for the Guardian